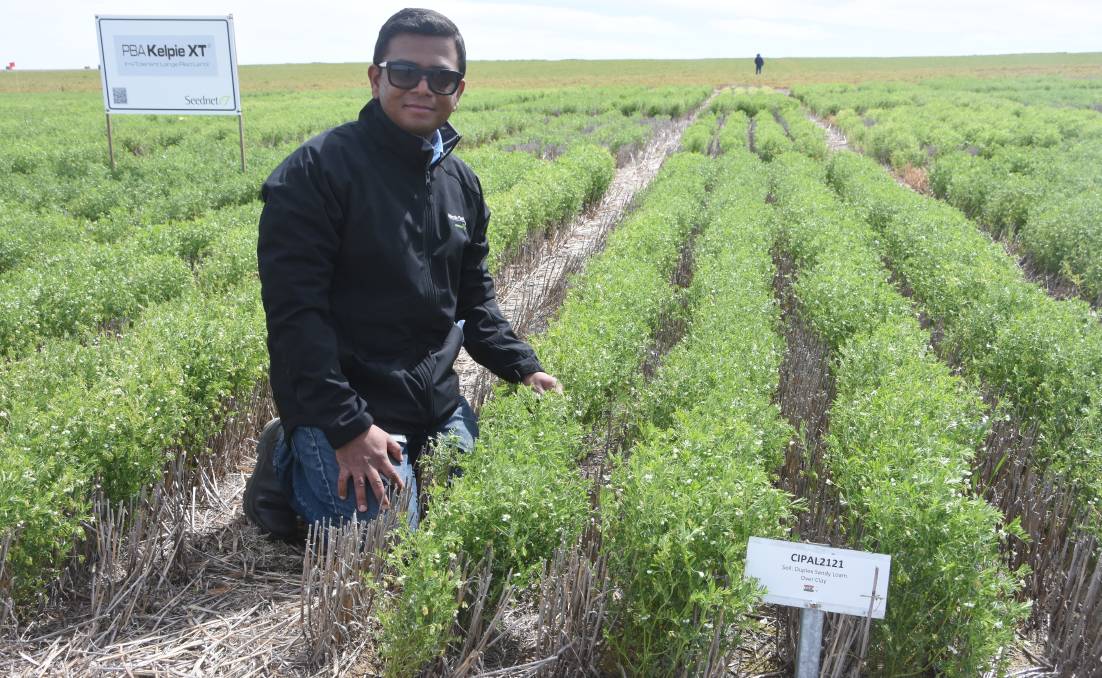 Agriculture Victoria lentil breeder Arun Shunmugam with a promising line of yet to be commercially released lentils in a trial at the pulse trial site at Propodollah, near Nhill, last week.

With grower interest in lentils at all time highs due to record prices breeders say a number of new lines in trials are showing promise.

IN A YEAR with many contenders for most lucrative crop lentils are making a solid charge.

It has farmers in the lentil belt through Victoria and South Australia excited about this year's harvest, with a kind season in regions such as the Wimmera meaning many crops are displaying outstanding yield potential.

Given the buzz around the crop at present it is no wonder lentils were one of the major talking points at last week's Southern Pulse Field Day near Nhill in Victoria's Wimmera.

Agriculture Victoria pulse breeders Jason Brand and Arun Shunmugam said there were a number of promising new developments in the lentil breeding pipeline.

In particular two cultivars yet to be commercialised are performing well in trials, with Dr Brand saying there was huge yield potential in the two lines.

The crowd at the Nhill field day said Clearfield / imi-tolerant lines such as Hallmark and Hurricane were popular as they gave flexibility within the rotation and reduced the plant-back risk when planted following another Clearfield line.

He said there was a complex interaction which meant plants just metres apart could fare vastly differently.

"You can see even in the trials here that some plants look like they've incurred frost damage and just a couple of metres away with slightly different soil type and slightly higher up they are unaffected.

"Some form of tolerance to both these stresses would be a great win for the industry," Dr Brand said.

He said the breeding sector wanted feedback from growers about what herbicide tolerance traits were wanted.

"It is a complex one as we have to manage market expectations and maximum residue limits in with what is going to work well agronomically, but we're really keen to hear what growers would be interested in seeing in future varieties," he said.