One of Australia's leading dairy cow classifiers has been awarded a Jersey Australia life membership. 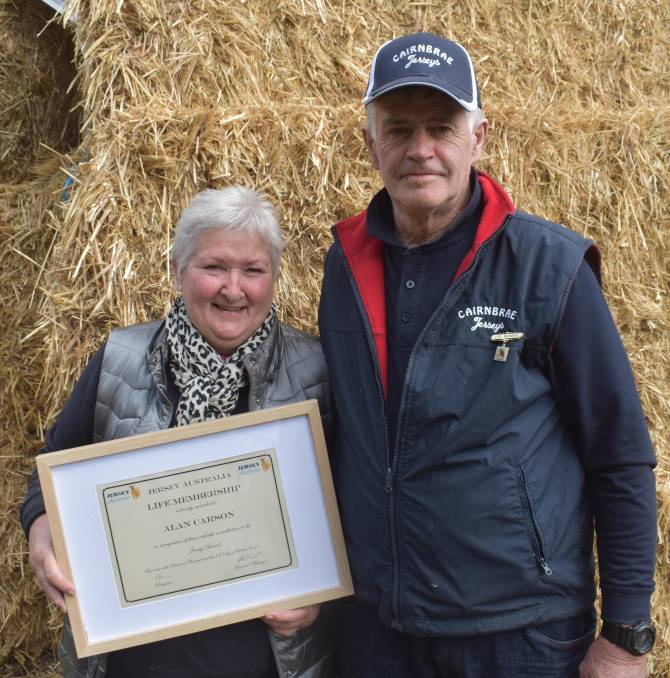 One of Australia's leading dairy cow classifiers has been awarded a Jersey Australia life membership as he retires from the industry.

Alan Carson has been a classifier since 1983 and has also served three terms on the Jersey Australia board.

Alan and his wife Janine have sold their Irrewillipe dairy farm and award-winning Cairnbrae Jerseys and will move to Torquay at the end of November.

The Jersey Australia life membership was presented at the start of their on-farm second stage dispersal sale on October 13.

He has also been a director on the Jersey Australia board since 2015.

The award was presented by former Jersey Australia president Chris MacKenzie who was the most recent life membership recipient.

Mr MacKenzie said Mr Carson was an astute and respected classifier and a forward-thinking board member.

He said the name Cairnbrae Jerseys, established in 1947, resonated around the world.

They have also been prominent breeders of bulls for artificial insemination, with 24 entering the system highlighted by Elton who sold more than 150,000 straws.

"The leadership Alan has shown in that way has been enormous.

"What happens in an organisation often comes down to a few people, and Alan's passion for cows and ensuring they are awarded justly through the classification system has always shone through.

"His success in recent years must seem like a dream come true with the achievements of their cows."

Mr Carson said the life membership was a "tremendous honour".

"I've had a great time classifying cows and enjoyed every bit of it," he said.

Mr Carson is continuing as a classifier at this stage, although he's uncertain for how long.

"I don't know how much longer I will do it. I've always been a firm believer that when you're not milking cows you shouldn't still be classifying but I'm still going at this stage."

Classifiers evaluate and compare cow body parts for their structure according to breed conformation scorecard and ideals.

"I have put a lot of time into it," Mr Carson said.

"I've travelled all around Australia for the classifications. I would have been on every Jersey farm in Australia several times, from Western Australia to Tasmania to the Atherton Tablelands."

He paid tribute to his wife Janine.

"I've spent many days classifying cows but I've had someone at home milking the cows for me; without Janine I couldn't have done it," he said.

The farm has been sold to a sheep farmer, ending a family dairy farming history dating back to 1897.

Mr Carson said he was proud of the cows, which included more high-profile lots in the second sale.

"We've had lots of good reports from our previous sale and will watch them with great interest at their new homes," he said.

"They don't happen in five minutes; it has taken us a lifetime to put them together."

Alan and Janine will raise 71 calves before moving to their new beef property at Torquay.

There will be a lot of sentiment as they see the cows loaded on trucks.

"On Monday morning when they're all gone it's really going to hit," Mr Carson said.

He leaves confident that the Jersey cow is the cow of the future due to its efficiency.

"The Jersey cow is definitely better today than when we started," he said.

Current Jersey Australia president Lisa Broad said Mr Carson's commitment in continually improving and evolving the classification system had been second to none.

"He's given it all over his time in classification but that's just one part of his commitment," she said.

"Alan has also been a valued board member and a major contributor to dairy farming and the Jersey breed."