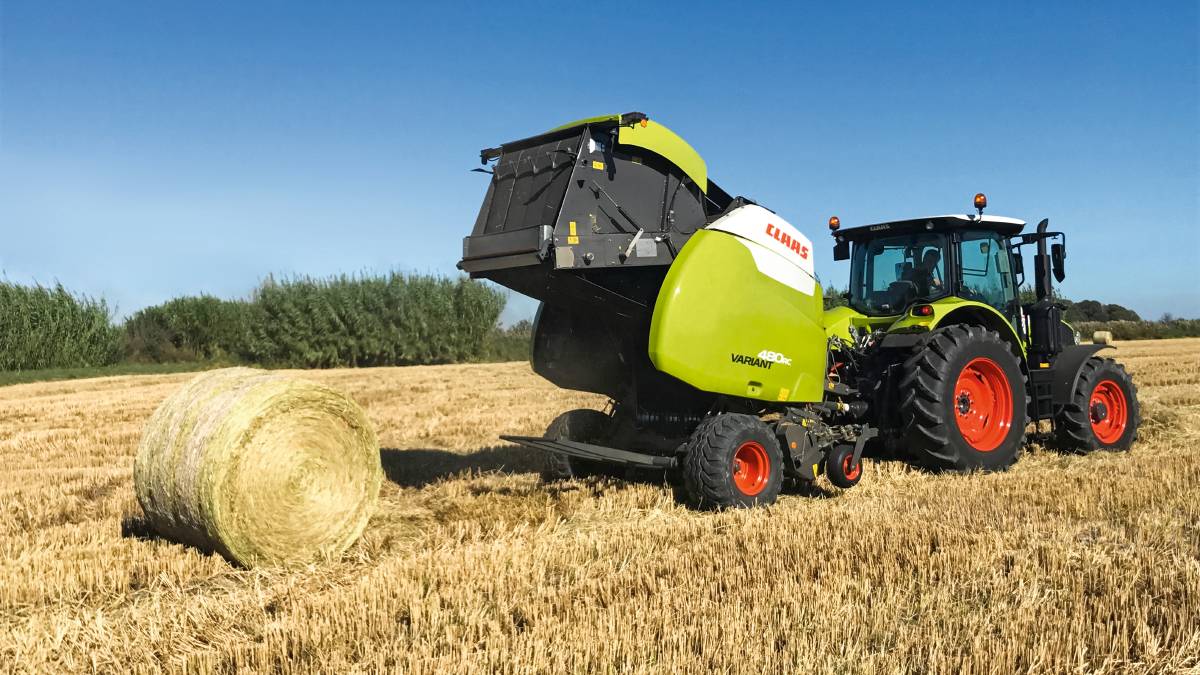 The two Variant models feature a rotor structure that turns through a full 360 degrees instead of the previous 180 degrees.

Farmers will find Claas' Variant 400 variable-chamber round balers are more powerful, reliable and easier to use when harvesting hay, silage and straw.

Farmers will find Claas' Variant 400 variable-chamber round balers are more powerful, reliable and easier to use when harvesting hay, silage and straw.

This is as a result of significant improvements to the balers' intake, crop flow, wrapping and maintenance systems.

The rotor, which comprises pairs of four pointed stars arranged in a helix, then feeds the crop into the chamber.

"The rotor rotates in the opposite direction to the four hydraulically-tensioned endless belts, which start rolling the bale automatically.

"The operator can control the density and the soft core from the terminal."

The pick-up has four rows of tines across its 2.1m operating width.

The two castor wheels can be adjusted without tools and can stay on the baler during transport.

The angle of the leading roller can be adjusted without tools to optimise crop flow, and short augers on either side direct the crop to the rotor.

"The dual roller crop press is suspended and can be mechanically switched between four different settings without the use of tools," Mr McAlwee said.

"It allows the intake to be quickly adjusted to suit different operating conditions and ensures a more uniform and faster crop flow, allowing higher operating speeds.

The optional Roto Cut cutterbar has 14 knives that can be easily removed for sharpening.

"In these models, the cutting floor automatically drops 30mm when there is a risk of blockage, meaning that the baler can always be driven at its optimal level of performance," Mr McAlwee said.

"The terminal issues an alarm to warn the operator to reduce forward speed and releases the pressure on the knives.

"Once the floor has slipped back into place, the knives are pressurised again."

The 400 series features edge-to-edge net wrapping as standard, as well as an overhauled netting or twine intake.

"A new plate assists with the insertion of netting or twine into the baling chamber, which means that you can be sure that the tying process will start properly under all conditions," Mr McAlwee said.

"Variant 400 models are specified with a wider 1.3m netting trough that lays the netting over the edges of the bale.

"Rounded edges are particularly useful if the bales are to be stored outside."

Other improvements include a reinforced front frame for low-wear belt guidance and the addition of a wide lubricating brush that coats all chains with oil, regardless of the bale count.

Claas has redesigned the pivot of the tailgate for rapid discharge.

"The tailgate can be opened and closed in six seconds, allowing bales to be discharged in a total time of nine seconds," Mr McAlwee said.

"Each sequence is accurately timed to minimise cycle time."

Variant can be controlled using the Communicator II terminal or other Isobus-compatible terminals.

The Variant features a simple and clean styling.