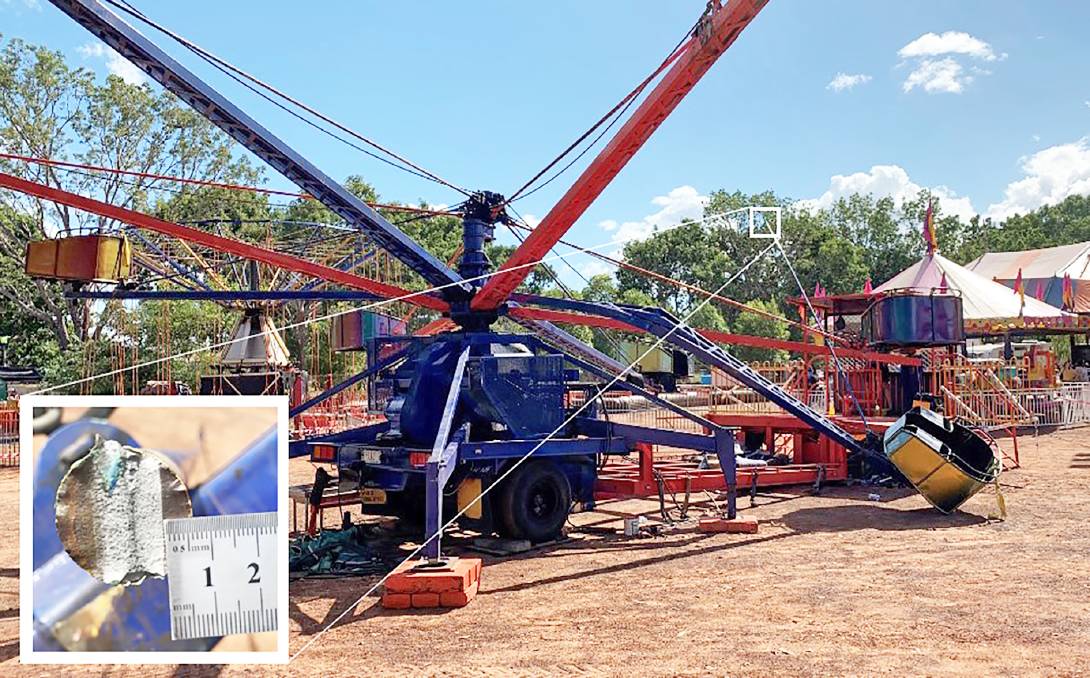 NEAR TRAGEDY: Corrosion is visible at the break point of the sweep support rod. Picture: NT Work Safe.

The dangers of poorly maintained amusement rides at country agricultural shows were laid bare this week.

The dangers of poorly maintained amusement rides at country agricultural shows were laid bare this week.

Two paying passengers aboard a faulty Octopus ride were injured after it crashed at a show near Darwin several years ago.

The incident has put all show organisers on alert.

The frightening NT incident had its court sequel this week.

A woman and her son were taken to hospital with minor injuries during the Freds Pass Show in 2019.

Eight other frightened children on the ride were left stranded, high in the air for almost half an hour after the machine collapsed.

Water was tossed up to the children while they waited to be rescued by emergency services.

This week the ride operator was convicted and fined $30,000 in the NT Local Court.

Tyrone Troy Taylor entered an early guilty plea to two Category 2 charges under Section 19 of the Work Health and Safety (National Uniform Legislation) Act 2011 (the Act), for exposing the two injured passengers to a risk of serious injury or death.

Mr Taylor also pleaded guilty to one Category 3 charge, also under Section 19, for putting at risk the health and safety of the other passengers on the ride, which included children, and nearby bystanders.

The man was fined $10,000, ordered to pay the two injured passengers $10,000 each and had to hand over the Octopus ride to authorities for destruction.

The NT WorkSafe investigation into the incident found Mr Taylor had neglected to regularly maintain and test his ride to ensure its ongoing safety.

The court was told the ride had never undergone a major inspection, even though Mr Taylor took ownership of the second hand ride in 2003.

Independent reports commissioned by NT WorkSafe found the sweep arms and tension rods of the ride had pre-existing cracks, corrosion and poor welds which compromised the structural integrity of the ride.

The NT's Work Health and Safety regulator Bill Esteves said the incident was a timely reminder to all Territory businesses who own and operate plant of their duties to make sure regular inspections, maintenance and repairs are carried out to keep their plant in a safe condition.

"It was well below the acceptable standard for the Octopus Ride to be used when it was unsafe, considering it was mainly operated at family friendly community events where the primary customers are children."