A new weather forecasting tool will help farmers assess the risk of any climate extremes at a local level over a number of time frames. 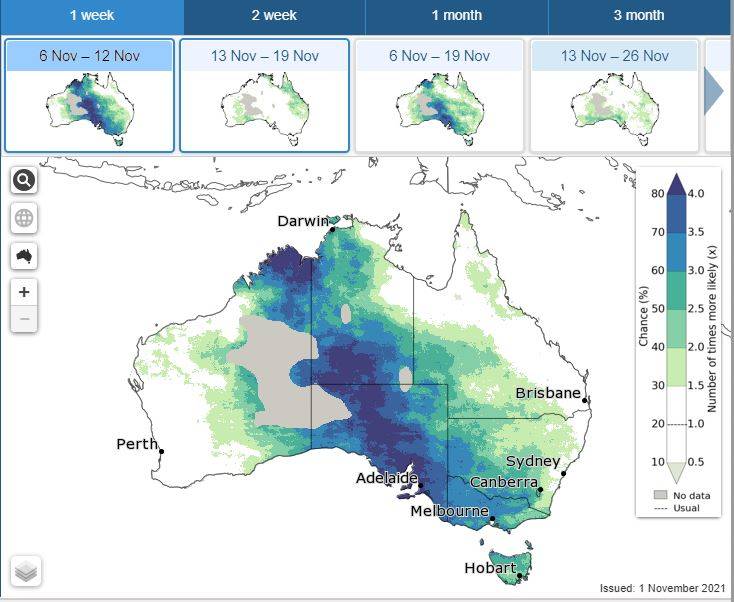 A sample of the new BOM extreme weather map, this time looking at the chance of heavy rainfall over the next week.

THE BUREAU of Meteorology has launched a new tool on its website that will help the agriculture sector plan for extreme weather.

The new extreme climate outlook maps can be found at http://www.bom.gov.au/climate/outlooks/#/rainfall/extremes/p80/weekly/0 and will allow farmers to assess a number of risks.

The map can be tailored to look at historical rainfall, maximum or minimum temperatures at a local level over a number of time periods.

It will have great applications for farmers undertaking weather depending operations such as hay-making or harvesting.

BOM senior climatologist Andrew Watkins said this was the first-time people have been able to drill down to their local area to see the chance of unseasonal and extreme temperature and rainfall.

"The user-friendly model shows the likelihood of unusually warm or cool temperatures and dry or wet conditions for the weeks, months, or even seasons ahead for specific, highly localised areas," he said.

Dr Watkins said improvements to the BOM's climate models had made the new page possible.

"The outlooks draw on the Bureau's upgraded climate model," he said.

"We have recognised the growing need for information about unseasonal and extreme climate events and answered with these new features now publicly and freely available on the Bureau's website."

Dr Watkins said the maps have been tried and tested with farmers across Australia, who have found them helpful for anticipating extremely warm, cool, dry or wet conditions.

"We've heard from farmers saying the outlook maps have helped them plan when to sow pastures, move stock and apply fertiliser, because they've been able to make that decision informed by the likelihood of rain," he said.

"We want to be there when it matters most, whether that's your short-term forecast, or climate extremes"

These new tools are part of the Forewarned is Forearmed project, a partnership of government, research and industry sectors funded through the Australian Government's Rural R&D For Profit Program.