The storm casts an eerie glow as it nears the town of St Arnaud. Photo: Jason Smith.

See the spectacular photos as a record-breaking storm hit the eastern Wimmera town of St Arnaud.

AN AMAZING storm cell has dumped two month's average rainfall over the eastern Wimmera town of St Arnaud in just a couple of hours.

The official Bureau of Meteorology (BOM) weather station at St Arnaud measured 87mm while unofficial readings were as high as 100mm.

The storm caused severe local flooding and forced residents to evacuate their houses.

Nearby Charlton was also hit by riverine flooding, with the Avoca River rising sharply.

"It seems like St Arnaud town has recorded the highest anywhere, it just bucketed down," Mr Douglas said.

While he said there had been significant damage to the town valuable crops nearing harvest had not been hard hit.

"Away from the town 20 kilometres to the west there was 65mm, and then another 20k west and it was 26mm and unlike last week it came down as rain rather than as hail and without too much wind so we're hopeful there won't be a lot of damage, some of the crops will still probably respond positively to the moisture," Mr Douglas said.

In St Arnaud town he said much of the flooding had been caused by an inadequate drainage system. 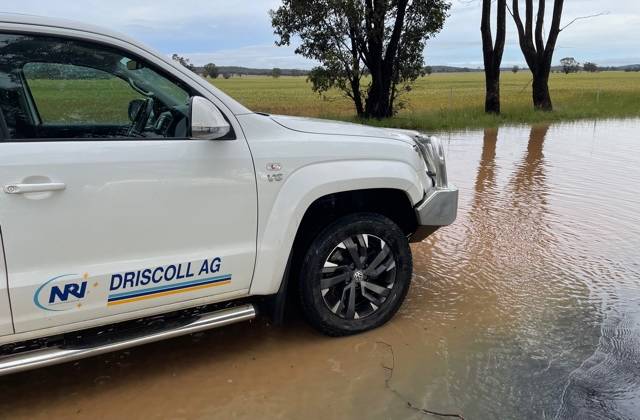 "The main town drain, which is an old brick construction, blocked up and that was responsible for much of the flooding on Napier St (the town's main street) and the areas around it," Mr Douglas said.

He said the undulating areas, in particular to the east of the town, had ephemeral creeks roaring and roads were cut, but added it was likely to subside quickly.

Another silver lining of the destructive rain was that it has set the region up for stock water over the summer.

"It's probably the best we've seen the catchments for the best part of a decade, the spring rain has seen things start to run into dams, so that will be a positive once we come into summer," Mr Douglas said.

The Bureau of Meteorology confirmed it was the highest 24 hour tally for St Arnaud in November in a lengthy 142 years of record keeping.