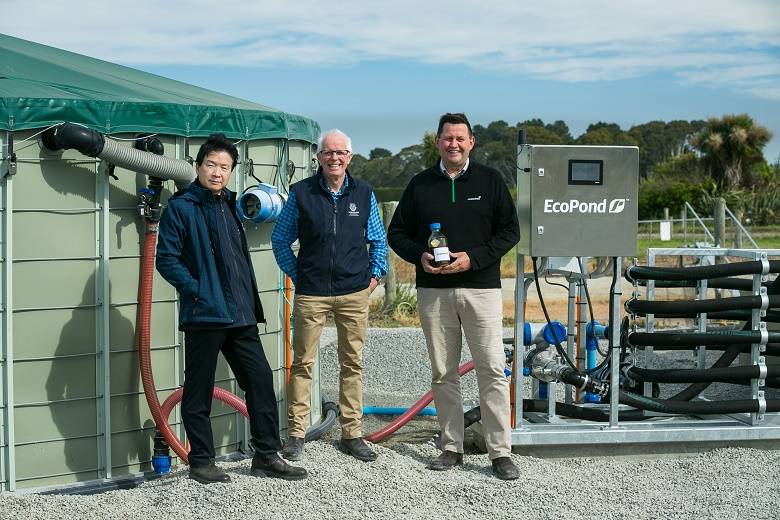 Developed in partnership with Ravensdown, the new technology is an effluent treatment system that reduces the methane emissions from farm dairy effluent ponds by up to 99 per cent.

Launched to market by Ravensdown and Lincoln University on November 10 under the brand name EcoPond, the new treatment system also slashes the amount of E.coli in the treated effluent, reduces ammonia emissions, mitigates odour and cuts phosphate leaching losses from effluent areas into waterways by up to 90pc.

Cutting greenhouse gas methane emissions has been a focal point of the recent COP26 climate summit in Glasgow, with New Zealand joining more than 100 countries pledging to reduce methane emissions by 30pc over the next decade.

The EcoPond system achieves its highly significant reductions in methane emissions by adding a treatment agent iron sulphate, a safe additive used in the treatment of drinking water, to effluent ponds.

Both Professors Keith Cameron and Hong Di hope that the greenhouse gas mitigation delivered by EcoPond will be a gamechanger for dairy farmers.

"Nearly all dairy farms use effluent ponds, which are the second-largest source of on-farm methane emissions, after cow belching," Professor Cameron said.

"Our development and demonstration of the new system, undertaken at the Lincoln University Research Dairy Farm, has proven that the new system is enormously effective at neutralising the methane-producing process, resulting in a 4 to 5pc reduction in an average dairy farm's overall methane emissions.

"This is hugely significant for the industry, as it provides farmers with a new tool in their toolbox to help reduce methane emissions on farm."

EcoPond can be easily retrofitted into a farmer's existing effluent system.

"As far as the farmer is concerned, it's 'plug and play'," Professor Cameron said.

"EcoPond is doing the business while the farmer is busy milking the cows."

"In testing the ClearTech system for unintended consequences we found that the gases we collected off the effluent in experimental set-ups indicated a reduction in methane emissions of greater than 90pc" Professor Hong Di said..

"This was a stunning result. In science, it's rare to achieve such a large influence on an experiment.

"So, encouraged by this finding, we tested the system using farm-sized effluent storage tanks and nervously waited to see what would happen.

"The result exceeded our wildest hopes, achieving a methane emission reduction of 99.9pc.

Lincoln University Acting Vice-Chancellor, Professor Bruce McKenzie, said the development of two such significant and innovative agritech solutions that can be quickly and easily applied on-farm demonstrated the value of collaborative partnerships as a means to addressing some of the world's most pressing land-based challenges.

"Lincoln University has a long history of driving innovation in the land-based sector and has a distinctive research profile," Professor McKenzie said.

"Our reason for being is to discover answers to the most pressing land-based challenges, and we do this by collaborating with industry partners, universities, research centres and iwi to help shape a better, more sustainable world.

"Through our partnership with Ravensdown, two of our most acclaimed researchers have been able to develop pivotal on-farm effluent treatment systems that will have immediate and far-reaching benefits by enabling the dairy farming sector to mitigate one of the key greenhouse gases, methane, while also gaining water quality benefits at the same time."