Fertiliser prices are likely to continue to rise into autumn next year, with P products tipped to top a whopping $1500/t delivered port. 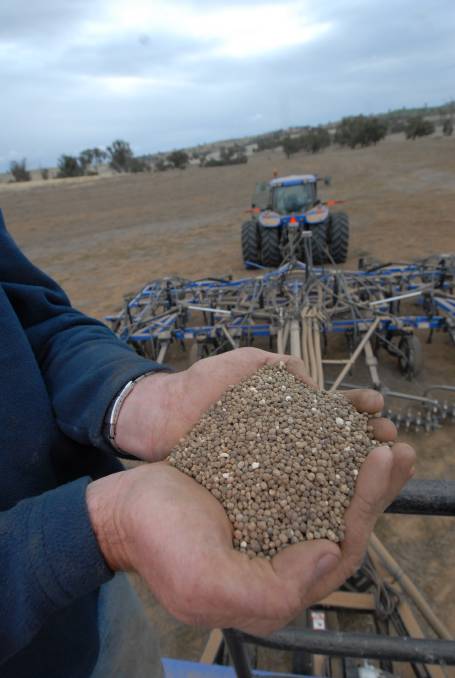 SOARING: Prices for both phosphorus and nitrogen-based fertilisers have sky-rocketed in 2021 due to high demand and rising input costs.

AUSTRALIAN farmers may be confronted with wholesale phosphorus fertiliser prices in excess of $A1500 a tonne for delivery at port in autumn next year when the nation's fertilser demand peaks in line with the planting of the winter crop.

Currently port prices sit at around $1480/t for P based products, with farmers paying upcountry freight costs and GST on top of that.

The Chinese ban on the export of phosphate means Australia, heavily reliant on phosphate imports, must look elsewhere.

Andrew Whitelaw, Thomas Elder Markets commodity analyst, said the major origin was set to be Morocco, one of the world's largest players on the phosphate scene.

However, Morocco, in north-west Africa, is much further to bring product in, meaning much higher freight costs and longer lag times between product being purchased and it landing in Australia.

Mr Whitelaw the current market dynamics of high demand, high gas prices and high freight costs, creating a perfect storm for the sky-rocketing of fertiliser prices seen in the past six months, were unlikely to change prior to the bulk of Australia's phosphorus fertiliser being ordered.

"The grain prices that are a key driver of the demand will not change substantially by the time Australian farmers need to have their orders in as the northern hemisphere spring plantings will have not taken place so grain markets should be relatively similar," he said.

"You never say never but if you're doing your budgeting then it would probably pay to factor in the higher prices."

In a small consolation Mr Whitelaw said while prices may be at near record levels he did not think supply would pose a problem.

"Although the importers cannot bring it in from China there is the supply globally so farmers should still be able to source product, it is just likely they will have to pay a fairly high price in historic terms for it."

Mark Allison, managing director, a major player in Australia's fertiliser industry, said his organisation was comfortable with the fertiliser situation in Western Australia and would continue to work with its multiple sources on the east coast.

He said the company would be working to ensure it had access to the product as a priority, then would work through the pricing issues.

"We'll get the volume commitments and we'll work out the pricing from there."

He said he expected demand to vary across the different farm sectors.

"With the pasture guys they often spend to a set dollar amount, so their total tonnes bought will be influenced by that, whereas the croppers have more set needs in terms of supply," he said.

"Farmers are generally going to be more worried about having access to the product when they need it than the price, although they obviously won't like seeing it continue to rise in value."

Mr Whitelaw said Australian farmers had a lot to weigh up when making their fertiliser decisions for next year, with unknowns around the seasonal conditions and grain price for the 2022-23 crop making decision making difficult.

"First and foremost they are likely to ensure they have supply when they need it, especially with phosphorus fertiliser which you need before sowing."

"There is some talk of cutting rates, but even based on these high international fertiliser prices it would be a very solid return on investment if you knew you'd have this year's rainfall and this year's grain prices."

"In 2009 we had a similar situation early in the year when people ordered fertiliser, grain prices had been high and fertiliser prices had followed suit.

"The issue was that after a big northern hemisphere crop grain prices fell 30 per cent during the Australian growing season, which made a big difference on the return on investment on fertiliser purchases."

He said it was difficult to predict grain prices once the 2022 northern hemisphere crop came on line.

"Prices are historically high so there is more room to go down than up, but supply is still tight so if there are any production disruptions you could still see it head up, that, combined with predicting the likelihood of rainfall makes it hard for growers making some big decisions regarding inputs."