For a second summer Fall Army Worm is making its presence known and growers are gearing up for the fight of their lives. 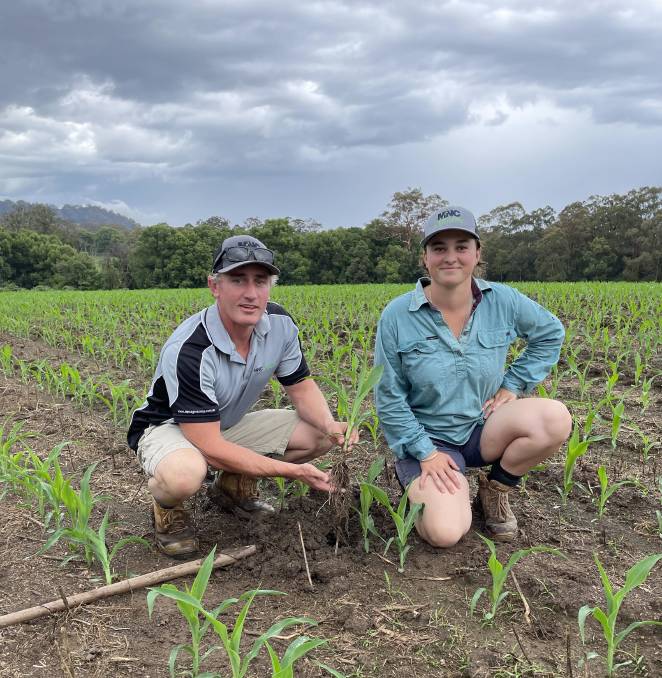 Corn growers in the state's north are bracing for a second summer with Fall Army Worm, after confirmed sightings in three-week old plants at Bonville south of Coffs Harbour last week.

The new presence comes on top of Local Land Services reports of the invasive grub at Croppa Creek and Cudgen.

At Nowra, FAW has yet to be confirmed, but agronomist Matt Thompson says that it is likely, given the nature of damage in young corn.

Last week FAW was confirmed in their crop of young corn and now it is "game on".

"This will be a work in progress," said Jason Bake, whose Daughter Hannah helps monitor grub levels and numbers of beneficial insects at the earliest stage.

In addition, pheromone traps for FAW moths are monitored by LLS biosecurity staff.

With residential neighbours surrounding his paddocks, Mr Bake will opt for soft chemistry, like Fawligen - a biological spray recently approved for use in Australia - and will apply that this week as the ground dries out after recent train.

The next phase of the operation will be releasing Trichogramma wasps into the corn when waist high, so that the beneficial insect has good plant cover to hide.

At that stage, however, FAW will be deep in the corn whorl and much harder to control.

In Queensland's Fassifern Valley, west of Brisbane, the pest has continued to breed all winter and sweet corn producers like Angus Stainlay, formerly of Murwillumbah, are trying to work smarter, not harder. 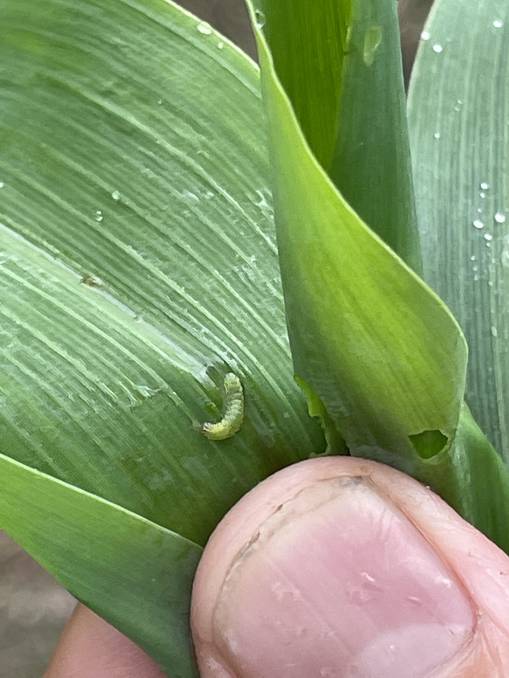 Young grub deep in whorls of corn can be hard to see.

"They are an aggressive pest; aggressive breeders. Heliothis lays one egg whereas these guys lay 50.

"It is unbelievable to see so many live grubs at once and they will eat through the side of a cob to get where they want.

"This is a whole new beast. Heliothis by comparison is a walk in the park."

Mr Stainlay said timing of spray was critical, as was the monitoring of grub counts.

"Some of these sprays you can only use three times in a season so it is easy to run out of options when you're going weekly," he said.

"You have to be really careful."

High water rates when spraying - 800 to 1000 litres per hectare - makes for slow coverage but allows the chemistry to penetrate deep into the plant.

Mr Stainlay said effective chemistry must be taken up by the leaf - a translaminer effect - and those sprays were expensive.

"Any good chemistry is expensive," he said. "If you go cheap you might as well put Milo in the tank." Fall Army Worm making a meal of corn that would have been cut for silage. The newly arrived pest is presenting a real challenge for farmers.

It is early days for Australian farmers in the fight against Fall Army Worm, this being only the second summer with the invasive grub on our shores, but already there are some talking about the need to grow genetically modified corn if production is to be maintained without a hit to the environment through chemical spray.

Dairy producer Paul Weir, Tuncester via Lismore, lost his entire corn silage crop last year to the grub, after making the mistake of going in "soft" when FAW made its presence first known.

As an alternative this summer, Mr Weir is growing white grain sorghum, hoping it will be less attractive to the moth that lays many more eggs than its heliothis counterpart.

"Sorghum comes a poor second to corn," he says. "It has exposed grain. It must be ensiled for longer to make the starch more digestible.

"I think it is time we at least had a conversation about BT Maize," he said, referring to genetically modified corn that produces toxins derived from the common soil bacterium Bacillus thuringiensis.

Like BT Cotton, the hope is that BT Maize can outsmart pests and growers can continue to supply a crop rich in starch and ideally suited to intensive dairy production.

"After we lost our corn crop last year we spent more on buying-in hay than we did in the drought," he said, pointing out his farm has access to secure water.

"And as a result our milk production dropped by 1000 litres a day.

"That's how important corn is as a dairy ingredient. We just can't afford to take this feed off our cows."

Mr Weir said the rising costs of fuel, fertiliser and feed were having an impact on all dairy farmers' bottom line.

"No farmer is going to tolerate a price drop at the farm gate," he said.

"We need a mechanism to pass on these costs.

"With cull cow prices so high farmers will take the option of going out of the industry and we can't afford to lose any more production.

"The big question is who will actually supply our milk in ten years time?"

The story Game-on for corn producers first appeared on The Land.