Global crop protection business FMC has a pipeline full of new products in development and it says Australia is central to its strategy. 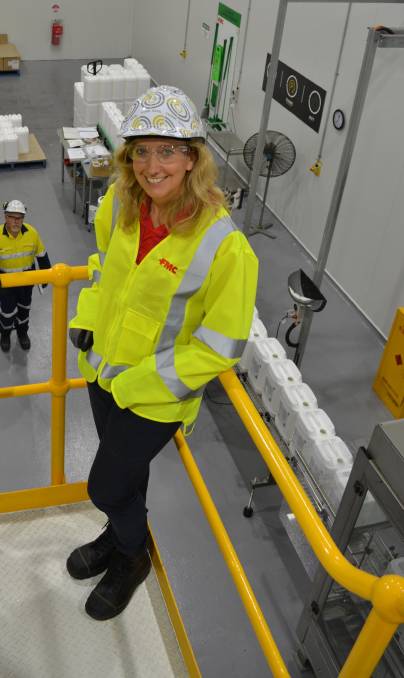 IT MAY be a small market in terms of overall volumes but crop protection business FMC says Australia is a critical part of its overall global strategy.

FMC Australia managing director Kristina Hermanson said FMC had a strong offering of products in the pipeline and that Australia would play a critical role in the commercialisation process.

"We've got long-term plans to launch new active ingredients and bring new innovation into the market and Australia is central to those plans," Ms Hermanson said.

"Australia has a strong regulatory system and path to market for the crop protection sector, along with innovative growers looking for new solutions so it plays a critical role in FMC's global strategy."

FMC chief technology officer Kathy Shelton said the path to market globally was a laborious one.

"We are screening around 60,000 molecules and compounds per year to find 20 that warrant further research," Dr Shelton said.

"From that initial screening to a decision point of deciding whether we have a molecule that can be a commercial product takes four or five years and we are making thousands of versions of the initial molecule so you can see it is a time-consuming process, and that is before we go down the path of getting regulatory approval," she said.

"It can take eight to 11 years of effort to bring a new product to market."

She said costs were also high, saying it could take a spend of up to $A343 million to register the molecule across the world.

Locally, Ms Hermanson said she was pleased with the initial season of FMC's high profile Overwatch herbicide, in spite of early-season controversy surrounding its alleged role in bleaching of crops.

"I am very happy with the launch, the vast majority of growers have had a fabulous experience with Overwatch," she said.

"We have seen very strong weed control with the product."

In relation to the problems with bleaching she said the unusual start to the season had played a role.

"It started out dry, then we had a very late planting and it was cold and wet with really low solar radiation and these conditions did challenge but I think we saw as the year went on that these issues did not prove overwhelming.

"We're comfortable that the product has been through rigourous APVMA (Australian Pesticides and Veterinary Medicines Authority) processes prior to getting registration and that it is safe to use on all the crops it is registered for," she said.

Into the future, Dr Shelton said the FMC development pipeline had several key areas of focus

"We're looking at synthetic products but also the biologicals space which we think has a lot of promise," she said.

"The key, as it is with all of our research, is the molecule going to do something better than anything that is already on the market, both in terms of effectiveness and sustainability."

"In the US the big issue is glyphosate resistance in row crops, with weeds like giant amaranth a massive problem, especially with its ability to produce vast amounts of seed on each plant," she said.

"We're working on products that will help control amaranth which we think will be well taken up by growers."

"In Europe fungicide management is very challenging, while across the globe we're looking at insecticides that can minimise numbers of problem species without harming the insects we know are beneficial to crops."

"They have to be so specific to control the pest, and protect the pollinators."

In terms of product life span, Dr Shelton said there was no reason not to aspire to release chemistry that would be effective for decades.

"You see products like (fungicide) Mancozeb, it is still doing a great job on certain diseases and it has been in use for a long time now," she said.

Ms Hermanson said an informed farm sector dedicated to a sound herbicide rotation could prolong the longevity of active chemistry.

"Here in Australia there are some great organisations and initiatives such as the Australian Herbicide Resistance Initiative and WeedSmart and they are raising awareness of the importance of reducing the risk of herbicide resistance which is great for all of agriculture," she said.

Looking into the future both women said they saw sustainability as a critical issue.

"It is one of the things I talk about most with customers, every molecule we work on, sustainability is critical," Dr Shelton said.

"This is something the market wants, they want sustainably advantaged products," Dr Hermanson said.

"People want to know the new products are an improvement on what is already on the market, there is a higher expectation in regards to these matters and I think with the improvements in data we can now quantify it better, so we see it as a huge opportunity for the business," she said.