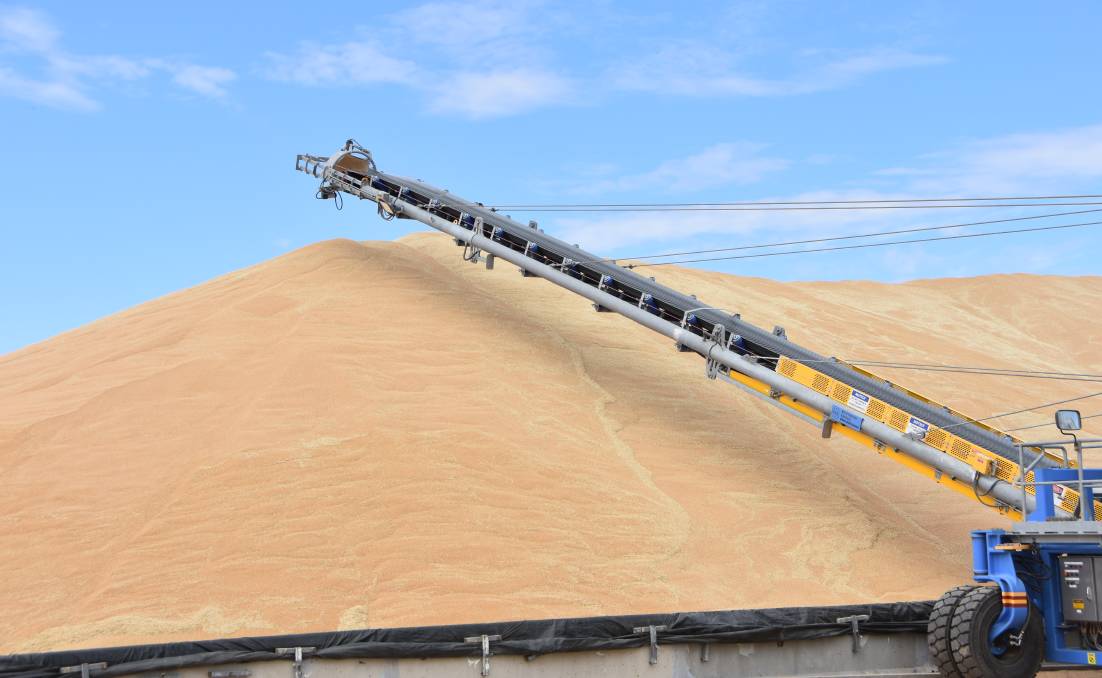 A MATTER OF STACK: Farmers are trying desperately to put together parcels of milling grade wheat due to the high premiums for human consumption grade product.

The price of milling wheat has fired up to near record levels in the past week as exporters scramble for supply after the NSW floods.

THE SPREADS between milling and feed wheat are opening up to near record levels as the grain trade tries desperately to get hold of quality wheat to export in light of the massive crop downgrades in NSW.

The good news for growers with downgraded grain is that the feed wheat price is remaining solid and the milling grades are rising off that level rather than the spread emerging due to a fall in the feed value.

It is not just the prices of high protein grades of milling wheat, where a premium has existed for some time, that are soaring, APW, the nation's standard wheat, has risen markedly over the past fortnight to sit at $120 a tonne over general purpose wheat and $140/t over feed wheat in most east coast port zones.

RELATED: Wet summer on the way

APW port prices are currently in excess of $420/t on the east coast and around $435/t in SA and WA, which is close to record territory.

Central to the widening spreads is a growing expectation that there will be severe crop quality damage in NSW.

Market Check head of strategy Nick Crundall said while headers had yet to resume in NSW there was a strong belief there would be significant damage.

"There has been too heavier a rain over a long period to not be expecting some fairly serious damage," Mr Crundall said.

On the positive side he said most farmers he had spoken to said they were likely to harvest the crop, allaying fears of potential widespread abandonement.

"It's hard to take when there are such good prices for quality wheat, but feed wheat is also very strong historically, prices around $250/t, combined with the strong year mean it will not be a bad year although obviously not as good as it could have been," he said.

He said the general consensus was that most wheat west of the Newell was likely to be impacted if it was not harvested prior to the rain.

Later areas to the east of the Newell have more of a chance of not suffering as severe quality damage.

"Areas in the Riverina, we're not sure what will happen there," he said.

"It will obviously depend on how the weather systems towards the end of this week go, if there is further heavy rain it won't be great but if they can escape with minimal falls the quality might not be too bad, high protein is obviously off the table but we can see the value of APW and even ASW wheat."

Brett Hosking, Grain Growers chairman, said there were a couple of silver linings out of the rain.

"By and large it does not look great, and there is a feeling that it will be every bit as bad as we thought a week ago, if not worse in terms of downgrading," Mr Hosking said.

"However, there is still a very strong market for feed wheat, only isolated paddocks look like being totally abandoned and many farmers had some grain in the bin before the rain hit," he said.

Mr Hosking said many growers with sound wheat would look to blend with downgraded grain.

"This is something that could help people get the best return for their efforts, which we wholly support, but we also caution them to be conservative and not push the boundaries in terms of specifications too hard, the last thing you want to do is end up with more downgraded product as you've overshot the standards," he said.

Both Mr Hosking and Mr Crundall said the primary obstacle to overcome in terms of quality was the falling numbers test, closely followed by test weight.

Internationally, Mr Crundall said buyers were keen to get hold of any type of milling wheat, meaning the market may not have peaked.

"Even though we've got these very high prices, based on the fundamentals there is still potential upside, although obviously when you have decile 9 or 10 prices there is also downside risk," he said.

"At current levels our milling wheat is very cheap on the world stage, but what happens from here will depend a lot on how the harvest goes from here.

"We may see more sound wheat come off in SA and Victoria if there are no weather issues there which could lead to some harvest pressure on the prices, but longer term a lot will be influenced by northern hemisphere 2022 crop prospects."

On the feed side he said there was good reason to suggest the current price will be maintained.

"Buyers in places like south-east Asia are looking at Australian wheat, especially with high corn prices," he said.