McColl's is showcasing its expansion into south-west Victoria this week. 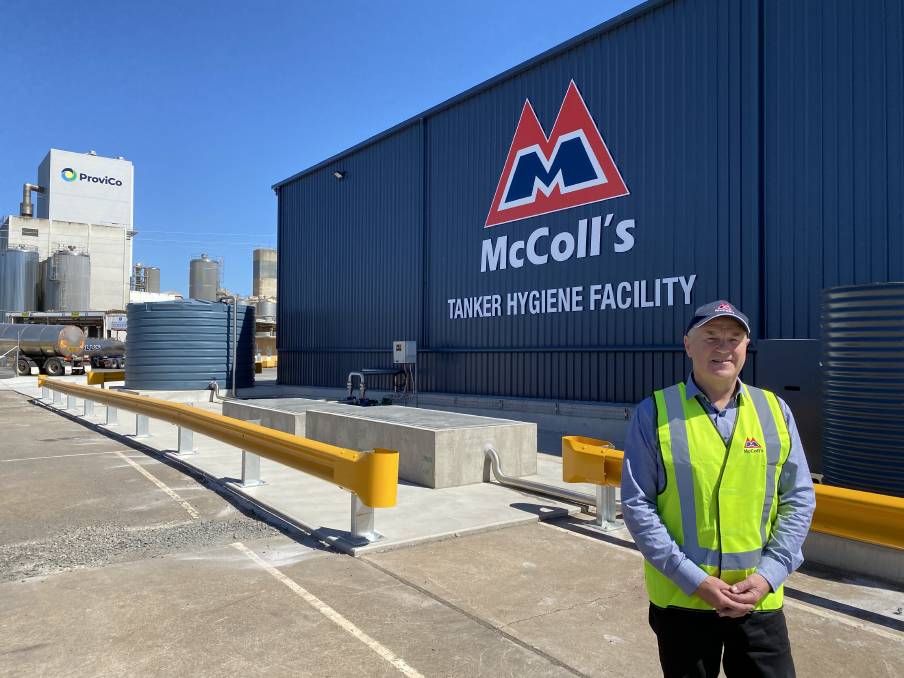 Expansion: McColl's Transport's Andrew Thompson says the company is expanding its operations in Dennington and has set up a permanent home with some of the best new facilities in the country.

McColl's Transport will expand its workforce as it this week unveils a new $2.5 facility in Dennington, Vic, which has been described as "the best in the Southern Hemisphere".

The company has grown to about 50 employees since it set up in south-west Victoria a year ago, and will on Wednesday showcase its state-of-the-art tanker washdown facility and a $15 million expansion of its fleet.

The company expanded into the Warrnambool region mid-last year when it took up a contract with ProviCo after it took over the site from Fonterra.

Project manager Tony Noske said the tanker hygiene facility was "unusual" in that it had the ability to wash a greater variety of food-grade products.

"It is absolutely the best in the country," Mr Noske said.

"It's fully automated. It's very sophisticated in that it heats the tankers up slowly and cools them down slowly and that stops them from cracking."

Mr Noske said McColl's now had 40 to 50 employees based out of the Dennington site.

"McColl's had nobody here before," he said.

"Its generated jobs for that many people from Warrnambool whereas previously the trucks might have been washed in Geelong or somewhere else."

OTHER NEWS: Finding opportunities in net-zero for dairy

Now there were 34 trucks through the site across three shifts.

And McColl's Transport group business development manager Andrew Thompson said the company was looking to recruit even more employees - both drivers and on site staff.

"There's heavy investment not only in infrastructure, but also in our fleet," Mr Thompson said.

"In the last three years there's been about $15 million spent on fleet upgrades and investment in new equipment."

Mr Thompson said the new washdown facility was capable of catering for double the number of trucks in half the time while saving on water.

"This is a state-of-the-art wash," Mr Thompson said.

All local contractors were used during the construction. Mr Thompson said by redeveloping the unused land next to the ProviCo site, it gives McColl's a permanent presence in Dennington.

"We don't only do milk transport, we do all bulk liquids including dangerous goods," Mr Thompson said.

"There is more investment to come in the region. It's about McColl's supporting the dairy industry and local region."

The story McColl's truck facility 'best in country' first appeared on The Standard.