Viterra has hit another milestone this harvest. 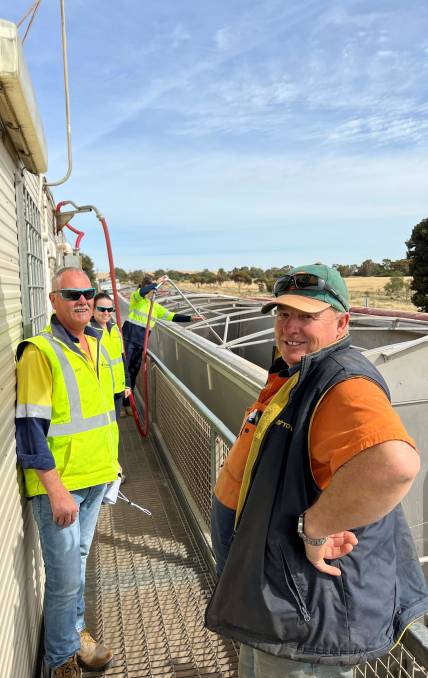 VITERRA has hit another milestone this harvest, with Yorke Peninsula growers delivering a record number of lentils.

The 16,400 tonnes of lentils delivered to Viterra's Ardrossan site on Wednesday, November 17 - equating to more than $16 million in value - is the most received in a day in the history of Viterra and the state.

"It is an outstanding milestone achieved by growers and is great news for them with grain being a key commodity in our state's economy," Viterra chief operations officer James Murray said.

"We're pleased to support growers by helping get their grain into storage as quickly as possible, and then connecting them with local and international markets," he said.

"It's also a huge credit to our employees who are a critical part of our business. It demonstrates their hard work and preparation to make sure our sites are running efficiently, in addition to our new digital delivery advice we've introduced to speed up the delivery process."

Urania cropper Ashley Wakefield delivered 42t of lentils into Ardrossan on that remarkable day, making the top grade for quality.

Our wheat yields are looking to be average to a bit above average. - ASHLEY WAKEFIELD

Mr Wakefield, who farms with wife Louise, son John and his wife Amy, said they were about halfway through harvest, after starting on November 18, with lentils and canola now finished and wheat under way.

"We were lucky to miss the hail and the bulk of the rain, we only had about 15 millimetres for November," he said.

"We have been very pleased with what we have reapt so far, while our wheat yields are looking to be average to a bit above average.

"Protein levels will be down though because of the dry spring, so it will probably go ASW instead of APW.

"Grain prices are offsetting some of the downgrade, but we are also looking down the barrel of a high fertiliser bill next season."

Across Viterra's sites, growers have been delivering barley, wheat, lentils and peas, with canola and faba beans starting to come through.

The company says it is well prepared for the increase in deliveries with better weather forecast.

"Our sites are ready to go. We work with growers year around and we will continue to do that during harvest with a continued focus of providing a valuable service during one of their busiest times of year," Mr Murray said.

Crop downgrades set to be the worst since 2010

The 60,000t cargo of SA barley kicks off a schedule of 4.5 million tonnes of forward shipping bookings for 13 exporters in the Viterra system.

Another 64,000t of barley is due to be loaded at Viterra's Port Lincoln terminal this week.

Mr Murray said there were 40 buyers in the Viterra network ready to purchase new season grain from growers to supply to domestic and international markets.

"This is a great outcome for local growers delivering to Viterra," he said.

"It reflects the strong demand for SA and western Vic grain delivered to the Viterra network and represents greater options for growers when they choose to sell their grain."

It follows a strong outturn program of more than 5.7mt of grain that headed to 30 countries last season from Viterra's export terminals.