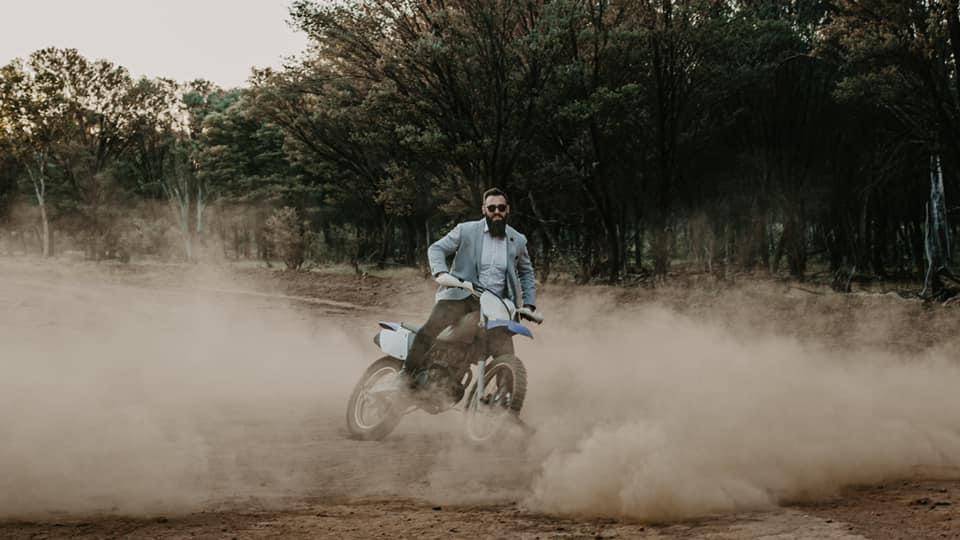 A Charleville boy who now calls Brisbane home, Sam Capewell made the unusual switch from being a chippy to a wedding celebrant, and he wouldn't have it any other way. Photo: Lindy Hick Photography

One celebrant's "battle against boring, long-winded and run-of-the-mill wedding ceremonies".

You won't find many chippies who will freely admit to loving love; in fact, finding one who will is probably as hard as finding 'the elusive one'.

But in the case of Sam Capewell, a Charleville boy who now calls Brisbane home, celebrating love in all its forms is his bread and butter.

So much so, that in late 2018 he downed tools for good and turned his side gig as I am Celebrant Sam into a full-time venture.

Since then, he's been "fighting a one-man battle against boring, long-winded and run-of-the-mill wedding ceremonies".

"The ceremony, the part where you really make it official, isn't something to be endured while you wait for the 'real' party to get going," Sam said.

"And just because the tradition of marriage is as old as they come, that doesn't mean the way we do it has to be.

"I'm all about creating personal and meaningful wedding ceremonies that not only get the couple, their vibe and their one-of-a-kind love story, but also gets them just as many compliments as their venue, dress, suit and open bar." 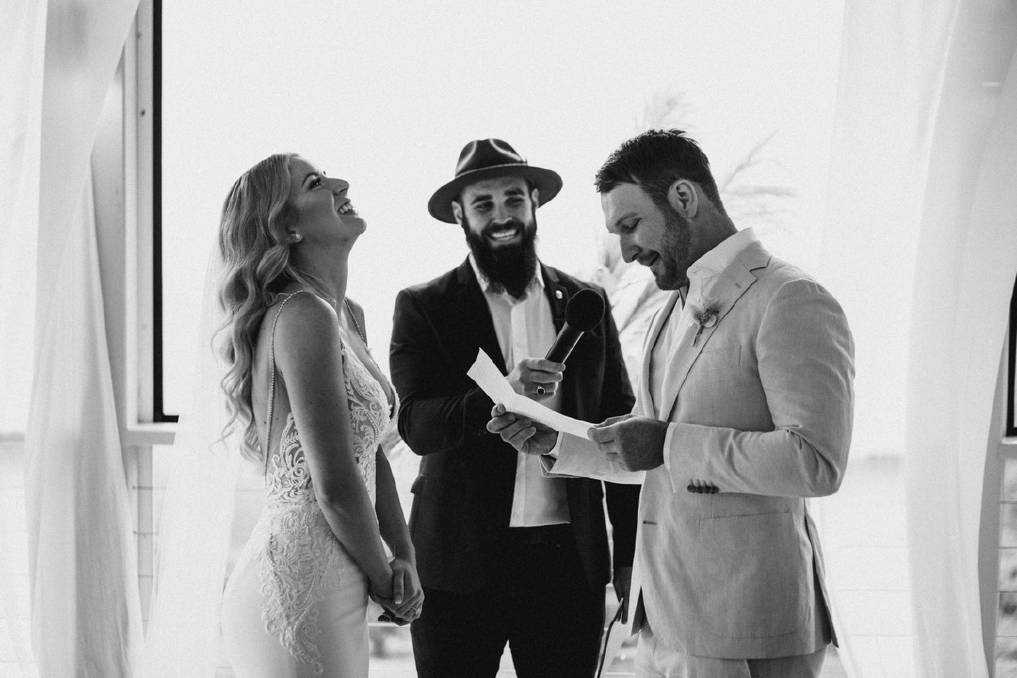 Sam celebrates love in all forms, and has conducted almost 350 weddings in the 4.5 years since he became registered as a civil celebrant. Photo: Luke Middlemiss Photography

As most good ideas go, it was his better half, wife Kady, who gave him the push to become a registered civil celebrant.

"My wife is four years older than me so I'd been to a lot of her friends' weddings... where you don't really know anyone and then you sit through the 45-minute ceremony and it's boring as all get out," Sam said.

"You're sitting there uncomfortable in a suit, you're sweating, you can't hear them because usually it's an older lady or an older gentleman and they talk a little bit too quiet, and they talk about love and what marriage is but it's a lot of their opinion and their views on it all."

Despite the many weddings that filled their social calendar, Sam said none of the ceremonies had resonated with him and his views of what marriage is.

"When it came time for my wife and I to get hitched, we actually eloped to Vegas just because we'd never seen anything that resonated with us enough to want to do it all," he said.

"Then a couple years later, a lot of my friends started to get engaged and start planning weddings and I was sort of whinging to my wife, 'oh, here we go again, we're going to have to sit through this stuff again', and she basically said 'shut up and do something about it'." 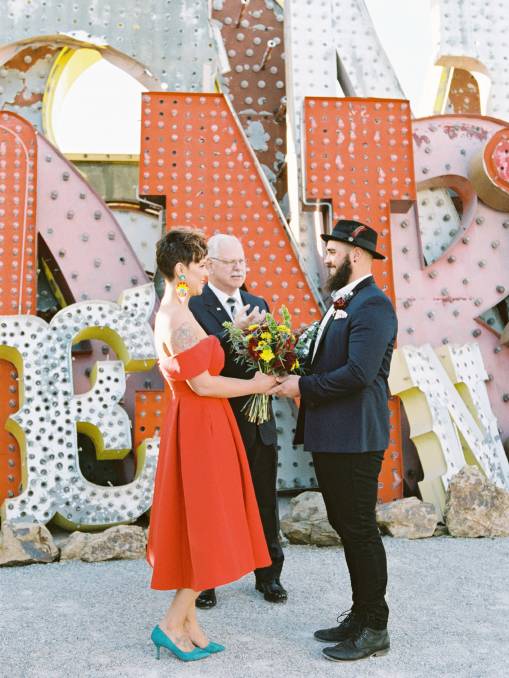 Kady and Sam Capewell eloped at The Neon Museum in Las Vegas, with just Pastor Pete as their audience. Photo: Gaby J Photography

And so he 'took the plunge' in mid 2017 and became registered, "just with the idea to have it as a bit of a laugh if anything, because who would expect a chippy to be a marriage celebrant".

The plan was just to offer his service to family and friends, but in the 4.5 years since Sam began facilitating the famed "I dos", he's conducted almost 350 wedding ceremonies.

"I'm one of four boys so it was going to be an opportunity to do my brothers' weddings and that type of thing, a lot of my friends were engaged at the time so I got to do a lot of those weddings and that's all it was to begin with," Sam said.

"Once I started doing a few weddings, the word spread and friends of friends started hitting me up to do their weddings, because they liked the fact that there was something different out there.

"Eventually I made a Facebook page and it snowballed from there into a few more weddings, and then I decided to go a little bit heavier into it and did a website and started advertising; within 18 months of starting, I was able to go full time with it."

Offering 'something a little different, a little outside of the traditional white, lace-trimmed box' isn't the only talent Sam brings to a wedding day - he's also been known to act as a photographer's assistant and jump on a motorbike to kick up some dust for the shot. 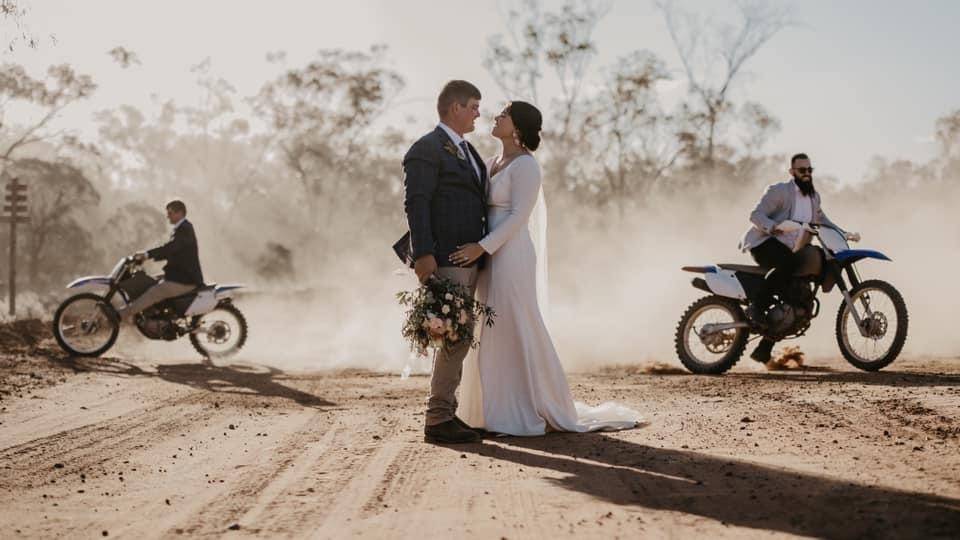 Sam (right) has been known to help set the scene for the wedding photographer. Photo: Lindy Hick Photography

"The first time I did it was for my brother's wedding. We were on our family property at Charleville and the photographer, Edwina Robertson, needed someone to get some horses in around my brother and his wife for photos.

"I sort of can't help myself when I'm on a motorbike, I go a little bit silly and started having some fun, so Edwina said 'let's start making some dust for them then' and we got some cool footage out of that one. And I've done it a couple other times for friends out on properties."

His days as Celebrant Sam are a far cry from the construction site, and he wouldn't have it any other way.

"It was never really my calling, I suppose you would say, to be a chippy; it was just something I fell into," Sam said.

"I was off the tools and in the management side of construction as well, so to go from a construction site where you're the bad-news bearer all day and everyone is in a bad mood, to a wedding and everyone is so stoked to be there and ready to have a good time, and to be the person that is able to provide them with a ceremony that they didn't really expect.

"And who doesn't love love?"