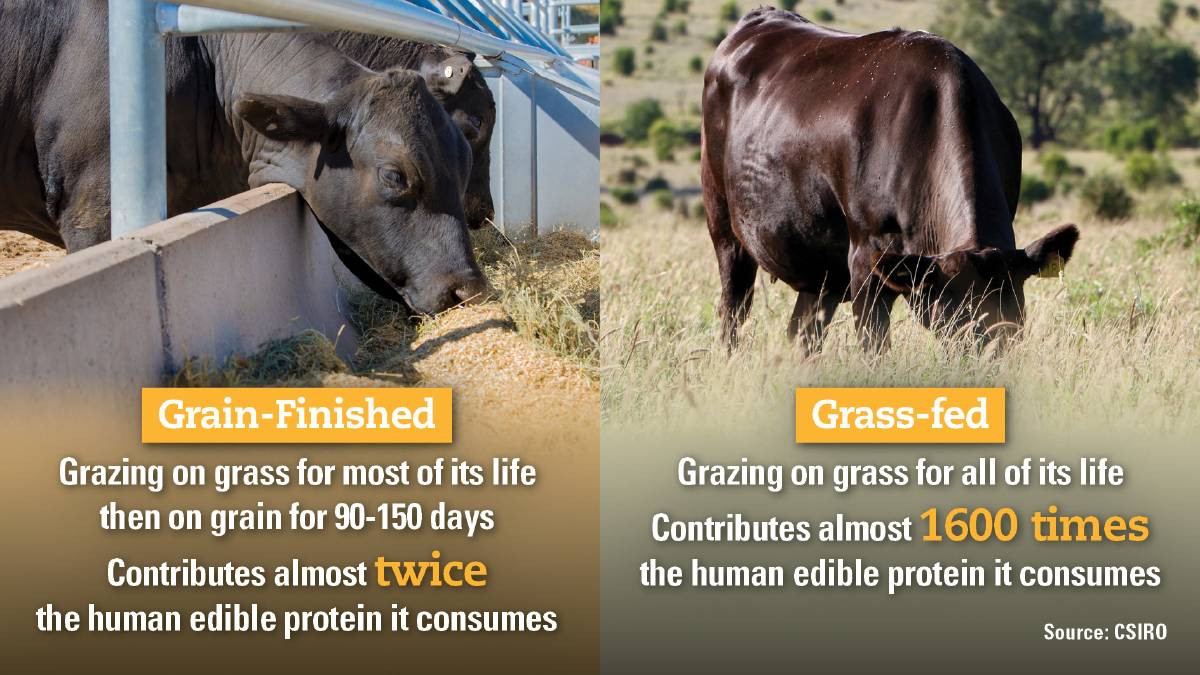 CUTTING-EDGE research from Australia's national science agency has turned on its head the perception that cattle are eating grain that could feed people and beef country would be better utilised growing crops.

The CSIRO work aimed to test assumptions that cattle consume more resources than they contribute to the food system. It found the opposite.

Ruminants are a superb use of land, and grain, in terms of contributing valuable protein to feed the world.

That provides an added dimension to discussions around beef's environmental footprint.

Livestock scientist Dr Sigrid Lehnert, a member of the research team, explained the concept was coined by United States livestock researchers to look at the amount and quality of human-edible protein an animal production system draws on compared to what it contributes to human nutritional supply.

The CSIRO team plugged the concept into a model of typical Australian beef supply production, where animals grow on grass for the majority of the time.

The study, published in the journal Animal, is the first time the concept has been applied in Australia.

It rated Australian grain-fed beef a score of 1.96 and grass-fed with a very small amount of grain a score of 1597, where a number greater than one means it has a positive contribution to meeting human nutritional requirements.

"If you talk to people who are rejecting red meat on environmental grounds, what they say is beef is resource-intensive," Dr Lehnert said.

"This is perhaps because if you look at tonnes of feed cattle consume in isolation - those numbers seem very large.

"By applying this concept of putting protein for humans at the end and calculating back what is put into a system, we've come up with this finding that we believe will surprise people.

"The work offers a different perspective on the decisions weighing up protein choices in our diets against environmental indicators."

CSIRO scientists also studied how much methane is produced in the two production systems. On average, grain-finished beef generated 30 per cent less methane per unit of beef than the grass-fed system. This difference is largely because animals grow more slowly when fed solely on grass, so they're on the planet longer.

The bottom line, according to CSIRO, is that the picture is complex when taking sustainability into account in food choices.

The research also means the beef sector now has benchmark figures for the protein it contributes to the food supply, which will help track improvements and compare efficiency to other protein production systems when they are assessed using the method.

Dr Lehnert said the research could assist cattle nutritionists or feedlot operators to tweak nutrition and rations to make outputs even more positive.

"For example, increasing feed options that do not compete with potential human food sources would take that equation into more and more positive territory," she said.

The research was undertaken as part of CSIRO's Future Protein Mission, which aims to improve the productivity and sustainability of new and existing Australian protein industries through science, innovation and technology.

Future Protein Mission lead Professor Michelle Colgrave said that it was critical for Australia to obtain these benchmark figures for the beef supply chain.

"Research like this could help consumers assess their options in terms of what protein foods they choose in relation to sustainability," she said.

"It also could be yet another positive selling point for Australian beef in export markets."