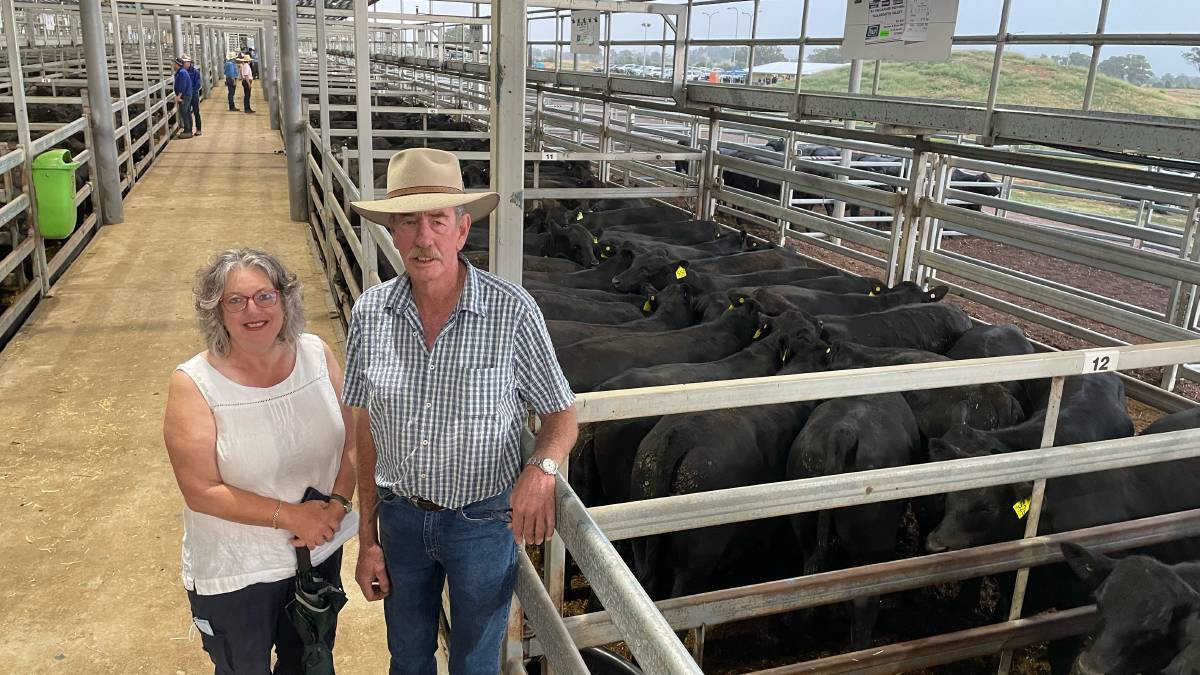 THE annual northern Victorian weaner sales made spectacular history this week, kicking off with remarkable bids for pure Angus at Wodonga on Wednesday, where 4500 head were yarded, to reach a top of $2880 a head for genuine weaner steers.

The leading pen from P and C Klippel, Berringama, Victoria, sold through Corcoran Parker, averaged 441 kilograms at nine to 10 months of age, sporting Alpine blood, and were purchased through Nutrien Toowoomba.

Bids came thick and fast with northern buyers contributing to the frenzied demand for quality calves off grass, with only a handful of tail-enders selling for close to last year's top prices while most landed bids in the $2300 to $2500 range at 350kg to 370kg.

The calves from JC and JM Maddock, Staghorn Flat, Vic, made $2610 for 407kg at nine to 10 months with Dunoon blood sold through CP.

Champion pen of Angus steers presented by Angus Australia went to John and Judith Patterson, Tallangatta South, Vic. The steers were Lawson blood, EU-accredited and tipped the scales at an average of 385kg. They sold for $2490. 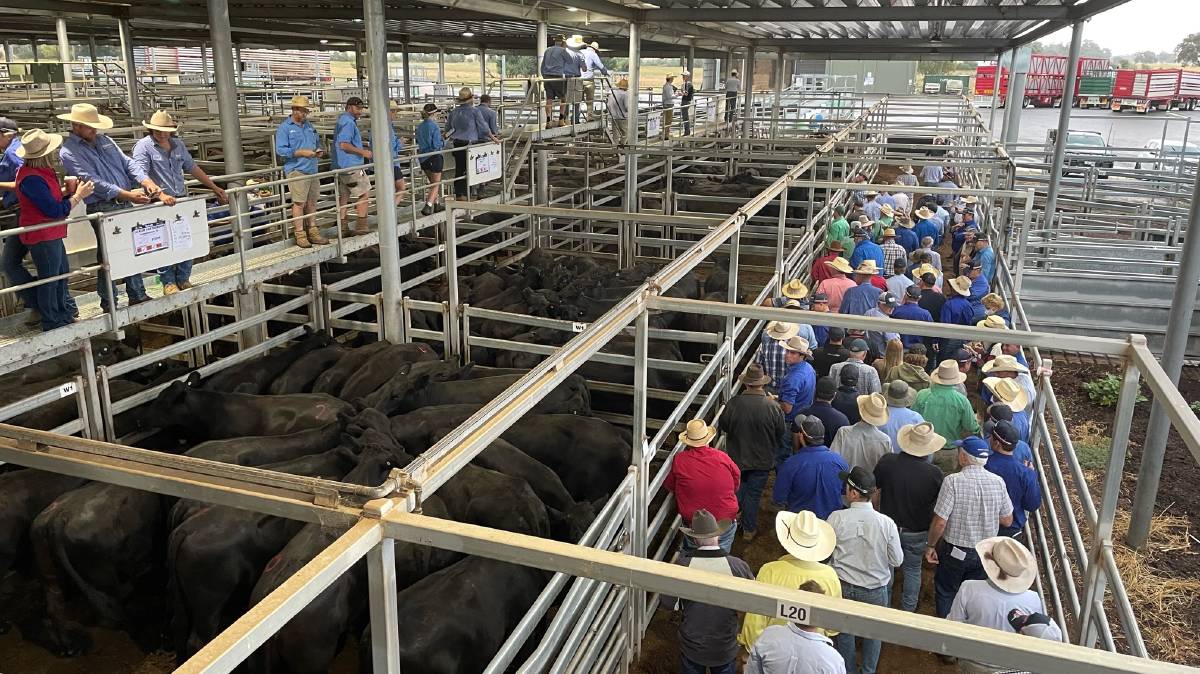 Feeder steers made to $3160 and heavy heifers to $2540 at Wodonga on Wednesday. Photo: Karen Bailey

Michael and Ruth McCormack, The Cascade Pastoral, Tallangatta Valley, Vic, sold to $2570 for 378kg for nine to 10 month old calves with Dunoon and Rennylea blood through Brian Unthank going to Rangers Valley via Glen Innes.

Best presented pen as awarded by the NVLX went to the Reid family, Fairlea Farms, Tallangatta Valley, making $2590 for 399kg at eight to 10 months with Dunoon and Cascade blood.

Weaner Angus heifers also reached new heights, making to $2400 for 388kg from BF and EM Benson, Merrawarra through Rodwells, significantly up on last year's Wodonga average of $1400 and a top of $1880. Most Angus heifers at this year's first sale sold between $1800 and $2100.

WJ Dickson and Co, "Balmoral" Indigo Valley, Vic, sold to a top of $2350 for 392kg at nine months, with Dunoon and Fernhill blood, through Schubert Boers.

Champion weaner heifers, as awarded by the Angus Australia, sold through Rodwells for $2210 at 345kg from the McKenzie-McHarg families, Bullioh, Vic, and sported verified Jarobee blood going to the Liverpool Plains through Tamworth agents.

In fact Davidson and Cameron with Nutrien, both from the country music capital, bought most of the better Wodonga weaner heifers this year, including a pen from P and J Anders, Leneva, Vic, for $2230 at 363kg. 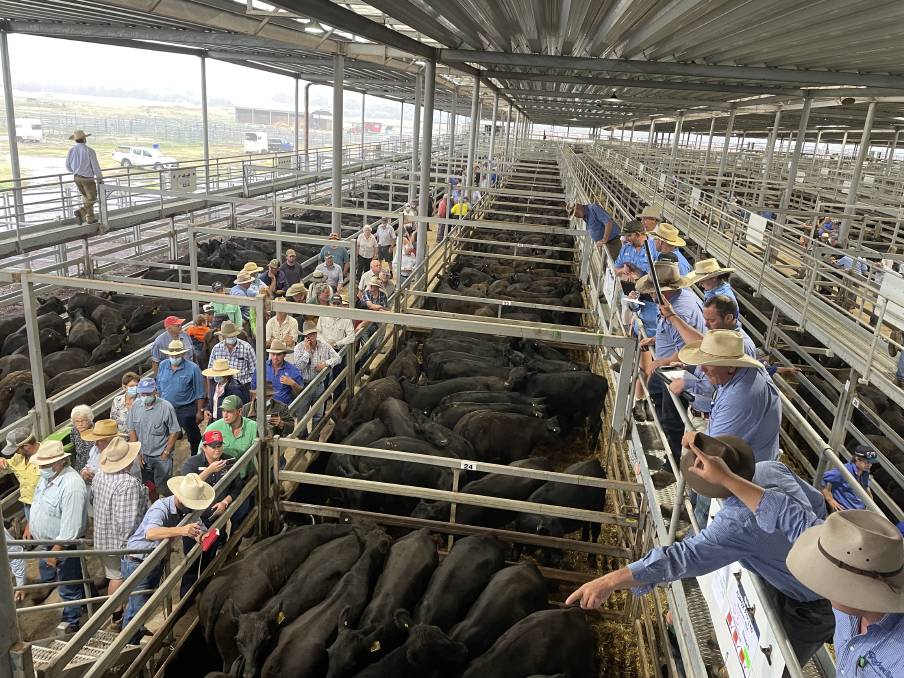 The quality of the yarding was exceptional at Wodonga on Wednesday. Photo: Karen Bailey

Lake Birubi, Bungowannah, sold to the Northern Tablelands for $2290 at 373kg with Temania and Booroomooka blood. A sister pen 328kg made $2160 going the same way all sold through CP.

As demand from the north swells on the back of new rain there is optimism for the remainder of the northern Victorian sales with more than 14,000 weaner calves on offer this week, although agents ahead of the sales were reluctant to talk up the possibility of yet more cattle records being broken.

"The draft is not heavier than last year. It would be a brave man to make a prediction saying prices will go up and on in the new year," said Peter Ruaro from Rodwells. "But historically the northern Victorian sales are the top of the drop; cream of the crop. These are the premium calves."

Pens of European accredited steers, yard weaned and grass reared, would be likely to top the bids this time around.

The average steer was bringing $2000 a head, and can return a gross profit of $400, thanks to the cost of cattle being accepted further up the supply chain.

"They're all going back to a paddock with plenty of feed. If not this year, it never will be," said Mr Ruaro

Craig Schubert, Schubert and Boer, said: "Pre-Christmas we were regularly surprised by the strength in the market," he said. "I can't see any reason why this won't continue.

"Feeder prices have put a floor in the market."

"Buyers now realise it has gone to another level. It's a good time to be breeder and they need it."