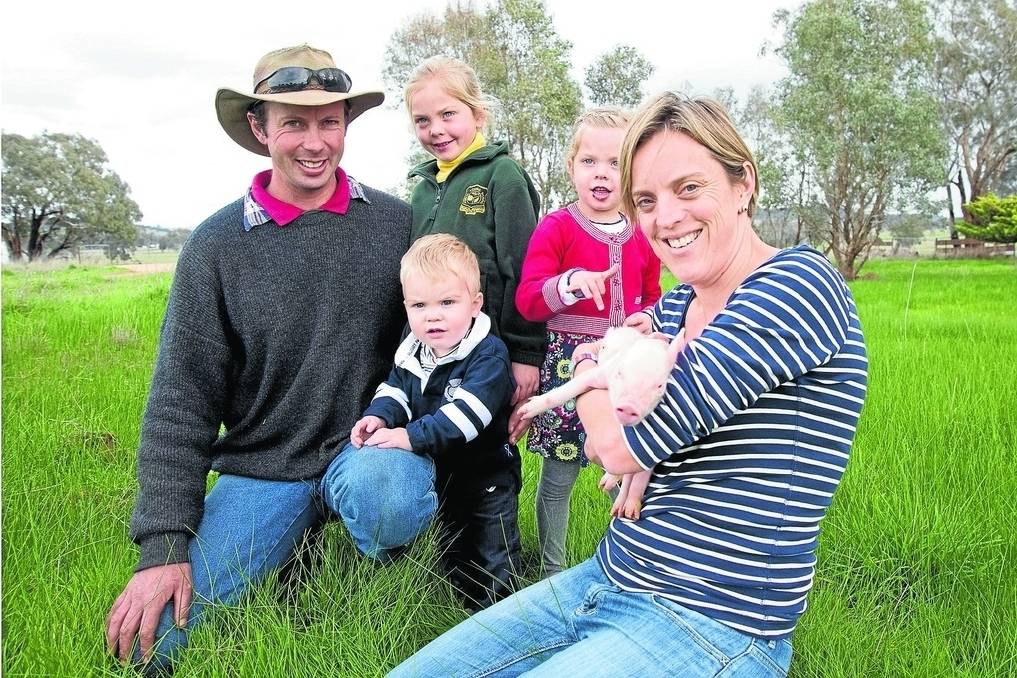 She also operates a 2200-sow piggery, Blantyre Farms, at Young, with her husband Michael, which has up to 25,000 pigs on the ground at any time of the year.

In the past five years the couple have doubled the size of the operation and "spent millions" upgrading and renovating the business' infrastructure.

As a guest speaker at this year's Country Women's Association of NSW state conference in Tamworth, Edwina spoke about her work with Australian Pork Limited (APL) promoting a positive story about pig farming to counter misleading and inaccurate information pushed by animal activists.

The Beveridge family experienced first-hand the "distressing" activities of animal activists when in May 2013 farm staff discovered hidden video surveillance at the piggery.

Edwina said the incident left the family - including their children, Alice, 7; Sophie, 5, and Sam, 3 - and staff feeling "violated", while also upsetting and distressing the farm's pigs.

"It was a tough situation and very difficult to live through, but what doesn't kill you makes you stronger," she said.

"We had the support of family, friends, the town and community, as well as from within the industry - we never considered giving it away."

The Beveridges have since increased security measures at the property and Michael regularly heads out at night to check the property - "even though it's been two years since the incident".

"We thought we had to be perfect - we have 1000 pigs born a week, which means there will always be some blood and deaths, but we're not cowboys," Edwina said.

"The RSPCA and Department of Primary Industries veterinarians do regular spot checks and are happy with how the operation is run, while we also have a vet on staff.

"We care about our pigs - that's why we went sow-stall free and spent a lot of money upgrading our facilities, but it's hard to be perfect."

Edwina said it was a "sackable offence" for any staff member on the property to mistreat pigs - "that's how seriously we take animal welfare".

The health and safety of the property's pigs are first and foremost in the Beveridge's mind, and operations are geared to reducing the risk of introducing disease.

Any visitors wanting to come onto the property have to wait 48 hours if they've previously been to another piggery, and when people visit they are required to wear clothing provided by the Beveridges.

They don't allow visitors onto the property who may have recently been overseas.

Edwina said animal activists showed no concerns about introducing diseases into piggeries as they often moved from one farm to another without any such thoughts for the pig's health status.

"In a series of incidents in Queensland activists broke into piggeries across three consecutive nights, and such actions have the potential to easily spread disease," she said.

The pig industry is hitting back at activists, with a series of videos created by APL and featuring Edwina talking about operations at Blantyre Farms.

Edwina is the daughter of innovative pig industry leaders, Dugald and Jeannie Walker, Young, who bought into the piggery industry on April 1, 1984.

She was eight years old at the time.

As an adult Edwina worked as a chartered accountant for a while, but returned to work for her parents in 2000.

"The move home wasn't a hard decision to make - I love the business," she said.

In 2006 Edwina married Michael, originally from Harden, and they took over the family business in 2007 and started farming in their own right.

In the years since, Edwina and Michael have worked towards expanding and upgrading the piggery.

When the couple took over the farm was a 1000 sow operation but has since doubled in size.

Infrastructure upgrades have included renovations to old sheds and building new sheds so all the Beveridge's pigs are housed indoors, which Edwina said was better for them than running free range.

"We have 1000 piglets born a week, and we can expect losses of up to 10 per cent in a housed situation, however, in a free range operation this can be closer to 50pc due to the sows crushing piglets by lying on them and dealing with predators and the cold," she said.