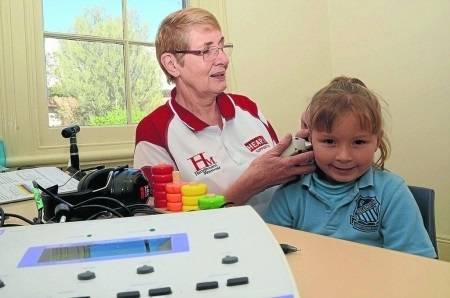 Through initial assistance from Dubbo and District Deaf Club (DDDC) the Hear Our Heart ear bus project was launched.

Established three years ago, the group has since raised enough money to purchase hearing equipment and nearly enough for a small bus equipped to conduct ear health and hearing services.

These are conducted at each of the child care services, private and state primary and high schools in Dubbo and the towns of Wellington, Dunedoo, Gilgandra, Narromine, Trangie, Warren and Nyngan where Hear Our Heart (HOH) committees have also been established.

Local Department of Education hearing support assistant principal Donna Rees said after working with education and health departments and other advocacy groups the HOH project devised a program that worked well in the Orana region.

She said the project could be easily duplicated state-wide with good management, communication and partnership agreements with state bodies and non-government organisations.

"The program we developed is working well for us," Ms Rees said.

During the period HOH has also grown strong ties with the Rural Doctors Network, Royal Institute of Deaf and Blind, Ronald McDonald Charities, Royal Far West and other private volunteers.

The project initially stemmed from Ms Rees and two other members of DDDC, Rachel Mills and Rowena Galway, whose children also have hearing disabilities.

The major disorder is Otitis Media, or glue ear, which can cause problems with a child's hearing due to the middle ear filling with mucus and dulling normal sound reception.

This reduced hearing can also be problematic to a child's communication, learning and behaviour skills.

The major function of the project is educating school staff to the awareness and identity of symptoms among their students.

The lesser, but more expensive, part is the testing.

"We just don't give teachers a checklist, we give a good and thorough understanding of what they might be looking for with a child in a classroom that may have behaviour, learning, physical, speech, language or social problems all of which could be associated with hearing loss," Mr Rees said.

"Research is saying children from nought to seven are most susceptible, but our focus will be on three-year-olds to school leaving age."

The group has purchased testing equipment and has the services of volunteer retired audiologists, who test school children.

"They are for a full-time audiologist and full-time ear health education case worker," Ms Rees said.

"This has been a wonderful outcome for us."

Since April last year when ear health and hearing tests began through the region some 1000 students have been tested of which at least 500 have had referrals for either rescreening, or for rechecking follow-ups.

"This is a very high percentage and well above health statistics which reveal one in three children suffer Otitis Media," Ms Rees said.

However, she stressed follow-ups may only be minor ear health checks with a general practitioner.

"But some are referred to our ear, nose and throat specialist, Dr Taeed Quddusi."

Now with a part-time project manager and volunteers the group has begun five day-a-week testing.

VOLUNTEER retired audiologists are rare enough, but they are hearing the call of help from the Orana region's Hear Our Heart ear bus project team.

Robyn Little gives her spare time to the cause and travels from Sydney to give school children ear examinations and hearing tests.

"I check the middle ear with some very expensive equipment recently purchased by the group which can take photos inside and also checks pressure behind the ear drum," she said.

"As well, I play games with students using simple toys such as blocks during hearing tests.

"As soon as they hear a sound they quickly place a donut block on to a spool so I can ascertain their reaction to the sound they hear."

The digital technology takes digital images of eardrums which can be emailed direct to an ear, nose and throat specialist in Dubbo for immediate advice or follow-up treatment.