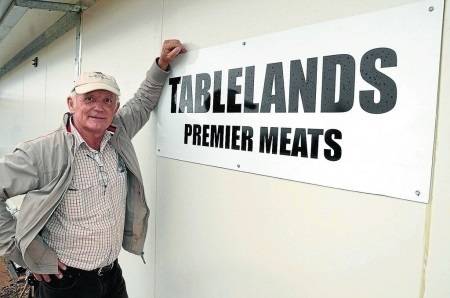 SLAUGHTERING up to 45 lambs in a day's kill may not be big business for most abattoirs in NSW, but cool room capacity and a limited power supply determines this number at a small, but enterprising abattoir near Canowindra in the state's Central West.

SLAUGHTERING up to 45 lambs in a day's kill may not be big business for most abattoirs in NSW, but cool room capacity and a limited power supply determines this number at a small, but enterprising abattoir near Canowindra in the state's Central West.

As most of the meat processing industry slips further down the path of consolidation - including the recent controversial sale of Primo's Scone abattoir to Brazilian giant JBS - Stephen and Dorothy are making their own success at the small, local end of the scale.

Red meat species such as lambs, sheep or goats make up each Monday's tally, along with pigs, at their business, Tablelands Premier Meats, where three days of chilling is provided before release.

Other species such as chickens, turkeys, ducks, or even emu or alpaca are slaughtered on Thursday, but as they don't need the same chilling time they are ready for delivery or pick-up that afternoon or the next day.

Because the business is in a rural lands area, the power supply is only single phase.

That's a negative as well as a positive to owners Stephen and Dorothy Tamplin, who say their "little" abattoir - fitting into a total area of 95 square metres - fills a "nice niche" between the bigger trade and export slaughterhouses.

"This size has proved not only good for us, but also good for a lot of small operators who are losing access to major abattoirs for their stock processing," Mr Tamplin said.

"A big abattoir putting through 1000 sheep a day really doesn't want to know about your two, my three and somebody else's four sheep for private kills.

"But there are a lot of people who want to grow their own meat on their farm and have it for their own consumption or who want to make a living from selling it to friends, family, or even at farmers' markets."

The Tamplins started off in 2012 just processing lambs.

"Then we were asked to do a couple of goats, and then a couple of pigs and one thing led to another," he said.

The Tamplin's product is labelled under the Tablelands Premier Meats logo while stock slaughtered for other people is acknowledged as processed by the company.

Being a small abattoir employing six staff the Tamplins only have a small footprint.

"We don't take up a lot of space, just 95 square metres in total when you combine the slaughter area, dressing and butchering, processing, weighing, chilling and packaging," Mr Tamplin said.

The complex is chemical free.

"We use no chemicals in our processing and our microbiology tests, done every month, prove we are not growing harmful pathogens."

They use an ultraviolet high pressure filtration system for water which is not chlorinated.

"Other abattoirs have to use chlorine in their water which leaves chlorine residue on the animals and carcases," he said.

"That results in... meat losing its organic status, so our abattoir also has this as a positive."

All waste is composted and returned back to the paddocks on the 28-hectare property and water is not recycled, but is used to water pasture.

"It goes through an evaporation trench and filtered through rock and sand," he said.

As an insurance for the future the Tamplins participate in the National Residue Survey (NRS) so they can keep track of all their product going out of the abattoir.

"We don't have to do this but it is a safeguard and nobody can come back at us as we have the test results on record," Mr Tamplin said.

Tablelands Premier Meats may be a micro abattoir, however, the Tamplins say they meet a need.

"We are never going to compete with JBS or Fletchers but we provide a beneficial service to others, especially small producers who want their own product processed in the way they are happy with," he said.

THE road to creating an abattoir went "fairly well" for Stephen and Dorothy Tamplin who set up their own small processing facility on their property near Canowindra just three years ago.

"We wanted an on-farm butchery where we could sell what we grew," Mr Tamplin said.

Like many producers who like to eat their own product the Tamplins had to have their stock processed elsewhere.

"But getting the carcase of my own animal back was not a certainty," he said.

People told them it couldn't be done so easily, but Mr Tamplin (pictured) said he could see other abattoirs about, "so it can be done".

"I went through all the rigmarole of council approvals, food authority approval for the plans before we started and I even trained as a meat inspector," he said.

"I had a lot of co-operation from Cowra Shire Council and the NSW Food Authority and the approval process went through fairly smoothly," he said.

The abattoir has the capacity for 200 head of sheep a week, but the cool room capacity is for only 45 carcases.