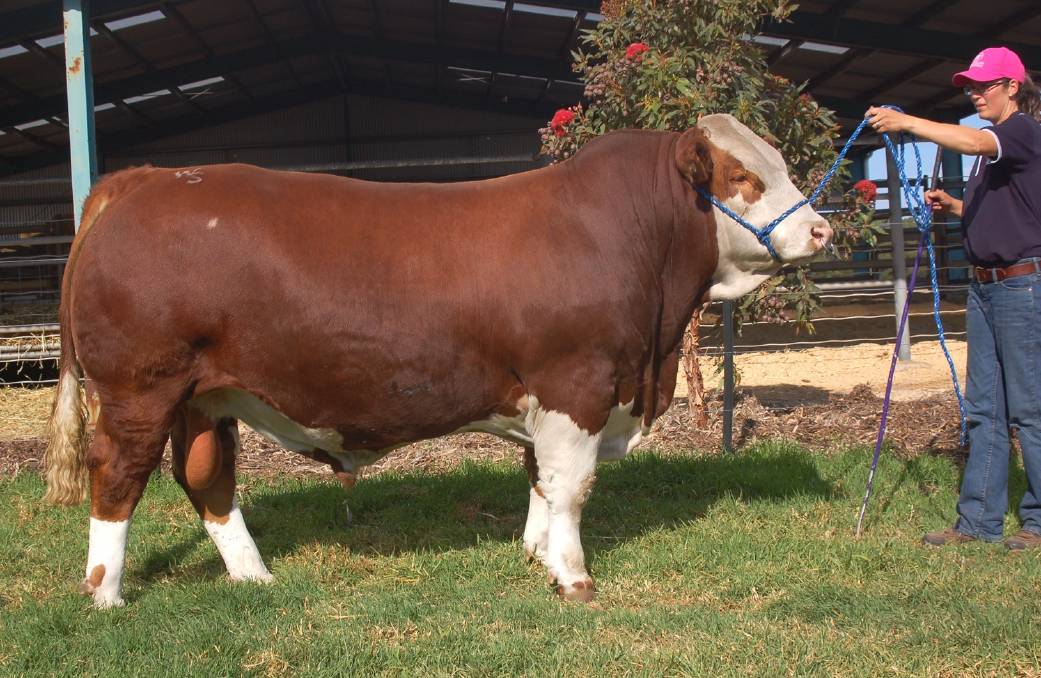 Woonallee Simmental stud asserted its position in the top echelon of the SA seedstock industry, selling Woonallee Justified for $45,000.

Woonallee Simmental stud asserted its position in the top echelon of the SA seedstock industry with a huge gallery of more than 300 buyers and supporters from across Australia and New Zealand attending its annual production sale yesterday at Furner.

It didn't take long for the magic to happen, with Lot 1 bull Woonallee Justified knocked down at $45,000 to Doug and Jan Bradshaw, Blue Dog Simmentals, Wandoan, Qld after some intense bidding.

It was just $1000 shy of the $46,000 record stud principals Tom and Lizzy Baker achieved at the sale two years ago.

The dark red, dehorned bull was the first son of Woonallee Gangster the stud had offered.

Gangster was an embryo bred bull from Buzzard Hollow Ranches, Texas, US, which had been retained by the stud and is leaving tremendous, industry-focused cattle.

His son - the sale topper - had turned many heads on the show circuit last year including winning junior and grand champion bull at the 2014 Royal Adelaide Show at just 15 months of age last September.

The June 2013-drop had an eye muscle area of 134 square centimetres and fat measurements of 7mm rib and 6mm rump fat.

"He is a very unique style of bull - moderate, thick, easy doing, outcross bull with a lot of style and substance," Mr Baker said.

The stud sale gross of $546,500 was outstanding in every way, with a total clearance except two embryo packages at the end.

"It was a great vote of confidence in our program but also for the Simmental breed as well," Mr Baker said.

The day started brilliantly with Woonallee's commercial heifers offered on Auctions Plus that morning.

This included a new Australian weaner heifer record with a pen of 31 Simmental-Angus weighing 373 kilograms which made $1255.

Mr Baker said they were a fantastic line of heifers but was thrilled with the prices and to see many regular clients back to buy them.

"In both the stud and commercial sales we are getting those repeat clients which is the thing that makes it rewarding for us and gives us confidence our breeding program is heading in the right direction."