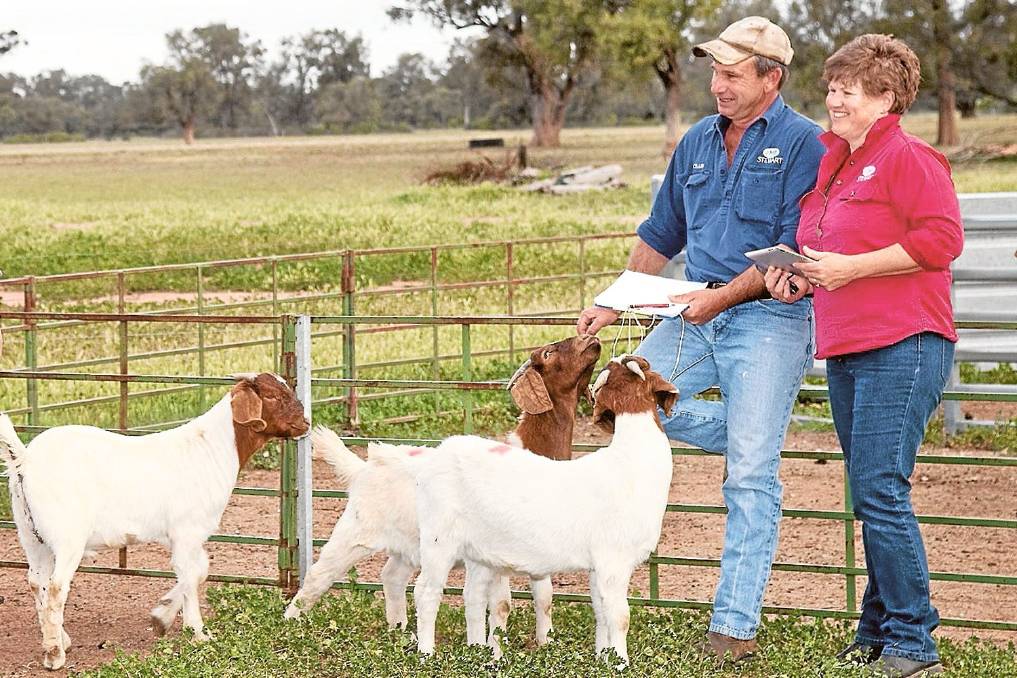 GOAT producer Jo Stewart is an entrepreneur, according to her husband Craig who says she is always looking for something to call her own.

GOAT producer Jo Stewart is an entrepreneur, according to her husband Craig who says she is always looking for something to call her own.

Little did she realise, taking on poddy goat Olivia in 2007 would turn into a viable paddock-to-plate business and see her dubbed the Gourmet Goat Lady.

"I told Jo to go do a budget for this next great idea she had and show it to me - I must have had a weak moment because the next thing we bought 13 does from Wongarbon then borrowed a buck and joined them."

In 2009, the Stewarts bought another 17 does to add to the herd at "Buena Vista", Collie, adding to the first lot of 13, which had all had kids.

"I said to Jo 'what are you going to do with them now? They have to be earning something," Mr Stewart said.

The Stewarts had the first drop of wethers processed and the meat given to friends.

"I kissed each one goodbye - there were tears everywhere."

While Mr Stewart was reluctant to get too involved in the goat enterprise at first, he admitted his wife was on to something special.

The family property is now home to 230 does, which are kidding again this spring.

"The thing that started us selling was we had to buy meat for $15 a kilogram," he said.

"We originally started selling our beef under the brand BV Farm Fresh.

"We started looking at marketing it and from that discussion we started to think of selling the goats that way."

With funding from the Department of Primary Industries, the Stewarts developed a marketing plan with Melanie Trethown, Mudgee, for selling both beef and goat.

"We really stumbled around in the dark - we didn't feel like it was right," Mr Stewart said.

The Stewarts started to focus on the goat production instead.

Mrs Stewart said they started going to farmers' markets in Dubbo once a month.

"There is a lot of work in it but the biggest thing was getting people to try goat," she said.

"There is a big difference between marketing or promoting and then selling."

As part of the marketing plan, the Stewarts had to develop selling avenues.

After dozens of phone calls and help from similar producers, they sent their first lot of 13 capretto (or baby goat, about six to 12 kilograms) carcases to a restaurant in Sydney.

"We started (having the goats processed) at the Binnaway abattoir but then it shut, which threw a spanner in the works - it was in the middle of a capretto run."

Their only option was to start using the Nyngan abattoir, about an hour and a half away.

But using the Nyngan abattoir meant they would have to source another butcher as logistics meant the carcases wouldn't be able to get to the butcher they were using in Mendooran.

"We ramped it all up a bit after that, started door knocking and got our goat into places like the Lazy River Estate and Sprout Cafe in Dubbo and the Cactus Cafe in Wellington."

Through Feather and Bone, a provedore wholesaler at Marrickville, in Sydney's inner west, the Stewarts were able to supply high-end restaurants in Sydney as well as the public.

Helping to get their brand off the ground the Stewarts entered the Sydney Royal Show deli meat competition just a few years into their newly developed goat enterprise.

In their first year they entered three different trays of sausages and won three medals.

The next year they entered more products and won four medals and last year they upped the ante, winning five medals.

"We thought 'we're on to something here' because we won 12 medals in three years," Mrs Stewart said.

The Stewarts weigh their goats every week aiming to supply the capretto market with either carcases younger than 40 days old (usually six to 12kg carcases), or 12 months old (which yields a carcase up to 20kg).

Mr Stewart aimed to offload about 1500 carcases a year, which would still not be enough to meet demand.

"There is so much demand for good quality goat. We couldn't fill it if we tried," he said.

From July to September, they had sent 40 large carcases to Feather and Bone alone.

"We run into a lot of people who have a passion about goat, even chefs."

New kids on the block

CRAIG and Jo Stewart are keen to showcase the potential of their goat meat, saying there is more to it than curries alone.

Once they began to generate interest, through friends and farmers’ markets, their confidence in the product grew and they began talks with Meat and Livestock Australia (MLA) to further promote goat as a household staple.

“Out of our talks, the MLA would co-fund a new marketing plan, new branding and a new website,” Mrs Stewart said.

“We wanted (our brand) BV Farm Fresh, but it didn’t portray what we sold. I was asked what people call me and I said ‘the goat lady’ and it has just stuck.”

MLA asked the Stewarts to represent goat at the Australian Food Services Show earlier this year where their goat meat was used in the Chef of the Year competition.

“There was phenomenal interest for goat there.”

During the show, talks with Pino Tomini Foresti from Pino dolce Vita, a speciality cooking school in Kogarah, said it was the best capretto he had ever seen in Australia.

Last month, the couple hosted a busload of “foodies”, including restaurant owners, chefs and butchers, at their Collie property “Buena Vista”.

The two-day tour from Sydney, which also showcased sheep production at Armatree, gave the Stewarts an opportunity to level misconceptions about the product.

“We have run into a lot of people who have a passion about goat, even chefs who want to cook it more,” Mrs Stewart said.

She said the two biggest issues were the lack of consistent supply and quality.