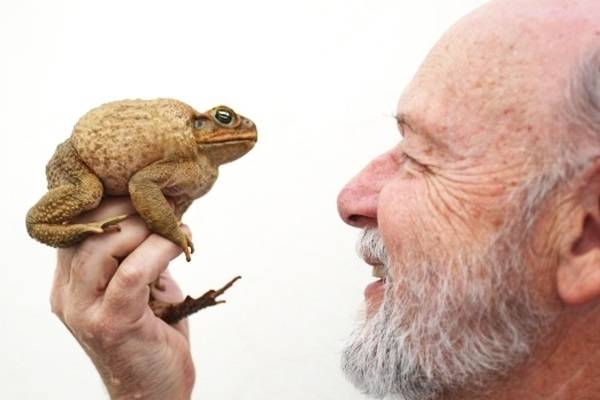 Professor Rick Shine has shown the most humane way to kill cane toads is to freeze them.

THE most humane way to kill cane toads is to put them in the freezer alive, Sydney researchers have found.

THE most humane way to kill cane toads is to put them in the freezer alive, Sydney researchers have found.

The once-popular method was used to kill millions of the poisonous pests until it was banned 20 years ago because animal ethics committees considered it inhumane. It was thought cane toads toes would freeze while their brain remained warm enough to register the pain.

"It's hard to tell (when an animal is in pain because) you can't ask them directly. There's a danger that it's feeling pain but it's just not registering," said Professor Shine.

His team at the University of Sydney implanted small data-loggers into a handful of toads forebrains to measure their pain response as they froze to death. "It's cutting-edge stuff," he said.

After keeping the toads in the fridge for a few hours to cool their bodies enough for their brains to shut down they were placed into household freezers. Throughout the process the data-loggers did not register pain signals.

Professor Shine said it appeared the cane toads bodies were going into a state of unconsciousness and their brains no longer functioned by the time their skin and organs began to freeze.

"The effect of cold on cane toads' nerves is very similar to local anesthetic in humans," he said.

"We can feel pretty comfortable that it isn't experiencing any dramatic pain."

The results offer communities in northern Australia, who are attempting to control large populations of the pest, a simple and humane method of killing them. Current ethics regulations recommend that the general public kill cane toads by hitting them on the head with a hammer.

"But a slight misjudgment may result in severe pain for the toad, and a splash of toxic poison up into the hammer-wielder's eyes," Professor Shine, whose research is published in the journal Biology Letters.

"Popping toads into the fridge for a few hours to cool down then moving them to the freezer beside the ice cream is kinder and safer for everyone involved," he said.