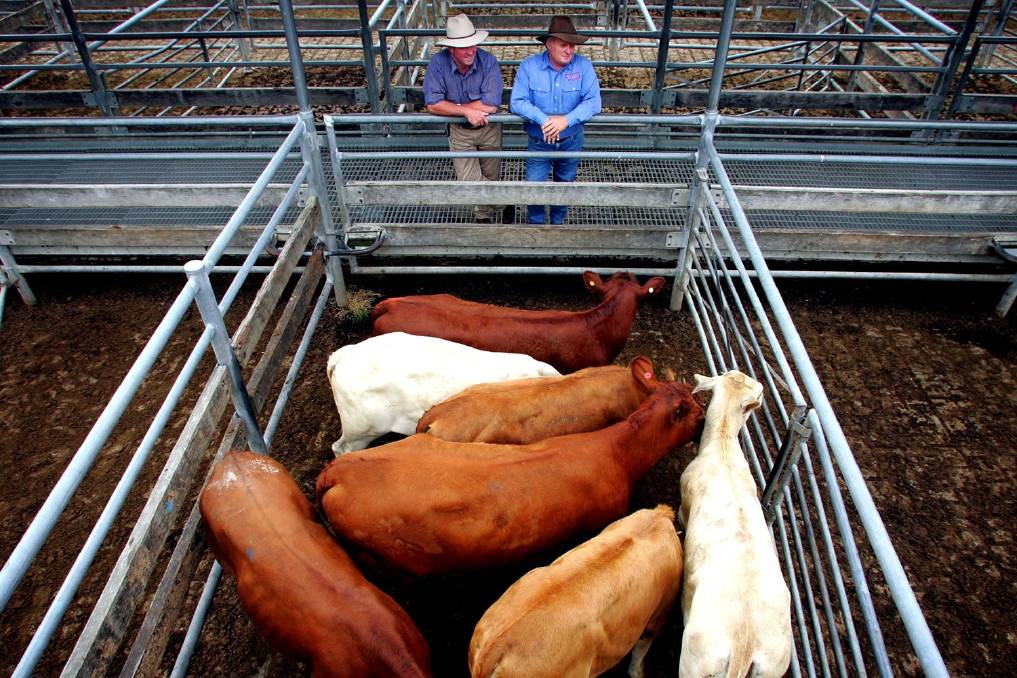 The CCA is constrained by a lack of funding, staff and resources, says the Senate report.

A FAILURE by peak bodies to represent the grassfed cattle sector in the 2011 live trade ban has prompted recommendations for structural reform.

A FAILURE by peak bodies to cohesively represent the grassfed cattle sector during the 2011 Indonesian live trade suspension has prompted sweeping recommendations for structural reform.

Chapter five of the Senate report on the recently completed inquiry into the grass-fed cattle levy details how and why industry structures failed to deliver effective representation for producers during that catastrophic industry crisis.

The relationship between Meat and Livestock Australia (MLA) as the industry’s service provider and the Cattle Council of Australia (CCA) as the sector’s peak council is one of the report's central themes.

Evidence presented to the inquiry suggested the effectiveness of the CCA and Red Meat Advisory Council (RMAC) - as bodies responsible for overseeing levy-funded expenditure and directing the industry - have been “compromised by the conflicting interests of different industry sectors and lack of resources on the part of CCA”.

“These dynamics came to the fore in the context of the 2011 suspension of the live cattle export trade to Indonesia,” the report says.

“The event brought to light not only the volatility of the trading environment but also raised serious questions about industry representation, preparedness and capacity to defend and promote the industry's interests in an effective and co-ordinated manner.

“The need to respond to the ban brought with it confusion regarding the roles and responsibilities of MLA, CCA and RMAC.

“CCA argued that the ban revealed the extent of scope creep by MLA which had overreached into a 'strategic policy void', largely because CCA had been unable to effectively develop and manage strategic policy.”

The 105-page report details many key issues, but doesn't cite an infamous anecdote of CCA representatives waiting in frustration outside then-Agriculture Minister Joe Ludwig’s office as he held tense discussions with MLA and LiveCorp leaders in the harrowing days following the ABC Four Corners broadcast. The program “A Bloody Business” aired on May 30, 2011, and sparked political ramifications which resulted in the month-long Indonesian trade suspension seven days later.

As MLA officials walked out of the Minister’s office after almost an hour, the CCA was told their input wasn’t required, despite extensive industry experience in the complex Indonesian market.

“At the most critical time in the industry’s history its representative bodies failed to give effective advice and direction,” one senior source said last week.

Putting industry and political personalities aside, insiders say the report’s bottom line remains unchanged: that is, MLA holds the purse strings tightly while CCA is forced to beg for money to stay afloat and do its job effectively - ironically from the very organisation it’s meant to be monitoring.

Chapter five agrees with that viewpoint, saying the live cattle suspension confirmed a view held by many producers that their industry representative bodies and structures did not work, “because they were unable to draw on them to take control of the situation and represent producers' interests effectively”.

“It demonstrated to them that RMAC was incapable of giving advice to the Minister because of the conflicting views of processors and producers,” the report said.

“At the same time, the argument was made that a conflict of interest between producers and processors… characterises MLA governance, rendering it incapable of effectively serving the interests of producers.”

Quoted in the report, Bindaree Beef Australia argued that the combination of issues associated with funding and the representative capacity of MLA and CCA amounted to “a market failure in the administration and management of industry structures”.

Compared to MLA's capacity with 248 full-time staff and 2012–13 revenue amounting to $168 million, CCA's average income over the past five years was approximately $1.39 million and it has five full-time equivalent personnel, the report said.

“If they can ignore the government, what hope does a poorly staffed industry council have?”

In evidence, Bindaree Beef said it was unreasonable to expect a very small, poorly funded industry peak council could effectively provide oversight and direction to an organisation hundreds of times its size.

“This is compounded by a long standing cultural attitude within MLA that it is above direction,” Bindaree said.

“During the live export suspension the government’s efforts to direct MLA to support the industry during the aftermath were loudly and publicly ignored.

“If they can ignore the government, what hope does a poorly funded, poorly staffed industry council have?”

The report says CCA is underfunded as a consequence of declining state farming organisation (SFO) memberships, with the peak body acknowledging it was “grossly under-resourced” to represent a $12 billion industry.

“Although MLA enjoys guaranteed levy revenue, CCA is finding it harder to sustain itself in the face of shrinking resources and loss of membership,” the report said.

“CCA membership is comprised of 152 direct members and 15,000 cattle producer members through SFOs.

“However, the continuing decline of SFOs and their membership funds is impacting on CCA's financial resourcing and hence its ability to represent the interests of grass-fed cattle producers.”

The report also details RMAC’s unique role while raising questions about its capacity to deliver coherent leadership during the Indonesian cattle crisis.

RMAC’s primary role is to “provide advice to government on issues affecting the whole of industry”. But its current requirement that decisions only be made by consensus is of concern to producers, the report said.

“As RMAC is made up of cattle producers, lot-feeders, sheep producers, live exporters and meat processors whose commercial interests are frequently in direct conflict, constituents are often unable to establish a consensus position and therefore unable to fulfil their advisory role to government,” it said.

The Senate report made seven key recommendations: first calling for the establishment of a producer-owned body in legislation to manage the industry’s marketing and research and development levy funds.

“Under a 'one stop shop' proposition, a new grass-fed cattle producer corporation would be established by combining the current CCA policy-setting role with that of the MLA service provider function under one authority,” the report said.

Several industry analysts spoken to by Fairfax Agricultural Media expressed concerns with establishing a new representative body in legislation, believing it must be independent of government to lobby effectively for industry. However, they all agreed that the devil would be in the representative model’s details, with a multitude of potential pathways available.

While the Senate report points the finger directly at CCA and the RMAC for failings of industry leadership during the ban, the unique and tumultuous political machinations of 2011 - the hung parliament; an unprecedented social media campaign, and the former government’s failure to diplomatically engage a neighbouring trade partner - are not afforded the same prominence.

Regardless, livestock producers are now being challenged to establish a representative body simply too big and powerful to ignore in any circumstance.

Several analysts have pointed out the irony of politics being central to any proposed industry solution, given that politics was squarely to blame for the Indonesian crisis.

Groups like CCA and the RMAC were powerless to stop the unfolding crisis once the then-Prime Minister and other Labor MPs - especially those in marginal seats - felt politically threatened.

After the ABC program aired, a powerful social media campaign was unleashed via GetUp, backed by Animals Australia and the RSPCA. Those groups joined with the Australasian Meat Industry Employees' Union (AMIEU) to present a 200,000 signature petition to Parliament House on June 2, 2011, calling on Prime Minister Julia Gillard and Agriculture Minister Joe Ludwig to immediately halt live cattle exports to Indonesia and phase out the trade for all Australian animals within three years.

Groups opposed to the live export trade also reportedly worked behind the scenes strategically to drop that political bomb on Canberra converging with the broadcast of “A Bloody Business”.

Former WA Liberal MP Barry Haase said the political revolt was spearheaded by urban-based backbenchers who demanded the ban, despite being largely disconnected from the human impacts of the decision in their electorates.

“You could say they care more about animals than they do about human beings, because they are thinking nothing of the destruction of lives amongst my pastoralists in north-western Australia,” Mr Haase said in the suspension’s aftermath.

Added to the ALP’s monumental backbench revolt, the former government’s glaring failure to realise and act on diplomatic responsibilities to neighbouring trade partner Indonesia, and consult them effectively about the suspension, was also highly damaging.

The conspicuous absence of then-Foreign Minister Kevin Rudd from those critical industry-government discussions was reportedly also linked to his bitter ongoing leadership dispute with Ms Gillard.

The magnitude of the political fallout was exacerbated by numerous unique factors, including the extreme animal cruelty shown in the footage gathered by Animals Australia and the heightened sensitivities and controversies of the hung parliament. While failure of peak bodies to properly represent industry was a focus of the Senate report, it was a "perfect storm" of political and social unlikely to be repeated.

Sponsored by
"How badly do you reckon this has gone, champ?"
Test
Specialty food producers fear being cut off from online customers by Australia Post ban.
Test
Bulla Dairy Foods has thrown down the gauntlet in the battle for milk supply, announcing its 2021/22 opening price this week.
Test
The use of drones is roaring upwards according to latest data from DroneDeploy.
Test
Aust now needs to think about growing market share in China, not just regaining ground: Simon Quilty
Test
The last surviving dairy farmer in Clunes in northern New South Wales says the region is ripe for a dairy revival.
Test
Regulatory failure, poor management, behind Van Dairy woes.
Test
In what may be a world first, the Melbourne based eCommerce trading platform Milk Exchange is to hold an online auction for farm milk on Wednesady.
Test