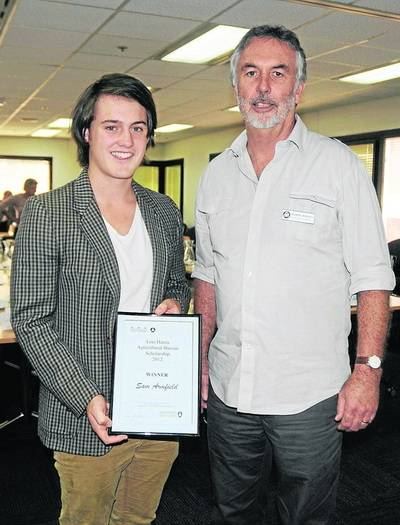 And although he was accepted into a law double-degree, he stuck by his interest in agriculture.

Sam is the recipient of this year's Lois Harris scholarship for academic excellence, which carries a $2000 bursary for a Year 12 student entering the University of Adelaide's Bachelor of Agriculture degree course with the highest tertiary entrance score.

While Sam grew up and attended school in Adelaide, he developed a love of rural life on school holidays.

"I spent a lot of time on Kangaroo Island growing up. I have family members with farms over there," he said.

"A lot of school holidays were spent there and I loved it."

The St Peters College student achieved an outstanding tertiary entrance ranking of 96.7 in 2010.

In addition, he received a merit - or 20 out of 20 - for agricultural studies.

"As soon as I started studying agriculture in Year 10, I had a strong interest right from the start. I just loved it," he said.

"It was definitely my favourite subject."

His success in the subject brought him the JO Ellis Memorial Prize for agriculture in Year 12, a year when he also served as a prefect.

When Sam finished his Year 12 studies in 2010, he was the only student in South Australia in that year to achieve a perfect 20 out of 20 in agricultural science.

After finishing high school, he took a gap year off to gain some experience in the workforce.

He spent 12 months working in Britain, teaching and career-coaching at a south London school. During that year he thought long and hard about which direction he wanted his career to take.

"Last year was a good chance to sit down and think about what I really wanted to do," he said.

"Throughout school I didn't really have any idea what I wanted to do - I had no clear direction.

"While I was accepted into law, I wasn't all that interested in it. So I thought why not pick something I know I'm good at and that I've got interest in and passion for."

While he has "really enjoyed" his education so far, he is still unsure which area of agriculture he will move into.

"At the moment, I'm not 100 per cent sure which way I want to go, but I'm interested in how we're going to meet the demand for food over the next 60 years," he said.

"I think it's going to be an exciting time to work in agriculture, and there'll be plenty of change. The challenge is to increase output and decrease inputs."

Sam says he is hoping the 12 weeks' worth of work experience that all agricultural science students undertake, will help him drill-down on the one area that interests him the most.

"I think it'll be a great opportunity to find out where my interests really lie," he said.

"Plant breeding is one area that interests me a great deal."