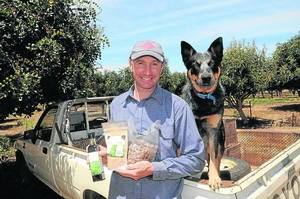 A LIFELONG career as a gardener proved a perfect background for Michael Jolley, Booborowie, to become a carob farmer.

A LIFELONG career as a gardener proved a perfect background for Michael Jolley, Booborowie, to become a carob farmer.

Combining his horticultural skills with a love of chocolate, Michael and his wife Jam decided to diversify and plant a carob orchard.

"I didn't want to stay in the garden forever," Michael said.

"We considered growing grapes and olives before deciding on carobs because they are such a unique product.

"There were no Australian-produced carob products so we thought we could make something quite unique by growing and processing them ourselves."

All products are made on-site in a purpose-built facility that contains state-of-the-art machinery including a carob kibbler, a carob mill and large carob roaster.

The long period between planting the orchard and being able to start selling products is because it takes eight to nine years for the trees to produce carob pods.

Despite the orchard being relatively young, Michael had already gained experience working with another carob orchard, also located in the Mid North.

The orchard was located near Burra, at a property formerly owned by Andrew Gebhardt, now owned by the Rowe family.

"They appeal to me as they are evergreen trees that are also very hardy."

The orchard comprises 6000 irrigated trees planted on a 31-hectare block.

Originally from European and Mediterranean regions, the carobs planted at the Jolleys' property were grafted trees sourced from Limestone Station at Broken Hill, New South Wales.

"We looked at growing them from seeds but considering the long term, it was better to buy them in and save time on growing them up to size," Michael said.

"We dug holes by hand for the first 4000 trees before we were able to afford to get an auger to put in the remaining holes."

Michael said the varieties he had planted together with Jam were much sweeter than those used overseas.

"All the carob chocolate products currently sold in Australia are from overseas," he said.

"Many of these products can taste quite bitter, but because the varieties grown here are selected on taste, our carob products have a much sweeter taste."

Harvest runs from April to May, with all of the carob pods  which when mature can range in size from 15 centimetres to 25cm  carefully picked by hand so they are ready to be processed.

A shed and infrastructure worth $1 million was set up last September so the Jolleys could process all of their carobs on-site.

This is the only commercial processing plant for carobs in Australia.

Inside the shed, Michael operates a carob kibbler, roaster and milling plant. The shed is 45 metres long, 17m wide and 8m high, with insulation on the inside of the roof preventing condensation forming on the inside.

Michael said the shed was also 100 per cent mouse-proof.

Carob fines, which are used to produce raw carob powder and syrup, kibble and seed, are stored inside.

"All we use at the moment is the outer husk," Michael said.

"The seeds are sold on and used as an E410 emulsifier."

Michael said while the orchard had the potential to produce 300 tonnes a year, it was producing 10-20t a year at the moment.

"Many people see carob as a bad substitute to chocolate," Michael said.

"Some of the imported carob products can be bitter but all our products taste very sweet.

"I am a chocoholic but I only eat carobs now. I even use the carob syrup instead of sugar on my Weetbix because it tastes so much nicer and is better for you."

As for the future, Michael said he would love to get Australian Carob Co products in every health food shop and Foodland supermarket, and create a larger confectionary range.

"To have our own Australian-grown-and-produced carob products is great," he said.

"We have some top-notch products that are arguably some of the best in the world."

* Extract from a full report in Stock Journal, November 3 issue.