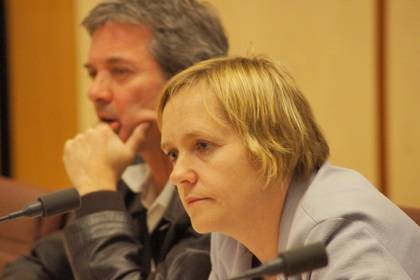 CREDIBILITY of the ABC Four Corners program, "A Bloody Business", has been deflated with a Federal Senate inquiry puncturing several major holes in its production processes, following critical questioning.

CREDIBILITY of the ABC Four Corners program, "A Bloody Business", has been deflated with a Federal Senate inquiry puncturing several major holes in its production processes, following critical questioning.

She was asked about her role in the May 30 program which sparked a temporary halt in the live cattle trade to Indonesia on June 6, along with a fierce national debate about the future of live trade.

The month-long ban financially damaged many players in the beef industry across northern Australia.

Ms Ferguson appeared at the hearing with the program’s producer, Michael Doyle, and ABC News’ head of policy and staff development, Alan Sunderland.

With his opening question WA Liberal Senator, Chris Back, a veterinarian, gained an admission from Ms Ferguson of an error made in the final broadcast program which referred to the slaughter of "Australian cattle" in Egypt in 2006.

Ms Ferguson said the ABC had relied on another current affairs program, 60 Minutes, which had claimed the animals were Australian.

Senator Back asked: "You did not have the opportunity to verify it independently that they were not Australian cattle?"

Ms Ferguson said it took seven weeks to compile a typical Four Corners program and do the necessary investigation.

Given a delay of more than 60 days took place before the program aired, the inquiry chairman, Liberal NSW Senator Bill Heffernan, asked Ms Ferguson if they had evidence of serious cruelty, shouldn’t have they reported it to the appropriate authorities for action?

Ms Ferguson replied: "No - we are journalists".

It was also stated the program used a disproportionately high percentage of the animal cruelty footage supplied to Four Corners by Animals Australia.

Senator Back estimated the program showed about 15 minutes of abattoir footage, of which he could identify only about 35 seconds of filming in abattoirs using stunning prior to slaughter.

He was able to identify three minutes and 40 seconds of footage as being shot by the ABC.

Senator Back said he was unable to attribute another two and a half minutes of footage to any particular source, leaving about nine minutes most likely provided by Animals Australia - which gathered about 11 hours of vision from 11 abattoirs during a visit to Indonesia in March.

But the program and its transcript clearly shows the station was named while implicating its cattle in a gruesome scene at the Jalan Stasian abattoir where Animals Australia investigator, Lyn White, filmed "one of the most poignant images of all" - the animal allegedly shaking from fear while watching others being slaughtered.

Senator Back said the animal was instead suffering from transit tetany.

Senator Back said he was also concerned the ABC only allowed LiveCorp’s Cameron Hall about two hours to see footage from the Indonesian abattoirs in which to pass comment for the program, within days of its broadcast - whereas Ms Ferguson said LiveCorp had two days to see it ahead of the interview.

Senator Back also criticised the ABC for withholding the grotesque images from three key industry members interviewed in the production - Ken Warriner from Newcastle Waters, Northern Territory Cattlemen’s Association president, Rohan Sullivan, and NTCA executive director, Luke Bowen - imagery upon which they were asked to comment.

The interviews had created the impression the industry members had witnessed the type of animal cruelty practices shown in the program, and were complicit with it, he said.