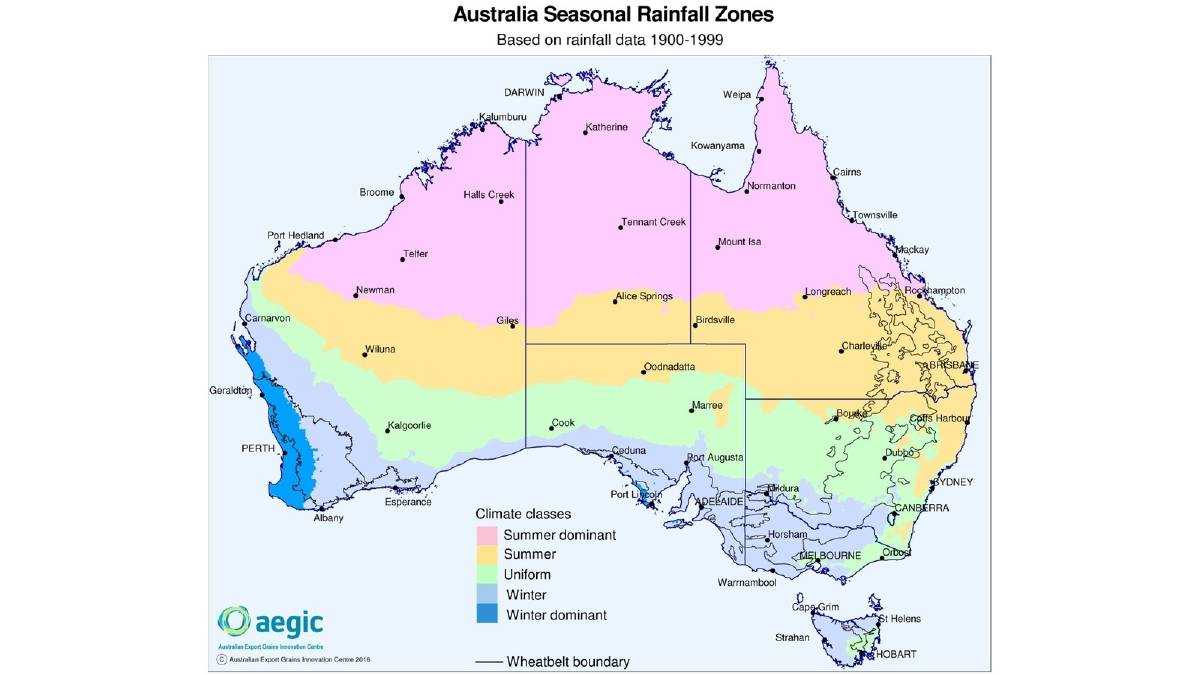 Australian agriculture developed most of its practices and culture when rainfall zones looked like this.

Australia's rainfall zones are moving south, and the Mediterranean climate zones are at stake.

Australia’s climate zones are moving south, shifting 100-400 kilometres since 2000 and threatening to wipe out the south’s Mediterranean climate.

Rising ocean warmth and changing barometric pressures in a warming atmosphere have changed the balance between summer and winter rainfall over the lower half of the continent.

Research by Dr David Stephens of the Australian Export Grains Innovation Centre (AEGIC) found that the effect has been to shuffle south the north’s summer-dominant rainfall patterns.

“Rainfall between May to October over much of the heavily populated regions of southern Australia has decreased 10-30 per cent, while summer rain has increased up to 40 per cent in some areas,” Dr Stephens said.

A consequence is that over the past 16 years, the winter-dominant rainfall Mediterranean climate of southern Australia has shrunk significantly.

Before 2000, the winter rainfall zone extended well north of the Victorian border, sometimes hundreds of kilometres north. Dr Stephens found that since 2000, this zone has contracted sharply south of the border - also by several hundred kilometres in places.

A similar contraction of the winter rainfall zone is evident in Western Australia.

Some of the shift is due to the changing temperature gradient between the Equator and the South Pole.

The temperatures at each latitude drive interactions between land, sea and air, which in turn produce the seasons that guide farming practices.

As the planet warms, the bands of temperature across the latitudes are shifting south, carrying their climate with them.

One result: Tasmania is experiencing an increase in winter rainfall, as the weather bands that once played over the southern mainland now move across Australia’s southernmost extremity.

Farmers are responding to the changing seasons, most notably by sowing crops earlier to take advantage of more summer rain, and to ensure the crop matures through a period with less evaporation than late spring, which is becoming increasingly warm (and in some areas, frost-prone).

In some places, the variability of annual rainfall has declined - because of fewer very wet years in south-western Australia, and more consistent average to above-average rain in southern South Australia and the north-west of the country.

But in other important grain-growing areas - inland Victoria, southern NSW, and across central Queensland - rainfall variability is increasing, to the detriment of farm productivity.

On the back of his study, Dr Stephens made a call for more research into how Australia’s farmers can adapt to climate change.

“Australia is going to need some of the most water-efficient farming systems in the world to mitigate the effects of a drier and warmer climate in Southern Australia.” he said.

“Research in this area is vital because Australian crop yields have been among the most affected by climate change compared to other grain exporting nations.”