Technologies moving from the research arena to commercialisation are exciting beef producers. 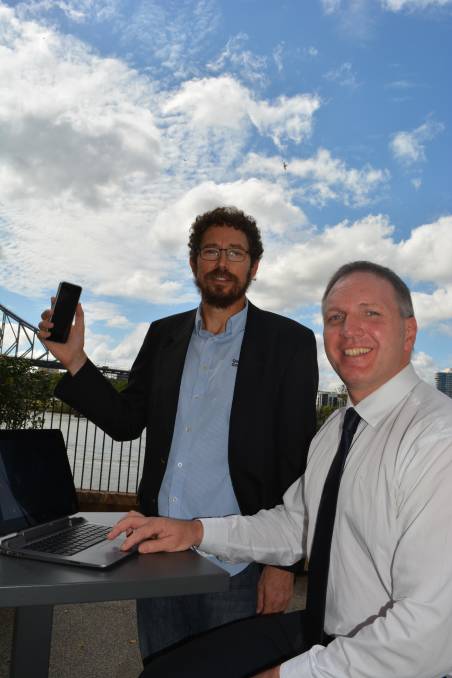 UP to a month of saved labour time a year, liveweight gains of three per cent annually due to better utilisation of pastures and the doubling of carrying capacity via better infrastructure design.

These are some of the hard dollar values that have been put on the use of spatial information in the grazing industry.

The NRM Spacial Hub, a new web-based tool that improves on-farm management and investment decisions by tapping into the world’s latest mapping and imagery technology, was one of several new beef industry innovations put under the spotlight at a Meat and Livestock Australia (MLA) breakfast in Brisbane this month.

Technologies on the verge of moving from the research arena to commercial reality were showcased.

Spatial information is the digital connection between location, people and activities. It can graphically illustrate what is happening - where, how and why - to show the insight and impact of the past, the present and the likely future.

Phil Tickle, from the CRC for Spatial Information (CRCSI), an international research and development centre in Victoria, said the Hub was a national initiative delivering online mapping, analysis and monitoring capabilities to Australia’s extensive grazing industry.

“It is becoming clear we have to start to join technologies up in the beef industry and the Spatial Hub is one way of doing that,” he said.

“It gives a producer the ability to look at 30 years of data in about 30 seconds.

“Terabytes of data are at your fingertips.”

After a two-year development phase, the Hub, through CRCSI and the Australian Rangelands NRM Alliance, has now partnered with Australian Wool Innovation and MLA to move into commercial development.

Today there are 500 properties in the system but the new phase is expected to see double that number involved within a year and tens of thousands of users over time.

Both the Spatial Hub and VegeMachine were touted as a way producers could ‘start to really deal with issues of social licence to operate.’

“Producers will be in a much better position to demonstrate stewardship,” Mr Tickle said.

“It allows you to assess the performance of an investment in, say, total grazing pressure fencing or biodiversity projects.

“You can look at how a property is performing under current seasonal conditions compared to averages - it gives a producer the ability to set their own baseline.

“It allows you to answer questions like whether you should be backing stocking rates off or whether parts of your country be worked harder.”

The technology also provides the ability to run an asset register and depreciation schedule for property valuation - something that can be taken to the bank.

WHILE the spatial hub has a broader set of tools for mapping rural properties, the VegMachine website focuses on detailed ground cover analysis for grazing enterprises.

Users can see how their cover has changed, benchmark it against local conditions and relate it to their past management decisions.

Rangeland scientist with the Queensland Department of Agriculture and Fisheries at Rockhampton, Dr Terry Beutel, said ground cover was an important indicator of productivity for beef operations.

There were 60,000-plus ground cover images for Queensland with 700 ground cover measurements at any point for more than 95 per cent of the state, he said.

“The data behind VegMachine is world-leading, and the VegMachine.net website is the simple, free, and anonymous doorway to that data for producers,” he said.

“In particular, the VegMachine forage report, which only requires paddock mapping, returns a comprehensive paddock-by-paddock property monitoring report within about 15 minutes.” 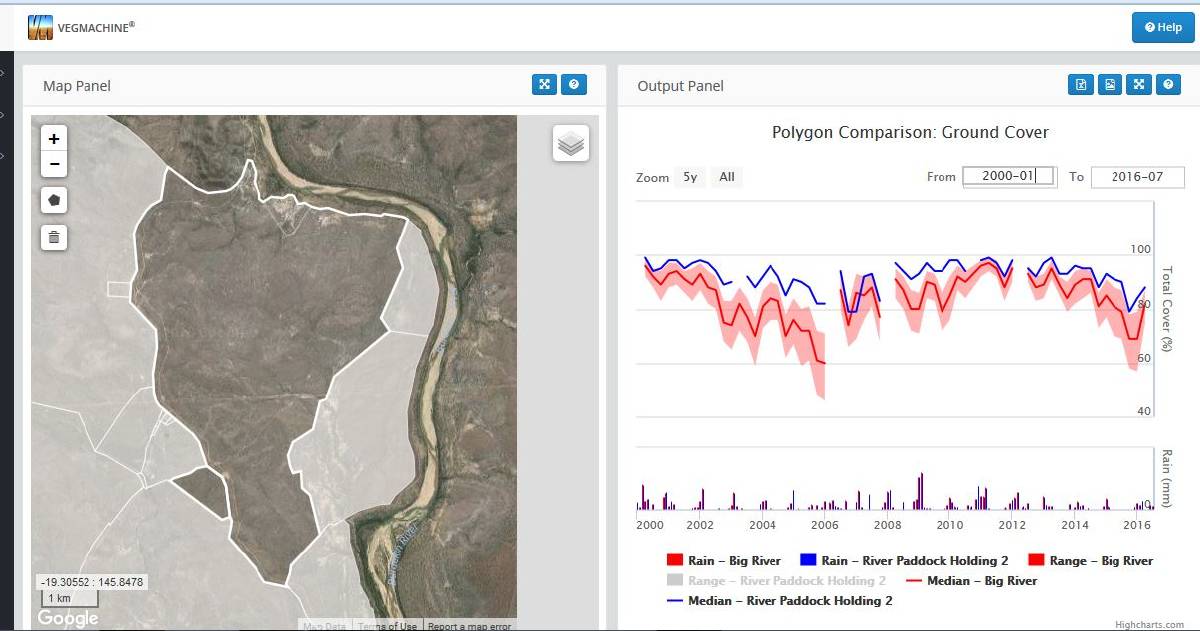 VegMachine.net compares ground cover in two adjacent grazing paddocks. The red and blue lines indicate average ground cover in each paddock since 2000. Both paddocks fluctuate up and down with longer term rainfall patterns, but there is also a clear, long standing difference in ground cover levels between the two paddocks.

VegMachine.net is funded by the Fitzroy Basin Association and Australian Government.

Dr Beutel said it was fully operational for Queensland but large parts of the country could access some of its services, and moves were underway to make the forage report available beyond Queensland.

Hundreds of users across northern Australia were now using the website as both a monitoring and learning tool, for leveraging funding and to document progress made through management changes, he said.

“It answers questions like has my land changed and which past management decisions worked for me?” Dr Beutel said.

This paddock changed ownership in 2004. The change of management has improved ground cover dramatically, as shown by the changing symbol colours on the graph (predominantly red symbols prior to 2004, and predominantly white after 2004). This is a good example of how producers can use VegMachine to evaluate the results of their management decisions and demonstrate their land stewardship.

"It can help with decisions around fence and water placement, analysis of grazing pressure, and demonstrate stewardship to stakeholders and markets."