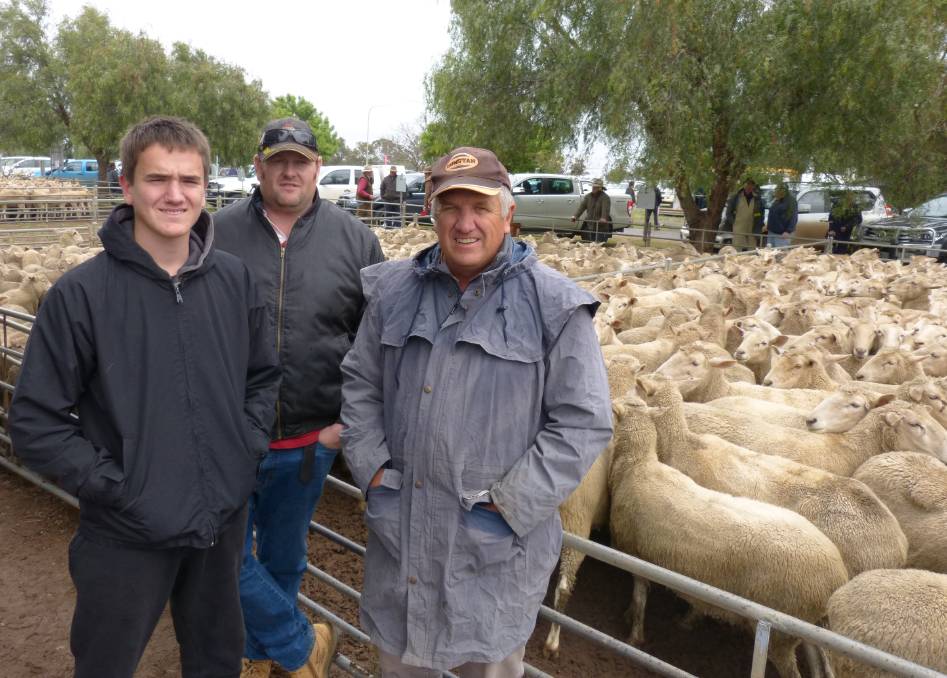 While Elders Wycheproof manager Jim Coffey said a record was expected to be made at the sale due to the scarcity of breeder ewes on the market, the price exceeded expectations.

“The sheep are just not there – the shortage of good sheep is starting to hit home,” Mr Coffey said.

“There aren’t too many excess breeders available because we sold down to our three year-olds last year.

“I think it is about time we had these sorts of peaks and were rewarded for the quality of lamb and mutton we produce.”

Bidders from as far afield as Millicent, SA, Yarrawonga, Vic to Hay, NSW, travelled to compete on breeding ewes as escalating prime lamb, mutton and wool markets support an increase in flock numbers. 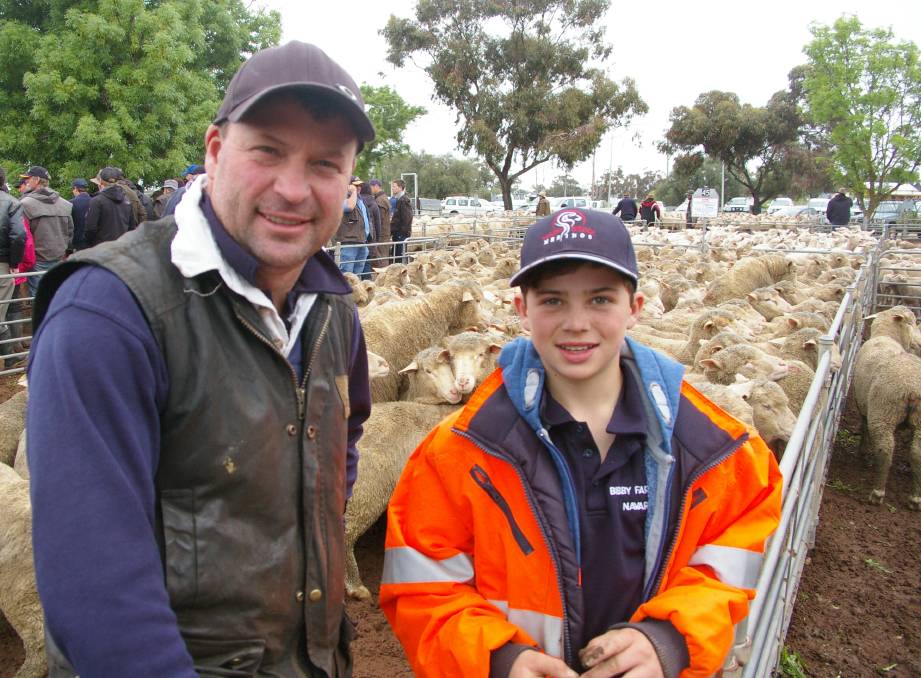 “People are seeing that there is a lot of money to be made owning a well-bred pen of ewes at the moment, whether it is first-cross or Merinos,” Mr Coffey said.

“The biggest and highest prices are being paid by the true sheep man; he is not just deciding now that there is money in sheep.

“This is the bloke that stuck with it and has been paid for his efforts – only the discerning operator will pay the record prices.”

With the country completely saturated and prospects of a bumper season ahead, Mr Coffey said the market had not peaked.

“The country is soaking wet so when it dries we will see the prices kick again,” he said. 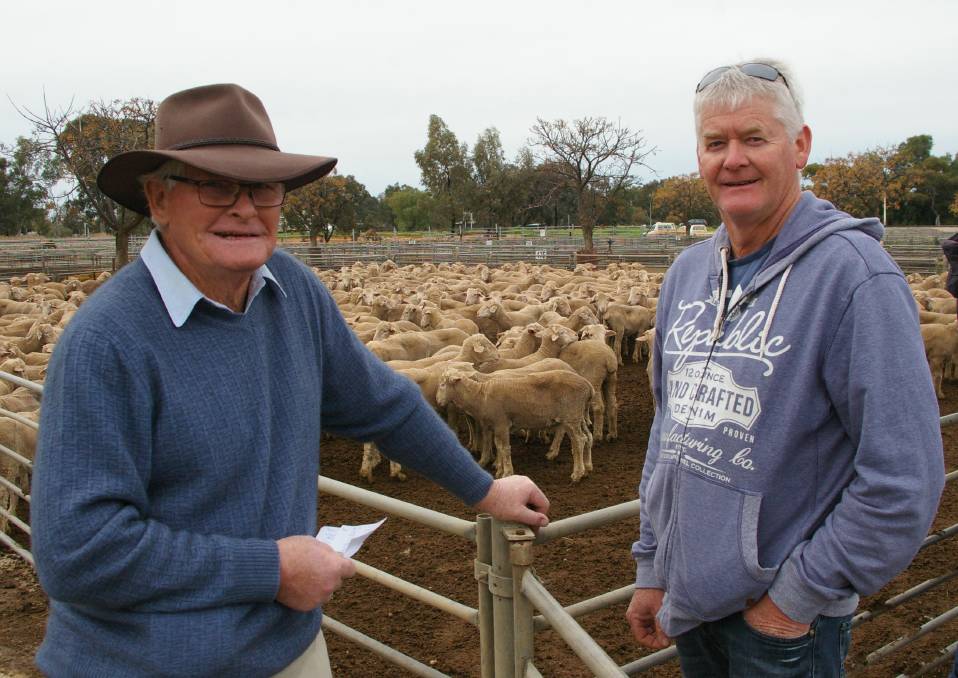 The season’s highest price paid for young maiden ewes was also set at the Wycheproof sale, with a line of unjoined BLM-cross, offered by JG Warne, Culgoa, fetching an impressive $300 per head.

The season has been warming up to these record prices with major demand at the September breeding ewe sales.

“Sheep need to offer high lambing percentages and good wool cut to get a return on this money,” Mr Hoare said.

“Breeding is playing an important role in the market because producers need to know they’re buying a 1.5 year-old that will breed until they are 6-7 year-olds, producing 100 plus lambing percentage.”

He said buyers were wary of chasing large mobs because of making money out of them in the short-term.

“Current prices will become a hurdle for some so the expansion in sheep numbers won’t happen fast; people are buying smaller numbers and breeding their own,” Mr Hoare said. 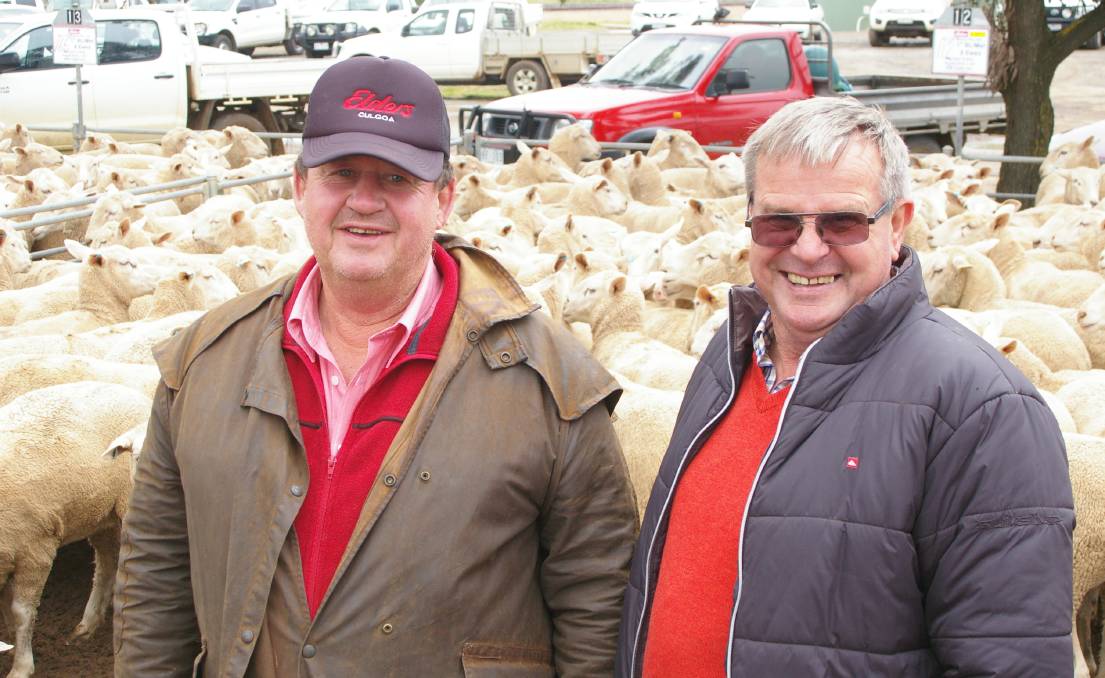 Ian Mudge, Elders and John Warne, both of Culgoa were surprised with their record-breaking $300/head price for BLM-cross young ewes.

Elders auctioneer Jason Andrews, Deniliquin, said these prices can be justified by determining the ewe’s implied unit value of her lambs, wool, skin and meat produced.

“If you have sheep to trade in, these are more than reasonable prices. But if you’re going into the market cold it makes it a big outlay to start with,” Mr Andrews said.

He said with the industry in the thick of a “perfect storm”, more record prices were on the horizon.

“Some of the eastern regions aren’t looking for lambs yet because it is still wet and our southern counterparts are behind in their lambs’ growth so when they enter the market end of October and November things could go off again.

“Off the back of the mutton, lamb and wool prices, and with everything wet and green, we are seeing the perfect storm.”​

“If you’re in the sheep game you have some money in the bank to buy in at these prices, but it is becoming harder for those wanting to come into the game,” Mr Sawyer said.

“The cropping blokes are nibbling around the edges, trying to get into the market, which is helping drive competition.

“This is all underpinned by the amount of feed around the country.”