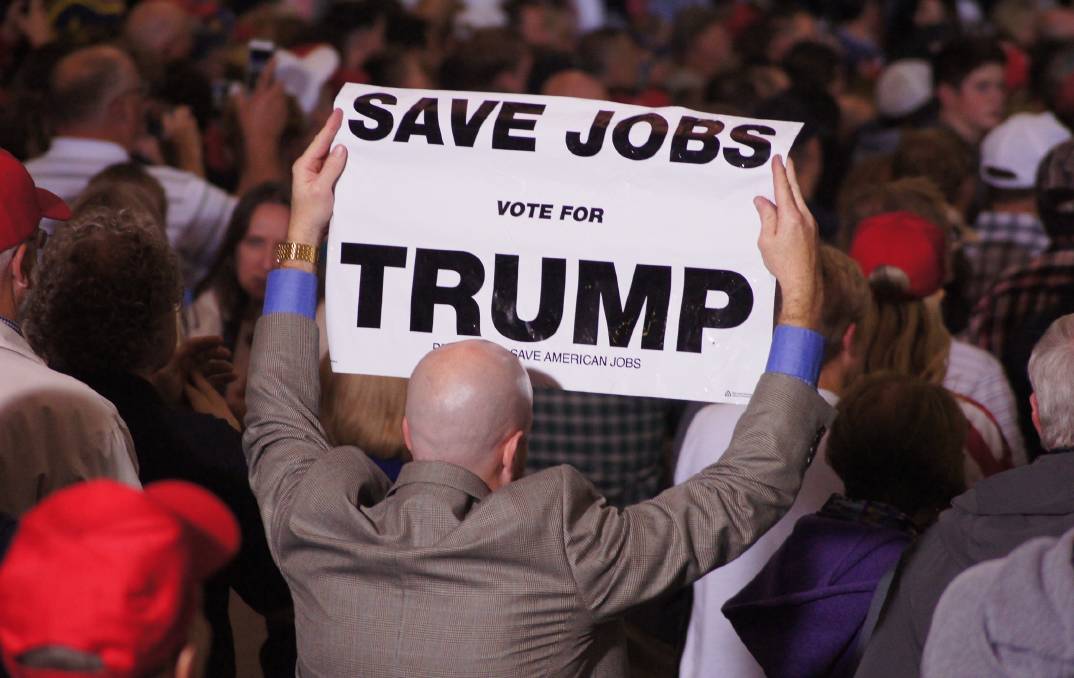 A Trump supporter at a campaign rally in Geneva, Ohio makes his thoughts known.

HAVING spent time in the US leading into this historic presidential election that’s transfixed the globe, and during the emotional protest-fuelled days immediately after the shock result, I’m compelled to share some observations and lived experiences.

HAVING spent time in the US leading into this historic presidential election that’s transfixed the globe, and during the emotional protest-fuelled days immediately after the shock result, I’m compelled to share some observations and lived experiences.

Post-election analysts are now examining every intricate political peculiarity and demographical detail of the 18-month campaign, searching desperately for logical answers as to how mega-rich real estate tycoon Donald Trump overcame extreme odds and unpalatability to be voted-in as the new US President-elect.

Mr Trump easily won the Electoral College vote on November 8, despite being tipped by almost every media outlet and political expert from Baghdad to Brooklyn to lose by a significant margin.

A key to his victory was the Republicans claiming the renewed confidence of socially conservative rural American voters in core battleground states like Michigan, Wisconsin, Ohio and also Pennsylvania.

Mr Trump failed to deliver any real policy substance for the US farm sector to digest.

But he won the hearts and minds of non-metropolitan voters with a solid, hardened message about providing hope and genuine change on core economic issues like lower taxes and smaller government.

Characterising himself as the ultimate political outsider with nothing to lose, he also promised to reform the seemingly corrupt, self-serving and self-perpetuating political system in Washington DC that’s become fat and bloated while working class American families have struggled for a dollar, to stay afloat.

Like Australia, the post-election map highlights an alarming and clear political class divide between rural and urban voters in the US that’s been expanding for decades.

The Washington Post reported that the Democrats won about 90 per cent of urban locations while Mr Trump won a similar number in the rural areas and small cities.

“The Midwest is where Trump redrew the electoral map,” the media outlet reported.

“States like Michigan and Wisconsin were considered favourable to Clinton, but instead swung to Trump mostly due to voters in mid-sized counties outside the major cities.”

For me Hillary Clinton’s “basket of deplorables” comment stands out more than any other moment as a pivotal catalyst on the final result.

It was difficult to understand why the Democratic candidate made her inglorious and not so memorable statement in early September, about Donald Trump supporters being so reprehensible and blameworthy.

For those who need reminding, here’s what Secretary Clinton verbalised publicly during a fundraiser in New York City, about her feelings on the personal qualities of those people standing with her Republican rival.

“You can put half of Trump’s supporters into what I’d call the basket of deplorables -. right?,” she said along with her familiar smug smirk.

“The racist, sexist, homophobic, xenophobic, Islamophobic - you name it.”

Ms Clinton immediately went into damage repair mode saying she regretted making the “grossly generalistic” comments which was also an admission that it probably wasn’t a deliberate, strategic campaign manoeuvre.

But by then it was way too late and an intimate aspect of her true and deeper character was revealed for all to see and help sway any doubters.

The damage was done and her inexplicable fatal own-goal, for someone so vastly experienced in public office and public speaking, could not be unsaid.

Post-election reports say Ms Clinton admitted to one of her political advisers shortly after making the blooper that she knew she’d just “stepped in it”.

If she had of called Donald Trump a deplorable racist, sexist, homophobic, xenophobic Islamophobe or the bastard son of Satan, it would have seemed part of her normal game-plan and viewed as a potentially headline grabbing move.

But to cast such extreme labels on voters - while campaigning from an apparent high moral ground about the need for greater tolerance, unity and understanding of others in the vision of America she was trying to sell - only made her seem like a hypocritical elitist of the kind the Republican campaign was desperately trying to evict from Washington DC.

Resorting to ridiculing those opposing voters was like poking them in the eye and could only have gone one way for Ms Clinton and that was badly.

It also served to galvanize deep-seated opposition from any undecided voters or those possibly looking to abstain from voting at the November 8 poll due to unprecedented mistrust of both candidates.

No doubt it was also a significant free kick that boosted the Trump campaign to go even harder with its attack on Ms Clinton’s alleged links to corruption and duplicity in public office, with a renewed sniff of victory.

Reports say in the end, on polling day, Ms Clinton received less support from key voter demographics like African-Americans, women and millennials than when Democratic President Obama was re-elected in 2012.

Virtually every conversation with local voters while in the US since early September, no matter what their natural political persuasions may have been - from cab drivers to bar tenders or complete strangers to good friends - started with a humble apology of sorts about the quality of the two candidates and the escalating, unsavoury campaign.

That obvious embarrassment was also partnered with various justifications that all basically equalled people saying to me, ‘I don’t like either of them – the red or the blue one – but have no idea where to turn’.

Another repeated statement was, ‘Nobody has the moral high ground at this election”.

Everyone wrestled with their deepest thoughts and feelings about which way to vote, or whether to vote, while watching the train-wreck of a political contest unfolding before them and their children, like a bad soap opera.

People were agonisingly searching for any faint sign of hope or evidence to sway them towards a virtuous choice - but in the end that light never quite appeared.

Many people had switched-off months before polling day and were looking away in agony - hoping it was all just a bad dream - while considering potentially shifting to live in another country, likely Canada or Australia, no matter who won.

Another repetitive theme was that hardly anybody was prepared to admit openly they were actually voting for the Republican candidate or supported anything he stood for.

Backing Donald Trump was like keeping a dirty secret that people were largely unable to admit or verbalise to others and subsequently they were forced to state indecision or just say nothing, to avoid confrontation.

It seemed Ms Clinton had excelled at dehumanising her opponent to such a high degree that it subverted any opportunity to engage in the type of open and robust public policy debate that a functioning democracy requires, like oxygen.

In some social circles, you’d have rather admitted to being a paedophile than to whisper any form of remote appreciation or empathy for Donald Trump.

But of course allegations about his past treatment of women - which was repeatedly ventilated during the campaign to varying degrees of disgust - or a pledge to build a wall between the US and Mexico, made the dehumanisation task so much simpler.

So rather than admitting Republican support, voters waited patiently in silence, like snipers on a secret mission, until Election Day, before making their true voices heard collectively, in the ultimate privacy of the polling booth.

They’ve now sent Donald Trump on a mission to ‘shake things up’ in Washington DC while an overwhelming number of people are forced to deal with unprecedented levels of shock, fear, anger and growing anxiety about what their future holds.

This election has tested friendships and relationships like never before on an intimate level, while the use of social media has certainly helped amplify the angst and antagonism.

Now, everyone is trying to reassemble the political jigsaw based on some form of known or realised political or social logic.

But this was an election that broke any previous rules of engagement and raw voter emotions - not intellect or savvy judgment - played a starring role, like Tom Cruise in Top Gun, in determining the ultimate, final outcome.

Another intriguing aspect of the 2016 US presidential election was the seeming lack of objectivity in describing the ongoing contest from many mainstream media outlets; especially the large television networks.

Commentators were either urging the Clinton team to win, as if their very lives or fabric of being depended on it, but while largely ignoring the obvious criticisms and failings of their chosen candidate, in the process.

Or else they barracked so hard for team Trump with bias and vigour that some even tried to claim the Republican candidate had won each of the three, live televised presidential debates which of course was as absurd as suggesting he’d go on to win and become President.

In terms of the differences between US and Australian elections – and there are many – it was intriguing to observe the barefaced strategic focus during the campaign and in media commentary, on core voter demographics like educated white folks, blacks, Hispanics, educated college graduates, non-educated working-class and gender.

Another thought-provoking difference was the patent focus on the two main political parties and the fortunes and failings of their lead candidates and the lack of viable alternatives to vote for, despite voter loathing for Mr Trump and Ms Clinton.

During the tense, immediate post-election analysis, one of the most compelling statements was made by a pro-Democratic supporter who said his side of politics now needed to move on from attacking its political foes with a form of moral superiority that suggested they were always right and never wrong, and accept the democratic will of the people and come to understand that their political futures should now involve a focus on, ‘less knowing and more learning’.

The deplorables have spoken and like it or not, that’s democracy in action US-style.