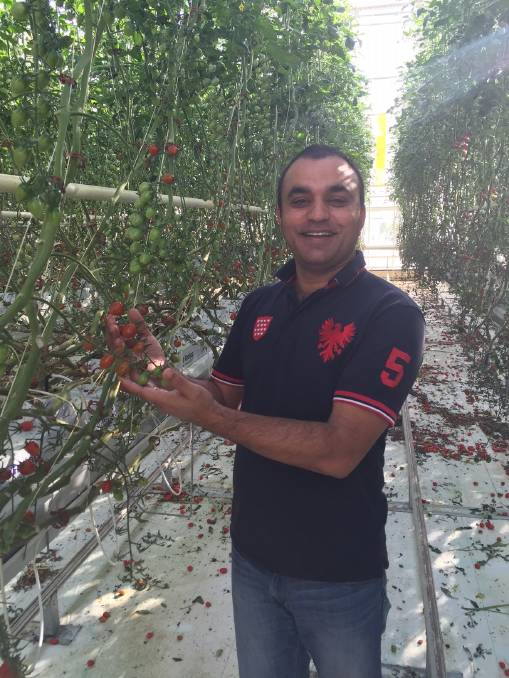 Naresh Singh, head grower with D'VineRipe, has achieved world best yields in a number of varieties of tomatoes.

The regional winner of the SA grower productivity segment of the Syngenta Growth Awards moved to New Zealand from India in the late 1990s with no agricultural experience whatsoever.

After finding work picking and spraying horticulture crops he decided this sector was where his passion lay.

Fast forward less than 20 years and Mr Singh is a world leader in the tomato industry.

As head grower for D’VineRipe he has achieved world best yields in both the Dunne and Perino varieties.

Both varieties are high value varieties, the Dunne similar to a Roma and the Perino a smaller red and yellow fruited cultivar.

For Mr Singh it is all about finding the best fit for his indoor environment.

“The outdoor growers here focus on Truss tomatoes, we are looking at varieties that can’t be produced effectively outdoors.

“These are the range of brown and yellow varieties that we can get a premium for.”

“The market is becoming increasingly discerning.”

D’VineRipe is becoming one of the largest active greenhouse growing facilities in Australia and New Zealand, based out of Virginia, north of Adelaide.

It focuses on varieties that will improve their return on investment through increased shelf life, product flavour and overall quality.

Kumato is a big success story for the business. D’VineRipe has the highest per capita consumption of the high value tomato variety in the world.

As head grower, Mr Singh is constantly trying to push the envelope in terms of productivity, principally by growing yield but also by cutting costs.

Central to his methods has been focusing on increasing the density of plants, achieving a 25pc yield increase in varieties such as Dunne from the accepted European yield rate.

New glasshouse technology is also a key part of the improvements.

“It allows you to control the whole of climate in the houses not just the temperature,” he said.

Input costs such as water and electricity are also closely monitored.

Mr Singh works to optimise his resources through the on-site generation of electricity and efficient reclaimed water system.

The idea behind the boosting electric capacity was borne out of necessity.

“We’re on the edge of Adelaide city and were literally at the end of the line of the electricity grid so we had issues with service.”

“We worked to create our own electricity through natural gas which has been a big help as inconsistent power can be a problem for the glasshouses and lead to decreased tomato yield or quality.”

In terms of water D’VineRipe has implemented a reverse osmosis system which allows them to use reclaimed water from Adelaide.

“We are in a dry area and water is an issue so using reclaimed water makes sense,” Mr Singh said.

Along with that there is also an on-farm water collection system that collects all the rainwater that lands on the glasshouse rooves.

The irrigation system into the glasshouse can help cut fertiliser costs too.

Excess fertiliser is captured through the irrigation system and can be put back into the crop, ensuring best possible fertiliser use efficiency.

Mr Singh will find out on December 1 if he takes out one of the overall Syngenta Growth Awards, with the awards ceremony dinner to be held in Sydney.