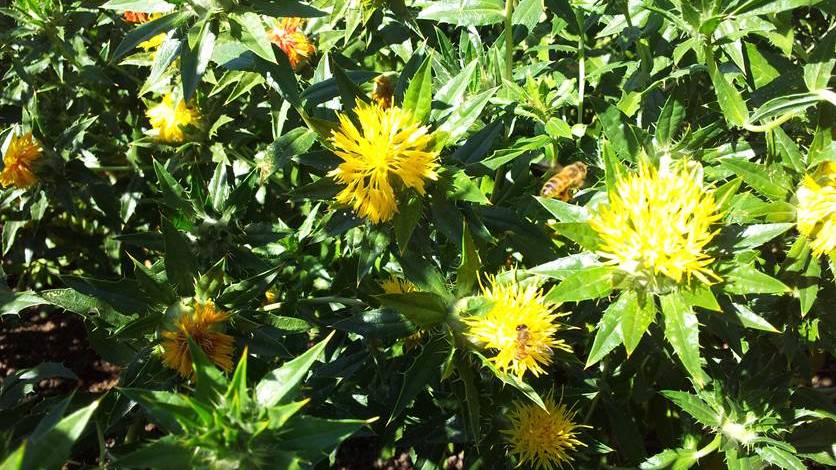 A new safflower variety, developed by CSIRO and the GRDC and commercialised by GO Resources is likely to be available for commercial plantings in 2018.

A new safflower variety with high levels of oleic acid in its oil is likely to be available by 2018.

THE MANAGING director of a company commercialising a safflower variety with unprecedented levels of oleic acid expects the first commercial plantings to take place in July 2018 after another successful trial.

Although not a traditional genetically modification (GM) process, the use of RNAi still requires approval from the Office of the Gene Technology Regulator (OGTR).

Mr Kleinig said the first year’s trials had been conducted successfully, while the second one has now been harvested.

“The crop has been harvested and now will be assessed by the OGTR.

“The process will take about a year, so we are hopeful there will be commercial plantings in 2018.”

The safflower shows signs of being versatile in terms of climatic zones.

“We’ve had trials up on the Liverpool Plains, out at Narrabri and then down through the Riverina and the Wimmera in Victoria,” Mr Kleinig said.

“We expect there will be plantings from the NSW-Qld border right down to the Western District in Victoria.

Although safflower has traditionally been regarded as a spring / summer crop in many regions, Mr Kleinig said the SHOS lines were designed for a late winter plant.

“We’d imagine they would be planted in July in most areas, at the back end of winter crop sowing.”

Trial yields have been good, ranging from 1.5 to 2 tonnes a hectare in dryland conditions to 3t/ha on irrigation.

“We have the crop yielding slightly less than canola, but the product is going to attract a significant premium over canola.

“I think the gross margins are going to stack up well against any crop.”

Mr Kleinig said as part of the commercial roll-out, GO Resources hoped to see 100,000 hectares of the crop planted nationally by 2020.

The end use focus will be on the industrial market.

The oil replicates the use of synthetic oils and lubricants used in industrial applications.

“Because of its profile, the oil needs few additions before it can be used industrially, making it a real alternative to petroleum-based products,” Mr Kleinig said.

Although the industrial market is the primary focus, high oleic oil is also sought after by the food services sector, especially as a stable frying oil with a high burning point.

With this in mind, Mr Kleinig said the company would also look to get Food Standards Australia New Zealand (FSANZ) approval for the product.

The seed generally has an oil level of around 37 per cent, making the meal an important secondary income, the major application being use as a livestock feed.

Mr Kleinig said FSANZ approval was not required for the meal to be fed to animals, but said the company felt it was a worthwhile process to demonstrate to consumers the quality of the product.

In terms of its oleic acid profile, Mr Kleinig said the oil measured at over 92pc, markedly above the nearest rivals in the low 80s.

“It is a fantastic product, and agronomically, safflower also is great, it gives a valuable break from a cereal phase and its long tap root is good at breaking up hard pan layers in the soil.”