Barnaby Joyce has given an impassioned speech to the UN's Food and Agriculture Organisation, urging the adoption of genetic modification (GM) “now”.

A FIRED-UP Barnaby Joyce has given an impassioned speech to the Food and Agriculture Organisation (FAO) of the United Nations, urging the adoption of genetic modification (GM) “now” to help resolve the demanding global food task equation, warning people will die otherwise.

The Australian Agriculture and Water Resources Minister’s rousing talk, given during a trip to Europe to hold talks on a trade deal with the EU and UK, also underlined the need for freer trade in farm products, to resolve the globe’s future food crisis.

“It’s really quite simple – in the next 50 years, the world will have to produce as much food as it has in humanity to this point – that’s pretty awesome,” he said.

Mr Joyce said the FAO’s basic equation is that the planet is now heading towards 10 billion people by 2050 who are also getting richer meaning the quality of food they’re buying and consuming is increasing.

He said not only does the planet need to produce more food in future, but it must be produced at a higher quality and that’s an “exponential drain on global food capacity”.

“In the next 50 years, we have to produce as much food as humanity has consumed to this point and that’s a huge task,” he said.

Mr Joyce’s FAO speech outlined four core points to resolve the crisis – firstly that farmers won’t produce anything unless they get a fair return for effort.

“They have to be paid a decent wage and decent return for the things they produce – it is item number one,” he said.

“If Umbria just traded with Umbria there wouldn’t be much happening.

“Product has to move and people have to play to their strategic advantages if we’re going to make this task work – always push for trade if you want it to prevail.

“Let’s get that trade moving as quickly as possible.”

Mr Joyce said food wastage was “low hanging fruit” that could be done “straight away”.

“We could feed about 250 million people extra a year if we got our storage right, especially in the tropical areas,” he said.

“This is absolutely important.” 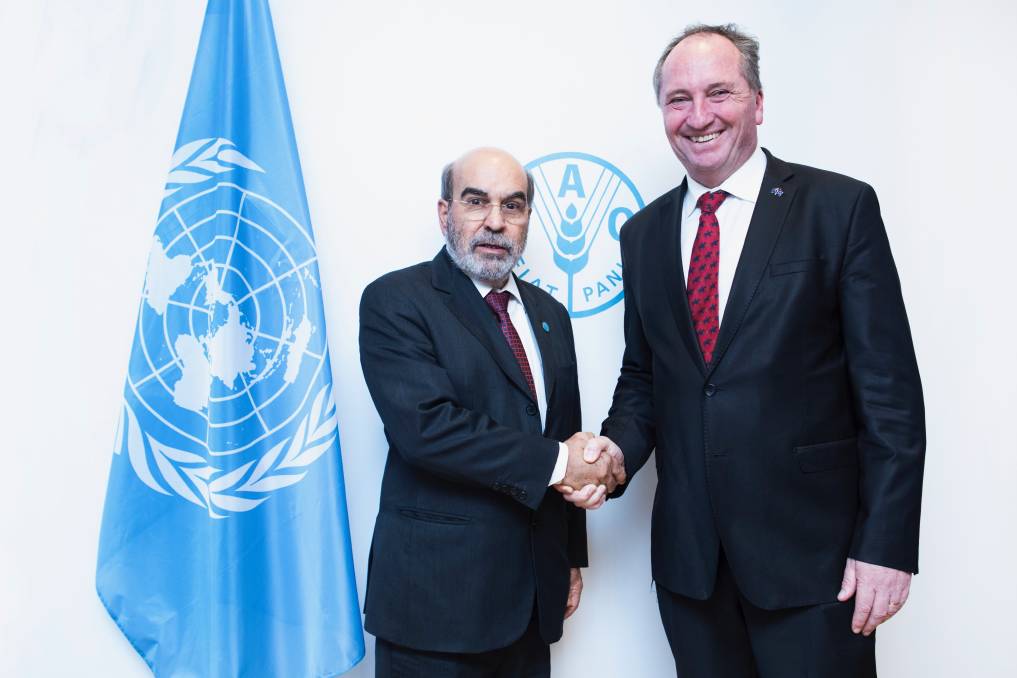 Mr Joyce said innovation was the fourth pillar, referring to Normal Borlaug who led the green revolution from about 1946 to 1963.

He said the famous US agronomist was “instrumental” in increasing wheat trade from Mexico six-fold because he could “see around corners” and was an “iconoclast”.

“We’ve got to try and work out in dealing with this equation and dealing with the fact that by 2050 we’re going to have 10 billion people in the world and in the next 50 years we’ll have to find as much food as we’ve produced to this point now in humanity and we’d better start being prepared to be iconoclast as well and how to deal with these issues,” he said in a subtle dig at Europe’s ideological resistance to using GM crops.

“We can’t just sit in some sort of religious vessel thinking that we can somehow make this all work without actually looking around corners.

“We’re going to have to look at genetic modification – I get very frustrated when people say you shouldn’t.

“Wheat itself – a hexaploid gene – we’ve been mucking about with wheat for about 10,000 years.

“(But) we don’t have another 10,000 years to get to 2050 – we don’t even have another 10 years that Norman Borlaug had in trying to get that increase in wheat for Mexico which he then took into Pakistan and around the world.

“We’ve got to move right now and we’ve got to use the instruments that we have at our disposal – that intellect that resides there at the moment.”

In another veiled swipe, this time at Greenpeace’s destruction of GM crops in Australia in field trials at CSIRO in Canberra in July 2011 which led to a court conviction and fine against two activists, Mr Joyce said “we have to make a stand”.

“If you want to be on the side of the person - as happened in Australia - who goes out and whipper snips the genetic modified wheat crop because they think that’s a form of protest – that’s just another mechanism that’s going to make this equation so much more difficult,” he said.

“We’ve got to be brave enough and be the iconoclast and when these movements come against us and say ‘oh you can’t use that’, you’ve got to be aware that we’re not going to make this equation work.”

Mr Joyce said scientific crop modification techniques like gene splicing were already underway in research and could create an “exponential jump” in food production, giving an example of plants like wheat merging with sugar cane.

“And if that plants is nitrogen fixating it will also help you as well,” he said.

Mr Joyce also urged the room of global political representatives to elevate the status of agriculture within the power structures of their governments.

“Ask yourself – where’s agriculture in your cabinet?” he said.

“These are the sort of questions you must take back to your countries.”

Mr Joyce said the global food task had to be seen as “an honourable and just cause”.

“There is nothing more honourable than feeding and clothing people,” he said.

“As Deputy Prime Minister of Australia I had a choice of any portfolio and I chose this portfolio because it is imperative we get this calculation right.”

“If you’re agronomy practices stand still you just won’t get the yields,” he said.

“This is stating the bleating obvious to people off the land but it needs to be stated, but what we have to start looking at is the capacity for genetic modification so this global food task of feeding 10 billion people is achievable because we don’t have the time that they had for instance in the green revolution – we’ve got to do this now.”