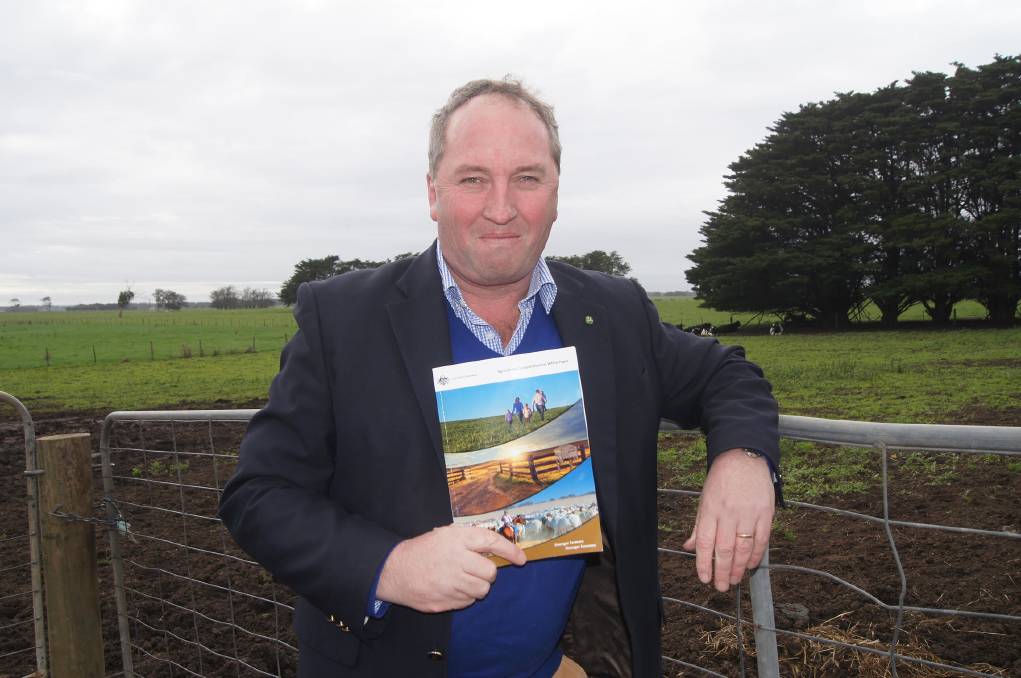 Barnaby Joyce says the Coalition’s Agricultural Competitiveness White Paper is “one of the most decisive moves in agricultural policy in history”.

FEDERAL Agriculture and Water Resources Minister Barnaby Joyce has claimed the Coalition’s Agricultural Competitiveness White Paper as “one of the most decisive moves in agricultural policy in history”.

The federal government’s first ever White Paper was released almost two years ago to the day on July 4, by Mr Joyce and then Prime Minister Tony Abbott, on a dairy farm near Warrnambool in Victoria.

After battling Liberal colleagues to win significant funding for various farm policy initiatives, Mr Joyce has continued to push the $4 billion program and also retained his portfolio to bolster that case, despite elevation to his party’s leadership in early 2016.

“What the Labor called a hotchpotch of policy thought bubbles has turned into one of the most extensive documents and it’s been part of one of the biggest turnarounds in agricultural production in our nation’s history,” he said this week two years after the White Paper’s release.

“Where do you see that?

“Drive around northern NSW and have a look at the new grain sheds going up by reason of our write-off for grain storage over three years.

“Have a look at the water infrastructure that people are rolling out knowing they get a 100 per cent tax deduction.

“Have a look at the Farm Management Deposits going up to $800,000 and the money that’s been invested into them.

“Have a look at the dams’ policy that we’re rolling out and the applications that are coming in for that.

“Have a look at the country of original labelling that’s now rolling out onto the food sold in our supermarkets.

“And have a look at the fact that the money used to refurbish biosecurity and the success we’ve had in stopping two major diseases – Panama race 4 and now white spot.”

Mr Joyce also cited the $250 million per year over 11 years allocated in the White Paper towards concessional loans that are now part of the soon to be established Regional Investment Corporation.

He said he was proud of the White Paper; despite criticism of others.

“It’s one of the most decisive moves in agricultural policy in history,” he said.

“I can’t think of a time where more has happened, in agriculture, at least since I’ve been watching politics, than has happened under us in terms of government policy, major investment and being part of and assistance to one of the biggest turnarounds in agricultural fortunes in our nation’s history.

“There’s also the further investment in the ACCC (Australian Competition and Consumer Commission) to deal with issues like the dairy crisis and Mick Keogh’s (Agricultural Commissioner) involvement.”

The White Paper was a core election commitment by the Coalition from opposition originally championed by former Shadow Agriculture Minister John Cobb heading into the 2013 federal election, but landed about six months later than originally mooted.

It contained a range of policy initiatives including; $500m for building new dams and water infrastructure to boost agricultural production; $100m to extend the Rural R&D for Profit Program to 2021–22; and $11.4m to improve the ACCC’s agricultural expertise by appointing Mr Keogh as the new Agricultural Commissioner and implementing a new enforcement and engagement unit.

Shadow Agriculture Minister Joel Fitzgibbon has been one of the White Paper’s biggest critics highlighting areas where it has struggled to make an impact like funding for grants to try and assist with the establishment of a multi-peril crop insurance scheme.

He has also attacked Mr Joyce for cutting the Rural R&D for Profit program that was first announced in the 2013 federal election campaign as a $100m program but given an additional $100m in the White Paper, through to 2021–22.

The total funding available for the program has been slashed to $180.5m since those announcements.

The spokesperson said the Abbott-Turnbull government had four years to address regulatory issues in the agriculture sector which should have been part of the White Paper process.

“It’s past time Barnaby Joyce set his populist rhetoric aside to tackle the serious issues holding the agriculture sector back.”