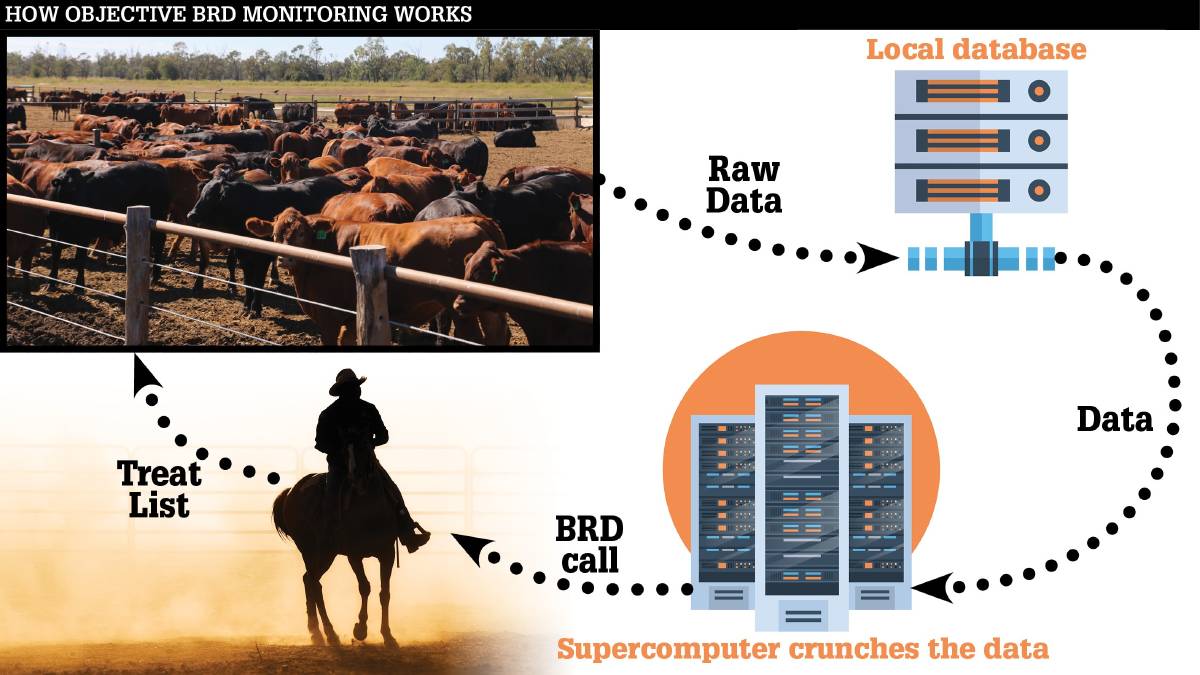 Wearable technology being applied to the feedlot world.

QUICK movers in Australia’s beef industry have latched onto advanced methods of earlier and more precise detection of disease in feedlot cattle and are fast working the science up to commercialisation.

Key to what could well be a massive breakthrough in the battle against bovine respiratory disease (BRD), the most common cause of illness and death in cattle in Australian feedlots, is wearable technology.

Trials being held in southern Australian feedlots putting to the test a United States-developed concept of remotely and objectively monitoring behavioural changes in feedlot cattle are looking closely at adoption considerations such as accuracy validation and cost per head.

He said some of the applications of wearable technology in the human world, such as in elderly care where problems can be picked up far earlier, could be adapted to the feedlot world.

“We have some very highly skilled people involved and even though that is supported with a lot of data and knowledge of risk factors, it is still very subjective,” Dr Batterham said.

“It’s labour intensive and we also have to do continual training.

“Accuracy, as verified by plant results, shows that 32 per cent of the time we call something not sick when it actually is.

“On flip side, 28pc of the time we have called something sick when it is not.”

As for confirmed diagnosis in the feedlot, the instruments are blunt.

Thermometers are point-in-time measures and temperature can be associated with other conditions, electronic stethoscopes have not proven very accurate and laboratory tests are wonderful but definitely not pen level stuff.

The REDI system, developed by US veterinarian Dr Brad White of Kansas State University and Precision Animal Solutions, has been shown in trials to pull cattle .7 to 1 day ahead of observers. Accuracy level is up, specifically in the area of removing false positives. Where REDI identified a sick animal, 93pc of the time it was.

The system works by continuously monitoring cattle and then combining aspects of feeding frequency, changes in activity patterns and social interactions to generate an accurate, early determination of disease status. Wearable technology - in this case ear tags - measure behaviours that correlates to sickness, that raw data is crunched in a supercomputer which works it through an algorithm, figures out whether the animal is sick or not and comes back to server on site with a report each morning listing all sick animals.

This year a Meat and Livestock Australia-run project with government and grainfed levies is looking to validate those trial results on a larger scale in a commercial setting in Australia.

Along with accuracy and determining a cost per head, the project is looking at server processing capability, device integrity and environmental hardiness and, of course, connectivity.

Trials involving 8300 head, split into conventional groups using pen riders and REDI groups, are being conducted in two feedlots, with the results expected next year.

“This experiment is not just about identifying sick animals but to measure every other production variable all the way to the abattoir to see how the system stands up,” Dr Batterham said.

REDI would not take the place of pen riders, he said.

“They’ll still need to go an pull the animal but it’s about the identification of the disease,” he said.