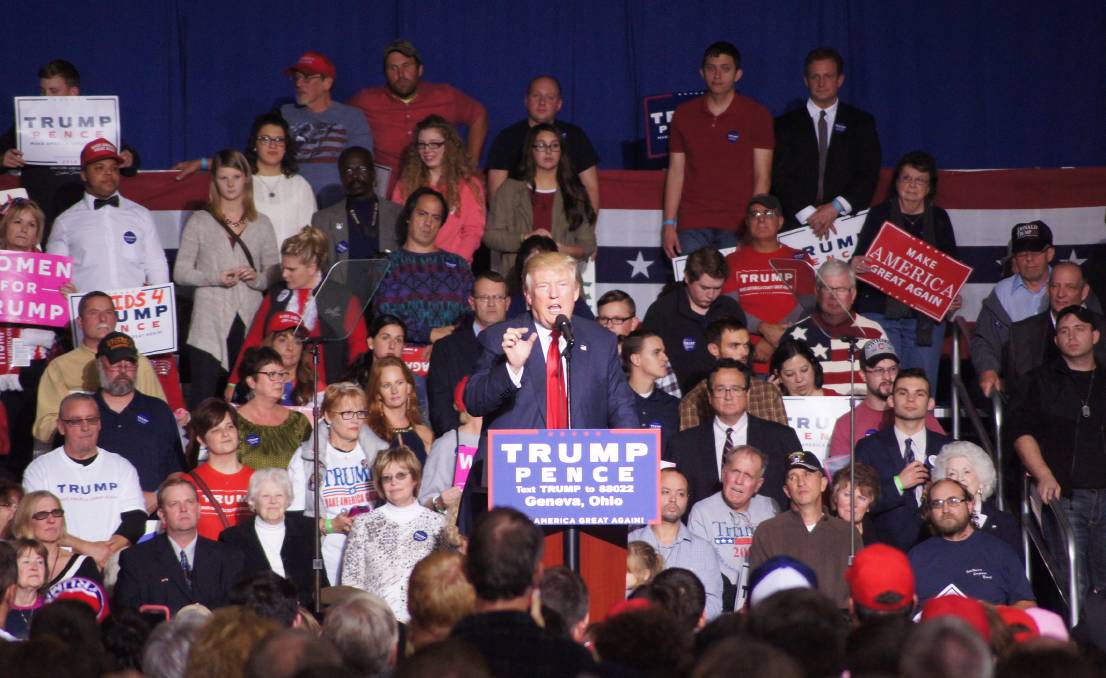 US President Donald Trump was seen as the great hope for the US rust-belt when elected but now seems to be the enemy of farmers, due to protectionist trade measures.

FARMERS have launched a counter-attack against President Donald Trump’s protectionist trade policies, with US agriculture in the prime firing-line of retaliation over new tariffs imposed on steel and aluminium imports.

Farmers for Free Trade (FFT) which claims to be supported by thousands of farmers and agricultural businesses and leading representative groups like the American Farm Bureau says more than 20 per cent of US farm income comes from agricultural exports.

In one clip, Ms Erickson-Jones says many rural US families were optimistic about economic growth under President Trump.

But patience is now wearing thin and she says there is mounting concerns among US farmers about trade policies that would reduce access to the export markets they depend on.

Today we launched an ad that calls on @realDonaldTrump to protect free trade policies that support American farmers. It features @bigskyfarmher & notes economic optimism, but concerns remain among farmers about trade policies & exports they depend on. https://t.co/PGDwAL9DTj

FFT is also launching a ‘Voice of the Farmer’ campaign that will allow US farmers to record a similar type of video clip expressing support for trade and to call on their lawmakers to work with President Trump to maintain and expand export opportunities for American agriculture.

“Farmers are increasingly worried about what they are seeing from Washington DC on trade,” said FFT Co-Chair and former Montana Senator Max Baucus.

“When the US engages in a tit-for-tat fight with our trading partners, farmers pay the price.

“While we need tough trade enforcement, we need to be smart about avoiding global trade fights that hurt American agriculture.”

FFT Co-Chair and former Indiana Senator Richard Lugar said escalating trade tensions would invite retaliation targeted at US farmers and would also raise the price of agricultural equipment and inputs.

“We are working to ensure that American farmers are making their voices heard so that we avoid a trade war,” he said.

FFT said President Trump’s most recent trade move - to impose a 25pc tax on imported steel and a 10pc on imported aluminium - would “cause retaliation that will come out of the pockets of American farmers”.

“History shows that these types of tariff fights escalate with our trading partners and result in farmers paying the price in the form of higher tariffs on the products we export,” it said.

“While we need tough trade enforcement, we need to be smart about avoiding global trade fights that hurt American agriculture.

“In the weeks and months ahead, Farmers for Free Trade will be leading the fight to show the harmful impacts of these tariffs for our farmers and rural communities.”

Other groups expressed concerns about the impact of the steel and aluminium tariffs on critical export markets like China which have already signalled a retaliatory move on soybean imports and impacts on the North American Free Trade Agreement (NAFTA).

President Trump’s withdrawal of the US from the 12 nation Trans Pacific Partnership (TPP), that will see other countries like Australia gain an advantage in exports to beef into places like Japan and Vietnam, has also been pilloried by farmers.

Global Farmer Network board member and north central Iowa corn and soybean farmer Bill Horan said President Trump’s new tariffs on steel and aluminium imports would hurt his farm and were counterproductive to the interests of farmers.

“These tariffs will raise the price of farm machinery and almost certainly spark a trade war that no one can win — especially not farmers like me, who depend on exports for our livelihood,” he said in a strongly worded opinion article.

“As if the stakes weren’t high enough already, Trump raised them even higher when he linked the new tariffs to NAFTA renegotiations.

“While Mexico and Canada have been excluded for the time being from the broad tariffs, that exemption is contingent on the signing of a ‘new and fair NAFTA agreement’. 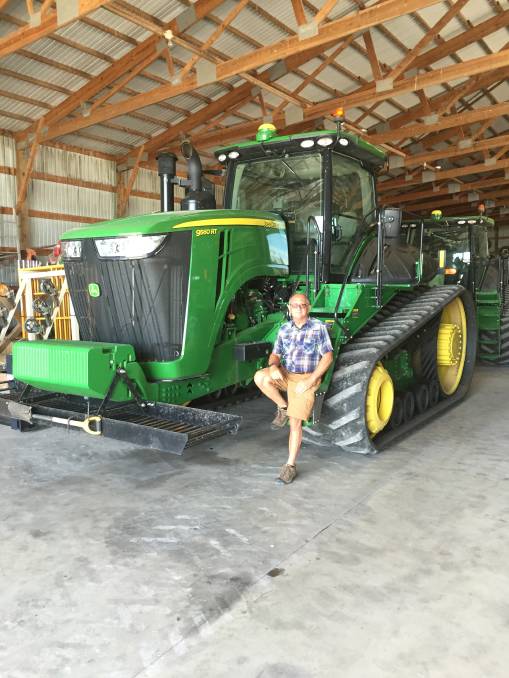 “Perhaps the president’s actions will encourage other countries to come to the negotiating table and compromise, allowing goods and services to flow across borders with less interference.

“That’s an ongoing goal for US farmers: more access to export markets.

“The optimist in me says that we’ll soon see concrete victories.

“We’ve never had a New York street fighter like Trump on our side.

“Perhaps he’ll help us make NAFTA and other trade agreements even better.

“The realist in me, however, worries about a much different result.

“Here in farm country, these tariffs will sting.”

Mr Horan said the tariffs would do “real harm to agriculture” as trading partners retaliate against the US and “that’s what happens in trade wars”.

“When one side imposes new tariffs, the other side responds with tariffs of its own — often in completely different economic areas,” he said.

“Consider the case of Chinese tires.

“President Obama limited their access to the US market in 2009.

“China hit back with new restrictions on American chicken exports.

“Early signs suggest that in this new conflict, China may target sorghum, a grain grown in Kansas and elsewhere.

“There’s no clear connection between tires and chickens or steel and sorghum, except that the Chinese think that punishing American agriculture will capture the attention of US politicians and persuade them to change their policies.”

But Mr Horan said the latest dispute wasn’t mainly about China - the new steel and aluminium tariffs angered a long list of countries, including neighbouring allies like Canada, Mexico, and South Korea which were all important customers of US farm products.

“Several have already threatened to retaliate,” he said.

“Their choice of targets will be both economic and political as they devise new trade barriers, probably on the crops and meat that come from the president’s political base in swing states of the American heartland.

“Out here in farm country, we’re worried about the tariffs and NAFTA.

“History shows that nobody wins a trade war.

“Instead, both sides suffer as they escalate their disputes and block economic cooperation — and the suffering in the United States will hit all of us — but the worst may take place among us farmers.”

The US Wheat Associates (USW) and the National Association of Wheat Growers (NAWG) said they were “extremely disappointed” in the decision announced on March 1 to impose sweeping tariffs on imports of steel and aluminium.

In a statement, the two national farmer representative bodies said they had repeatedly warned that the risks of retaliation and the precedent set by such a policy have serious potential consequences for agriculture.

“It is dismaying that the voices of farmers and many other industries were ignored in favour of an industry that is already among the most protected in the country,” a statement said.

NAWG President and Oklahoma wheat farmer Jimmy Musick said “at such an economically hard time for wheat growers, we do not want to see trade barriers brought against us from some of our top customers who are impacted by this decision”.

“Wheat farmers battling a market in which China holds almost 50pc of world ending wheat stocks can sympathise with steel and aluminium workers on the economic effects of Chinese policies leading to global oversupply - however, we hope that our legitimate concerns with this action are heard and taken into consideration in this process,” he said.

Washington Grain Commission Chair, wheat farmer and USW Director Gary Baily said if the US stayed outside of the TPP, the impact on trade with the Japan market would see a phased in US$65 per tonne tariff reduction for participating countries, US market share for wheat would fall from 50pc to about 23pc, and a reduction of baseline futures prices of US$0.50 at a time when prices are already depressed.

“I have been raising wheat in Eastern Washington for almost 30 years and have seen wheat fall victim to political whims several times,” he said.

“Looking back, however, I have not been as anxious about the future of our industry since the financial crisis of the 1980s.

“The divisive nature of the NAFTA negotiations and the conclusion of the above mentioned TPP trade treaty without the US cause concern about the long-term health of our profession.

“This is especially true for young farmers who may not have the equity or financial backing to weather these storms.

“Adding to the current trade environment is President Trump’s announcement that tariffs on steel and aluminium imports are being considered.

“The effects of those tariffs have yet to be quantified.

“If enacted, agriculture exports will likely be targeted for retaliation.

“It is time for the President to consider the ramifications of his proposed tariffs and acknowledge the positive contributions that our industry has for trade, and re-engage in TPP.”

USW and NAWG have also written to the Trump administration highlighting that re-joining the TPP would help save the valuable Japanese market for US wheat farmers.

“Once TPP is ratified, US wheat exports to Japan will be at serious risk,” the letter says.

“TPP will reduce the effective tariffs that Japanese flour millers pay for imported Australian and Canadian wheat over nine years from about US$150 to about US$85 per tonne.

“Effective tariffs on imported US wheat would remain at about US$150 per tonne.

“Loss in market share and its negative effect on farmgate prices are likely to come much sooner, as Japanese millers reformulate their product mix to avoid the need to purchase artificially expensive US wheat.