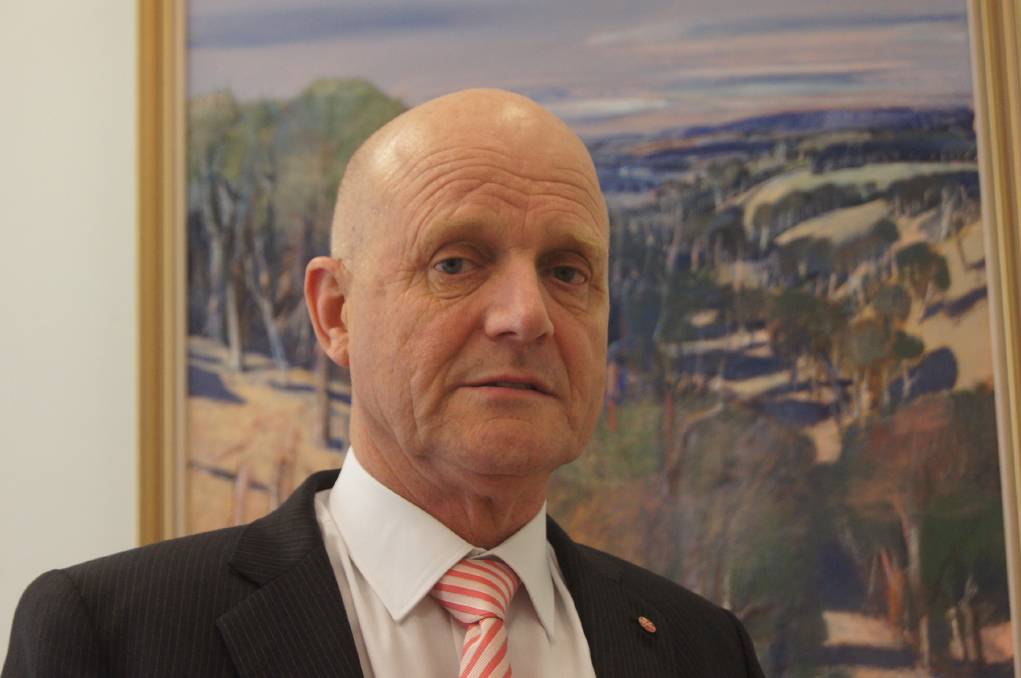 DAVID Leyonhjelm has maintained his push to introduce new agricultural levy-payer databases, to enhance the level of transparency and accountability for billions of dollars in rural research and development spending.

The NSW Liberal Democratic Senator pressed for current answers on the progress of a pilot program to establish new databases when he fired questions at Grains Research and Development Corporation (GRDC) CEO Dr Steve Jefferies, at recent Senate estimates hearings in Canberra.

“I understand that GRDC is acting as the trailblazer on the levy payer database issue,” Senator Leyonhjelm said of his perennial issue.

But Dr Jefferies said “I don't think we can take credit for being the trailblazer here” with the Department of Agriculture and Water Resources “taking the lead” on the development of levy payer databases.

“The most recent update to that is that the Department, with our supporters, has undertaken a pilot study,” he said.

“That pilot study is to look at the feasibility of….using the current Department's levy collection system and how it could be adapted to form a levy payers’ register.

“The Department has engaged seven or eight major grain traders in Australia to trial whether the Department's levy collection system, with some adaptation, innovation and modification embedded in it, could be used to do it.

“I think the pilot study…was successful and showed that, with some further work that could happen.

“My understanding is that the people in the Department are confident that by July of this year we'll have a working grains levy database register up and working.”

Dr Jefferies said the GRDC had been advising the Department on how the data base could work by using a consultant, formerly with the National Grower Register, who had experience in managing grower records and using “secure systems”.

An ABARES report released in September last year estimated that total funding for rural R&D in Australia had increased from $2.3 billion in 2005-6 to $3b in 2014-15.

In that final year, $316 million was spent on extension activities. 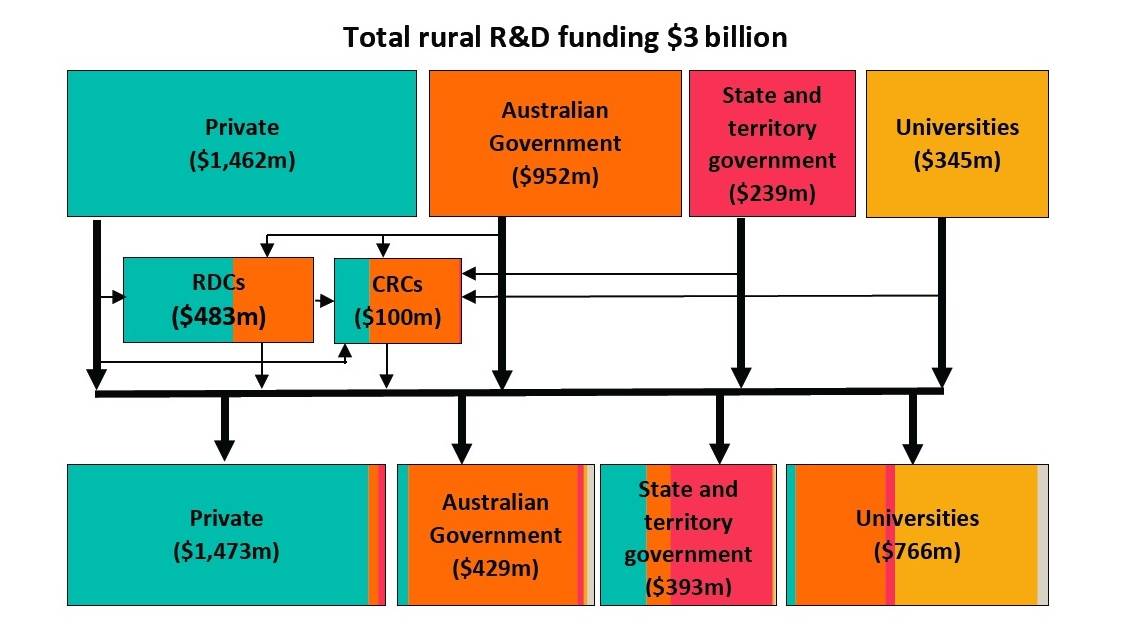 Of that $3b total, $483m was provided by rural RDCs and $952m from the federal government.

But Senator Leyonhjelm has been pushing for greater accountability of RDCs spending since his election in 2013, believing levy-paying growers are being denied democratic influence in major commodities like grains where the GRDC board is ultimately appointed by the Agriculture Minister, instead of via a grower vote.

Agricultural Policy Division First Assistant Secretary Joann Wilkie said the GRDC levy payer register should be operational from July 1 - but if other RDCs wanted a register set up, they’d only become “operationalised” following a request to the minister and the secretary.

“They wouldn't be immediately ready to go,” she said.

“The pilot that we've just done with the Grains RDC, which finished at the end of last year, was to check the technical specifications of that database to be able to essentially get the information out then in a useable format.

“So the business FABs and the IT area in the department at the moment are currently putting some changes through to the database and the IT system to enable, from July 1, the register to go live in a technical sense.”

Senator Leyonhjelm asked if the GRDC could potentially become “genuinely democratic” and hold a poll of levy-payers, like Australian Wool Innovation does every three years, which includes asking if they wanted a zero levy option.

Dr Jefferies said that hadn’t been GRDC’s “primary motivation” for supporting the levy register database but it was “feasible” it could happen.

“If we were alarmed by the attitude of levy payers towards the levy then maybe we would consider that,” he said while saying there was 80 to 85 per cent positive support for the levy, based on recent survey feedback.

Dr Jefferies said GRDC’s “primary driver” for being involved in the pilot program and setting up a levy-payer register was to better inform the researcher’s RD&E strategy.

He said it would enable them to understand “who our growers are and the scale of their operation and their cropping enterprises” and to better target GRDC investment strategies, to meet the needs of levy payers.

“That is the primary objective: to understand who they are,” he said.

“It is still to be resolved - the fine detail of what is going to be feasible from a privacy point of view, and in terms of what information flows.

“But we will be able to ascertain the size and scale of individual growers, in terms of what levies they're paying and what crop enterprise mix they are using, and better inform our decision-making.”

Ms Wilkie said GRDC could access information for grains levy payers and use it to communicate with them directly.

But she said privacy issues currently existed around third-party access: for example if an industry representative body (like Grain Producers Australia or GrainGrowers) or Plant Health Australia wanted to access the levy payer register.

However, Ms Wilkie said if representative bodies were contemplating a change in the levy, they could use the register as a way of communicating with levy payers to seek support, or not, to change the levy rate.

“Plant Health Australia might want to use that information to be able to communicate with levy payers around biosecurity issues, for example,” she said.

“We have guidelines being put in place and are making some amendments to allow conditional third-party access to those registers.”

Dr Jefferies said the databases could also be used to target specific communications and extension strategies to growers, in areas like agronomy, technology change or adoption decisions, taking into account their “specific enterprise mix and/or scale of operations, or where they are located”.

Dr Jeffries conceded to Senator Leyonhjelm the databases would also provide more opportunity to ask levy payers for their views on management matters, or to vote on specific issues, which had previously been difficult.

“I hear more complaints about lack of consultation from grain growers than any other sector,” the Senator said to GRDC.

Industry owned model for GRDC also on offer for growers

Continuing the accountability theme, Department Secretary Darryl Quinlivan said successive governments had been “fairly receptive” to approaches from the industry to use an industry-owned company (IOC) model and AWI was an example of that structure.

“In those cases the boards are able to have a wider range of decision-making authorities than the model that GRDC currently operates under,” he said when asked about the level of ‘democracy’ levy-payers have within RDCs management models.

“If the government, in this particular context, was getting feedback that there was widespread industry preference for a different way of delivering R&D, I think it would be quite receptive to hearing those views from the industry and supporting a transition to an industry-owned model.

“But I don't think we're hearing that at present - not that we've been out seeking that, of course.”

Growers have however called for GRDC to become an IOC.

Dr Jeffries said there’d been a lot of media about levy payer accountability of the RDCs and whether it could be better.

“It is possible that it could be better and that's where the register could play a big part in essentially making that sort of process going forward a lot tighter and more informed,” he said.

“Our consultation process to date started with our regional panels and our board and then moved on to our representative organisations and then to grower groups and to the broader grower trade.

“People don't vote for every decision - they vote for a broader paradigm strategy.

“With us, I think we can find that sweet spot where we can get the best direction from our levy payers, without asking them (for feedback) on every single investment priority.

“We have 900 different projects and they're moving all the time, so we have to be able to find that sweet spot where we can get the best interaction as well as run an efficient and effective return on investment to our stakeholders.”

Dr Jeffries said GRDC also conducted a lot of grower survey activity, which comes at a cost and was all outsourced.

He said it was “feasible” that the grower register could alleviate some of that cost, but “we've not done those numbers”.

Ms Wilkie said grains was chosen for the levy data base pilot program because it wasn’t like other commodities such as cotton, which had a single levy and would've been “quite easy” to test and set up.

She said at the other end of the spectrum, horticulture had dozens of different levies and different levy points and was “quite difficult to set up”.

“It has let us work through some of the bugs,” she said of the grains levy database pilot program.

“Some of the other RDCs where it's a single levy will be reasonably simple in comparison; some others will be slightly more difficult.”