Beef volumes in US freezers declines. 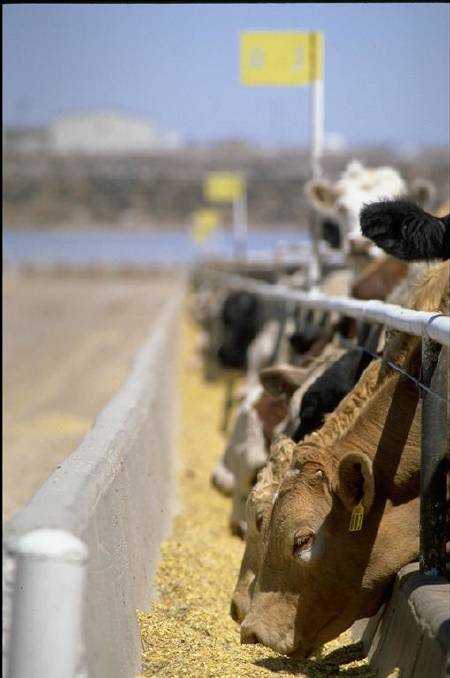 Numbers of cattle on feed in the US are high - how will that play out for Australian beef exports?

AN unexpected drop in United States beef stocks is fuelling speculation that demand in that country may be even healthier than thought and able to offer decent support to Australian processor margins without cow prices easing.

International agribusiness media reports say the latest figures have beef volumes in US freezers in February at 460.3m pounds, down 41.5m, or 8.3 per cent, from January.

Rabobank senior analyst Angus Gidley-Baird said that figure was well below the 500m of February 2017 and slightly below the five-year average of 480m.

Against a backdrop of US beef production increases to the tune of 4pc last year and a forecast 5pc again this year, it’s a strong sign that demand growth is keeping pace.

However, decreased stocks is a factor of both domestic demand growth and export growth and it is difficult to ascertain which is the dominant pull, analysts explained.

The 90CL (chemical lean) price, the key beef export price benchmark for Australian exporters, has been flatlining for the past six weeks at 600 cents per kilogram.

Analysts say that is also a very encouraging sign, given the extra US cattle supply.

“The 90CL is tracking along the same path as last year and at the end of the day, 2017 was a good year as an import price for us,” Mr Gidley-Baird said.

Meat and Livestock Australia analysts said limited overseas supplies and strong competition from Asian markets had supported imported beef prices in the US.

However, higher US cattle slaughter should bolster domestic supplies and apply pressure to prices in the coming months.

MLA global market analyst Adam Cheetham said the cold stores story could be an indication end users were happy to deplete inventories ahead of an expected spike in supply in April and May.

Supporting that was the fact US cattle futures were declining sharply due to concerns around a backlog of cattle coming online in June and July, he said.

Fed cattle contracts for April and May have dropped close to 10pc during the past four weeks.

US cattle on feed supplies as of March 1 reflect the largest on-feed inventory in more than ten years, according to MLA.

Cattle going on feed earlier, which is what has happened in the US, does not necessarily equate to increased carcase weights, however the situation is ongoing low feed prices, and declining beef prices, which would support putting more weight on cattle, Mr Gidley-Baird said.

“If the US is producing heavier animals, that lends itself to the argument they will need more lean product (which is what Australia supplies),” he said.

“On the other hand, however, if the dry conditions large parts of US cattle country is currently experiencing continues, come July they might start to offload greater numbers.” 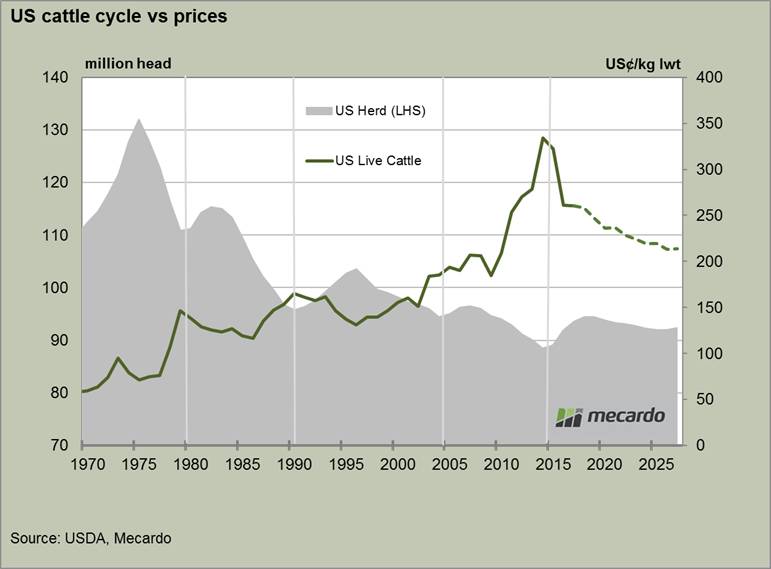 Mecardo analysts report the US Department of Agriculture has revised projections for the US herd size, pointing to an earlier peak during the 2018/19 season, rather than in 2020.

The US live cattle price forecast out to 2025 has been revised down by 7.5pc as well, said Mecardo’s Matt Dalgleish.

That means forecasts are now going against what historic patterns suggest, making for very interesting dynamics in the US.

“What happens in the US is so critical to us because they are both a big importer and a big competitor,” Mr Dalgleish explained.

A strong long-term correlation exists between indices like the Eastern Young Cattle Indicator (EYCI) and the 90CL.

“That the 90CL has held is good news for us - it will limit how far the EYCI can come off,” Mr Dalgleish said.

Meanwhile, reports coming out of the US seem to confirm demand is exceeding expectations, driven largely by increased incomes, and is only likely to creep up in coming months as “grilling season” campaigns kick in.