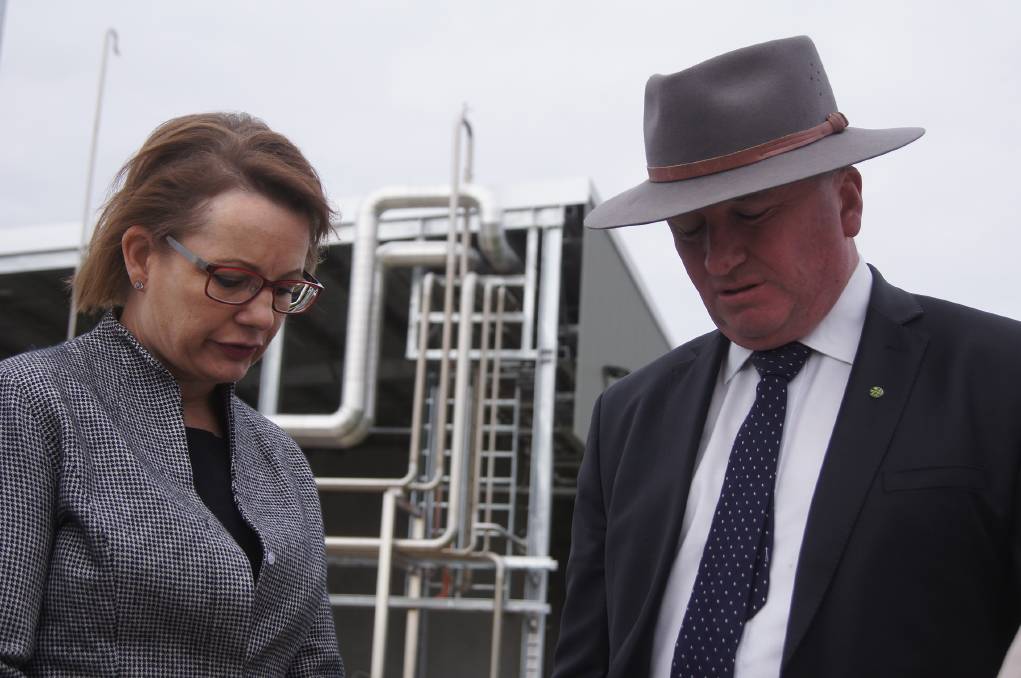 Enough is enough with these ships of shame. Saying other countries would be worse is a lazy non argument.
Time for these monsters to face prosecution.
Time to pick a date by which all live sheep exports must end. We can work with industry and farmers to make this happen. https://t.co/pA1lzxTOv4

“Enough is enough with these ships of shame,” she said.

“Saying other countries would be worse is a lazy non argument.

“Time for these monsters to face prosecution.

“Time to pick a date by which all live sheep exports must end.

“We can work with industry and farmers to make this happen.”

It’s understood Ms Ley has also made similar comments reflecting her views in other media today.

Agriculture and Water Resources Minister David Littleproud has been contacted for comment.

Ahead of the 60 Minutes broadcast, the rookie minister promised there would be no ‘knee-jerk’ response to the latest live exports controversy but has ordered a new investigation into a 2017 voyage involving Emanuel Exports where 2400 sheep died, due to the broadcast of the video footage, and pledged to take stronger action including imposing tougher sanctions on exporters found to be in breach of regulations.

He said only an immediate transition away from live exports would “stop the needless suffering experienced by thousands of innocent animals”.

“We’ve had enough reviews into this horrific industry,” he said.

“We don't need more reviews, we need an immediate transition away from live exports.

“This footage and reports of the mass death of over two thousand sheep on a live export ship in August are just the latest examples to become public of the cruelty, suffering and death this industry inflicts on animals each year.

“When you see the footage of these poor creatures being tortured for profit, it is clear that there is simply no justification for allowing this to continue.”

Ms Ley told Fairfax Media her views were sparked by frustrations with exporters involving live sheep shipments to the Middle East which dated back to an incident in 2003 during former PM John Howard and then Agriculture Minister Warren Truss’ era, involving the Cormo Express.

That shipment was rejected by its intended market Saudi Arabia and left stranded at sea for an extended period resulting in thousands of sheep deaths, triggering a parliamentary inquiry that led to implementation of some reforms.

“We have been promised since then – so the entire time I’ve been a member of parliament I’ve been listening to these promises and I’ve heard enough and I actually don’t trust the exporters,” she said.

“It seems the supply chain will always produce these types of events because the industry’s had too many chances to clean up its act and I don’t even know if it’s possible to clean up their act.

“Australia won’t be able to hold its ‘head high’ in the international community on a range of rural issues if we continue our live sheep export trade to the Middle East, for a variety of reasons.

“I’m pleased with the steps that the Agriculture Minister has taken and they’re good sensible steps (in response to 60 Minutes broadcast) but I would go further by setting a date by which we announce, with industry, with farmers, not cutting anyone off at the knees in terms of their business enterprise and their investments - doing it properly - that we will actually be a country that doesn’t have live exports anymore.”

In 2017, Australia’s live sheep exports, of close to 2 million head, reached $249 million but that only represents about 10pc of total sheep and sheepmeat exports value in aggregate.

However, WA is the nation’s largest exporter of live sheep accounting for more than 85pc of the total volume.

“I think perhaps we could look at restricting shipments in the July through September period for vessels that don't have the most up to date ventilation systems,” he said.

“Incidents like this put the entire trade at risk - we need to act expeditiously to ensure that it doesn't happen again.”

Mr Littleproud told media yesterday - in announcing a response that included an investigation into his own Department’s handling of live exports as the industry’s regulator – that there was also a Bill before parliament that doubles, in many cases, the penalties imposed on exporters.

“Because we cannot have the case where we have company directors hiding behind companies, or shell companies for that matter, in terms of shirking their responsibilities and their accountability when they've done wrong.”

Ms Ley has not yet spoken to Mr Littleproud or other Coalition members about her stance.

“This is my view and it’s very much formed from consultations I’ve had with my constituents,” she said, of her Farrer electorate.

“Everyone won’t agree but actually I haven’t found anyone who doesn’t (disagree) so far, from out and about in the electorate.

“I appreciate that everyone won’t necessarily share this opinion but it’s a careful and an honest way forward - but it’s how I see it because I’ve lived this issue for a very, very long time.”

Ms Ley said nobody was more critical than she was of former Prime Minister Julia Gillard’s live cattle ban in 2011 due to issues with abattoir conditions in Indonesia, which was “a slightly different issue”.

But she said “these ships are leaving Australian shores and we can’t abrogate our responsibility as a country to what is clearly been happening for a long, long time on them”.

“The image of farmers, the image of rural Australia and the images of who we are, I don’t want them to be understood as ‘well the city thinks this and the country thinks that’, because that’s not the case.

“I think as a country we need to say we will phase out live exports full stop – not say here there, seasons, up, down (but) pick a point in the future.

“I’m not picking a date – that wouldn’t be fair to farmers who deserve our absolute support.”

However, Ms Ley said she preferred the phase out to be on sheep exports, “at this stage”.

“The issue with cattle exports is quite different because the housing is different but the crowding of the sheep and the animal welfare issues on board the ships are I think seen in a much starker reflection,” she said.

Asked if he supported a summer ban on live export, Opposition leader Bill Shorten told media today Labor would work with the government which had conditions attached, “because I think everyone was shocked and appalled at that footage”.

“There's no way the sheep should've been transported in that condition,” he said.

He said one of Labor’s conditions in working with the government was “this whole issue of animal welfare has been going backwards in the last five years, so they need to step up and be serious about it”.

“Two, we need to have an independent Inspector-General who can be available to deal with all these issues straightaway,” he said.

“Three, it's long overdue to look at how we can value add the meat industry in Australia, rather than to simply live export.

“I know that other politicians have looked at a summer ban.

“We'll work with the government to make sure this doesn't happen again.

“Animal welfare is not a second order issue and I think this government for five years has given the green light to this sort of negligent conduct and we will just see if the government has got the wakeup call which Australians expect them to have heard.”