Irrigation became established before large dams and weirs. Water trusts established large steam-driven pumphouses like this one on the Murray at Cohuna, Victoria.

A bold vision could spring new hope across the Basin

Imagine a lower Murray where tourists and locals can reliably catch and release 20 kilogram Murray cod. Where fish and other aquatic animals thrive in a healthy river.

This is the natural and cultural heritage of the Murray River and restoring it is well within our means. The clincher is that a lot of this can be done with little or no extra water from the Murray Darling Basin Plan.

It has long been believed that the Murray naturally dries to a series of pools during droughts and we see photographs (such as the one in the main picture above, taken in 1923) that seem to prove it, so we believe it. Scientists take one extra, apparently logical step – they say, if the river stops flowing under natural conditions, then the animals living in it must be adapted to these pool-like conditions.

As an aquatic scientist and researcher I have spent much of the past 35 years involved in projects along the river. I’ve spent countless hours standing waist deep in water measuring water flow, counting and identifying fish.  For most of that time this premise, that animals were adapted to pool-like conditions, shaped my thinking.

But 10 years ago I began working with data from a computer model of historical flows, from the Murray Darling Basin Authority, which suggested that even in droughts the river flowed all the time. This was the start of completely reversing my views. 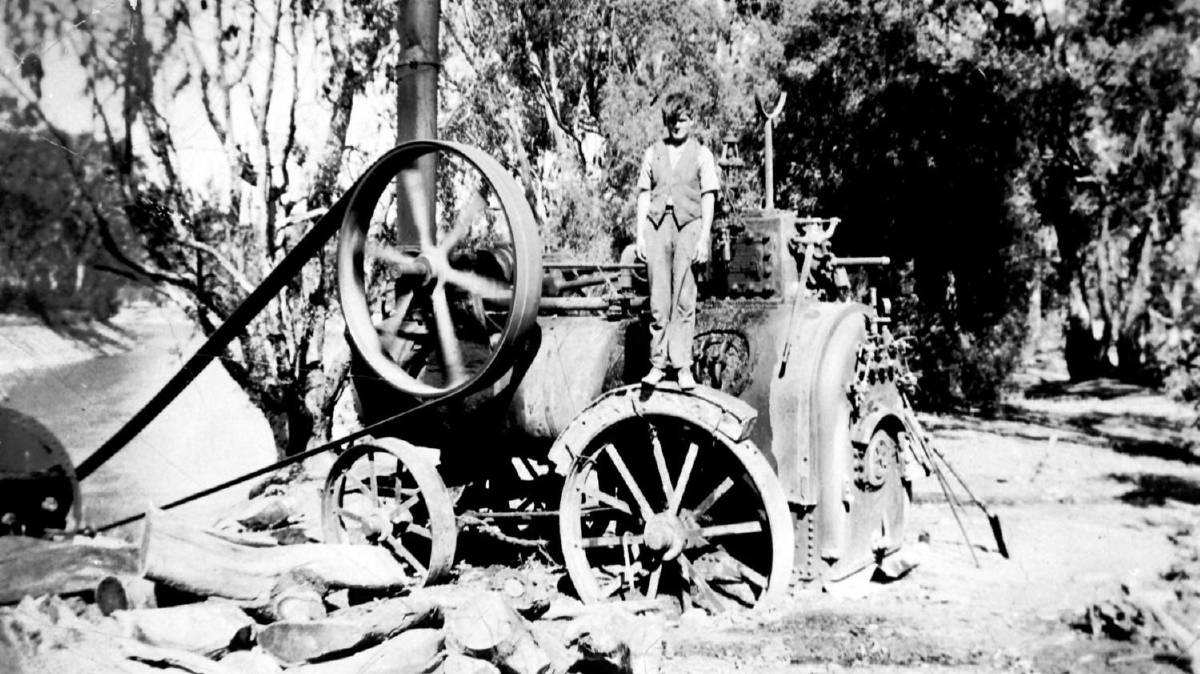 Prior to dams and weirs, steam driven pumps like this one were the main means of diverting water for irrigation.

Computer models are not infallible, so I went back to old photographs to find out their origins, then to early parliamentary reports and 130 year old publications. As I assembled the facts, almost all hard copy from libraries, they kept reinforcing the opposite of what is widely believed. They showed that the Murray River did not stop flowing naturally.

Irrigation was extraordinarily innovative and battled hardship during droughts. Irrigation started with small steam-driven pumps in 1882 in Cohuna, Victoria, which could pump 10 megalitres a day.

Bigger investment led to large engines and pumps and within eight years the famed Chaffey Brothers of Mildura were pumping more than 200ML/day.

Under natural conditions, the Murray River was low in late summer. 1000-2000ML/day flow per day was typical. Diversion by irrigation pumps quickly reached this capacity. In 1889 NSW Parliament reported that pumps on could divert more than 1800ML/day and predicted there could be periods of no flow downstream.

All the photographs and newspaper reports of the Murray River with no flow come from three years (1901,1915 and 1923) and from three locations, and these were all downstream of major irrigation areas that were busy pumping out water during droughts.

The fact that irrigation was the cause of the almost dry river bed we know from photographs was well reported in newspapers and government documents at the time, so much so that in 1915 the governments of the day agreed to a schedule of irrigation pumping so downstream settlements could get water. Sure enough, when they stopped pumping the water out, the river flowed downstream again. It is only with the passage of time that these became known as natural events.

Why is this important? Because the transformation of the Murray from a naturally flowing river to a series of pools has had a catastrophic impact on river health and biodiversity. In the bed of the Murray River in the drought of 1915. No flow was recorded at the time in the middle Murray River at Barham, pictured here.

The lack of flowing water is not a natural condition that fish and other aquatic animals are adapted to.  Those conditions are extreme, possibly once-in-1000 year events.

All early descriptions of the river, reaffirmed by computer modelling, showed that the natural state was to have permanent flowing sections, even in the worst possible drought, with a pulse of flow along the entire river every single spring, which is the heartbeat of the river.

Fast forward to 2017 and much of the Murray River in South Australia and NSW has been relegated to a series of small lakes, rather than a flowing river, simulating extreme one-in-1000 year conditions every day.

These pools are created by weirs that continuously back water up along 700 kilometres of the lower river channel between Mildura and Blanchetown in SA.

The weirs were part of a 1920s program to enable paddle steamers to transport goods up and down the river, but although the steamers were taken over by rail transport, the weirs remained. They now hold back small lakes, or weir-pools, which support houseboat tourism and help pumping for domestic and agricultural water.

The environmental cost of these weir-pools is devastating, but in the discussion of flows and river health, this is overlooked.

Several species of fish, crayfish and snails are extinct in the lower 700km of the Murray. More will follow unless we change something, while there have been massive declines in species such as the Murray cod.

But this environmental disaster also presents a unique opportunity. 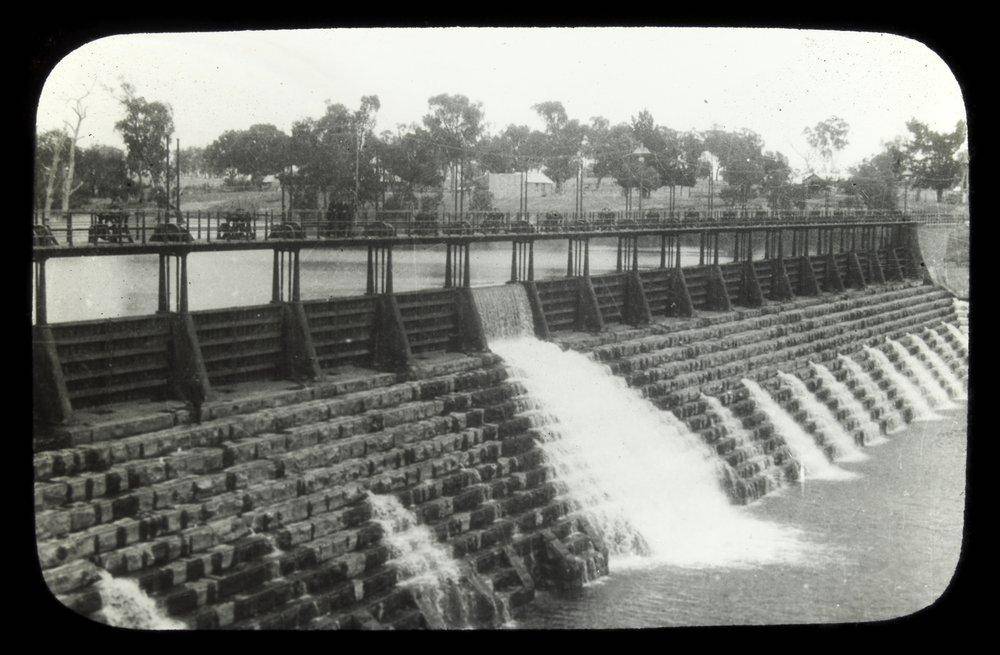 In drought in 1915 the middle Murray had dried up (see picture above), but the Goulburn Weir on the Goulburn River (pictured here) was diverting 500ML a day upstream.

Lowering or removing a weir instantly recreates the flow of the original river. Science from the past decade shows this provides the best chance to restore river ecology, bring back species extinct in SA and increase native fish populations.

Recent work on raising and lowering weir pool levels by small amounts for the environment has been undertaken to benefit the wetland vegetation in floodplains along the river, but these actions do not recreate the flowing river that has been lost, which require a weir to be removed or lowered by a substantial amount.

It is interventions of this magnitude that will be required to meet the environmental objectives of the Basin Plan.

One of the species to benefit most would be Murray cod. These plus-20kg fish thrive in flowing habitats and this would provide a huge opportunity to develop world class recreational fishing and tourism for one of the world’s largest freshwater fish, all while we increase biodiversity and meet Basin Plan objectives.  And with no extra water!

Removing a weir is the same as removing a dam. The lake changes back to a river but the total flow is the same. Water is still needed for floodplains and the estuary, and the Basin Plan is fundamental to achieving this, but changing or removing weirs is a win-win opportunity as it does not require more water.

What are the downsides? Pumps would need to be upgraded and pumping costs would increase because the river is lower. This is solvable but the costs need to be part of a broader project and not fall on industry by default.

Navigation would be reduced, especially for larger boats, so some sites could be prioritised for existing tourism and weirs retained, while others would be prioritised for river recovery and establishing a fishery.  Ultimately, a vision for the lower Murray might include some weirs removed, some only removed seasonally (in the spawning season), while others are retained.

A significant issue is salinity. As the river is lowered it will draw more saline groundwater into the river. This would need to be actively managed and may take several years to reach a natural balance.

Some may also see the weir-pools as water security, but even in the Millennium Drought of 1997-2010 the pools were not needed, as storage security lies in the dams upstream.

This is the natural and cultural heritage of the Murray River and restoring it is well within our means. The clincher is that a lot of this can be done with little or no extra water from the Murray Darling Basin Plan - Martin Mallen-Cooper

Maintaining flowing water habitats is just as important in northern NSW and Queensland, but the context is different. Many of the weirs in these rivers provide critical storage in droughts.

There are more flowing reaches between weirs, and many of these rivers naturally dry to a series of pools.  But periods with no flow now occur more often, and for longer, due to diversions for irrigation and domestic supply.  For many fish species these longer periods increase stress and reduce breeding.  Maintaining more of natural intermittent low flows, and the flowing water habitats these generate, is critical for populations to thrive.

If we can negotiate these issues together, the gain is not only a healthier river with much more aquatic life, but a vibrant irrigation and rural community.

We now know that some fish need flow over hundreds of kilometres to complete their life cycle.  Fish spawned in NSW can mature in SA and end up in Vic. Indeed fish tagged in SA have even migrated to Qld. 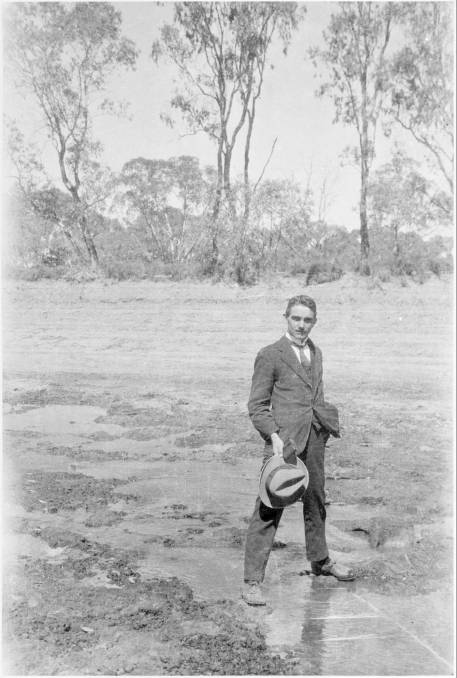 River Murray Commissioner Sir Ronald East standing astride the Murray River in 1923 at Nyah, Victoria. At the time, upstream irrigation was diverting 1000ML/day.

We probably cannot bring back the annual spring pulse along the entire river, especially in droughts, because these flows are captured in upstream dams.

But we should contemplate having a large-scale flow pulse as frequently as possible.

This requires coordination of flows among the states, and it logically calls for decade-long water plans, which include extreme droughts. Ultimately these plans would provide surety to river communities and the industry.

The temporary dams also encourage river managers to think about floodplain sites, rather than long reaches of river. But this view is changing. The Basin Plan needs to include other factors such as reducing the impacts of weir-pools, helping species that need flowing water to recover, and reducing fragmentation of flows.

This should provide huge cause for optimism. Investigating the history and science of the river can show us the value of thinking big. Early irrigation was started by innovation, constantly implementing the latest science and keeping a vision. Implementing the Basin Plan to bring people, environment and industry together requires the same.

Dr Mallen-Cooper is an Adjunct Research Professor at Charles Sturt University. He is an international expert in fish ecology and director of OzFish Unlimited. He has worked for 35 years on the Murray-Darling, other Australian rivers, and the Mekong River.  Much of the work mentioned in this article has been published this week in the scientific journal Ecohydrology.