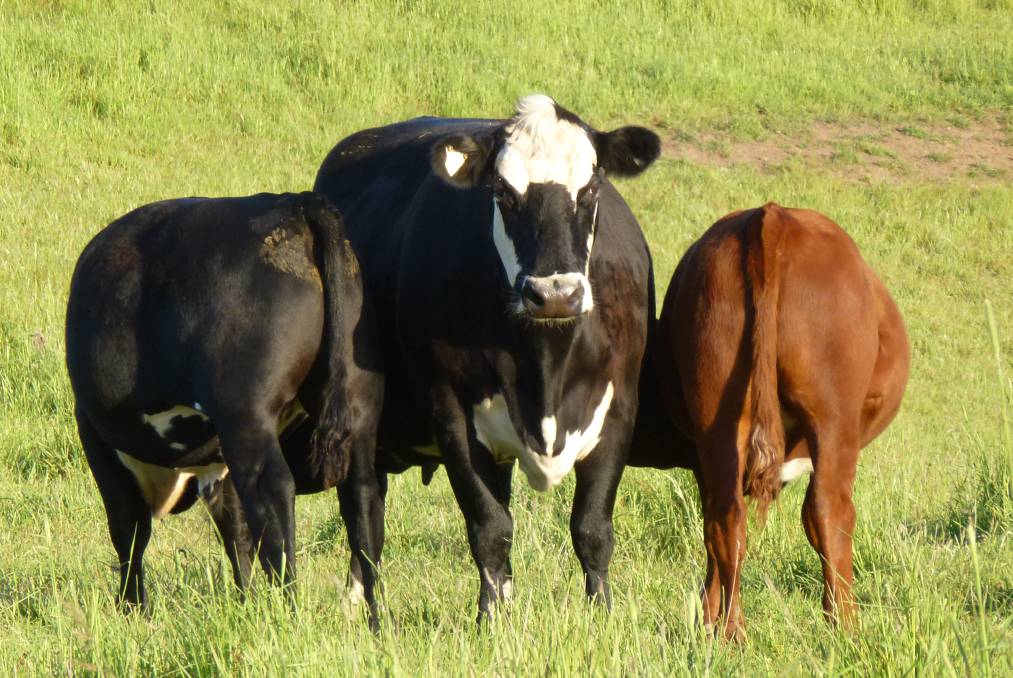 SUPERMUM: A cow with her twins at the Cummins family's Ivanhoe in Western Victoria.

AS the push to lift calving rates intensifies in order to rebuild herds as quickly as possible, the concept of selecting for twinning in beef herds is starting to get airplay.

Pioneer twinner herds now have some solid data showing that where it can be managed, a cow producing two calves can boost output and profitability enormously for little additional cost.

In southern Australia, twinning cows are weaning 60 per cent more calf live weight than cows bearing single calves and that is being achieved consistently without reducing the fertility of the cows when they are rejoined.

For Leo and Liz Cummins’ Invanhoe property at Cavendish in Western Victoria, last year that equated to a difference in $700 worth of calf between single and twinning cows.

Those kind of figures are making producers rethink long held perceptions that twins in beef are too difficult to manage.

Consultants and scientists say twinning has now been established as biologically efficient where more intensive management is possible and a good nutrition regime available.

Former NSW Department of Primary Industries scientists Dr John Wilkins and Dr David Hennessy conducted some of the initial research into beef twinning out of Grafton in the early 1990s.

At the time, the Australian beef industry was looking at developing a vaccine to induce multiple ovulation in cows so there was a need to look at managing twinner herds, Dr Wilkins explained.

The vaccine work was eventually abandoned but the findings from Grafton appear to have been spot on, given the on-the-ground results since achieved in around half a dozen southern Australian twinner herds.

“We found a cow calf system could generate 60pc extra output in calves weaned for just 20 to 30pc extra input to the cow,” Dr Wilkins said.

Asked why selecting for twinning hasn’t taken off in Australia, Dr Wilkins said it was only suitable for very limited management conditions, where nutrition can be controlled throughout the year.

Possibly more pertinent, however, has been an industry perception that it’s not a trait worth pursuing because “twins are trouble.”.

The Cummins believe that comes from the fact that twins typically only occur at a rate of 1-3pc in beef herds and so, because they are unexpected, do often lead to problems. TWINS GALORE: This cow produced six sets of twins in ten years for the Cummins operation Ivanhoe in Victoria.

Dr Cummins, a scientist by trade who specialised in beef and sheep research with Victoria’s Department of Primary Industries at Hamilton until his retirement in 2002, said there were some other things holding back twinner breeding, including freemartins - infertility in females born a twin with a male mate.

“Freemartins are not really an issue because you end up with the same number of potential breeding heifers. There is a very easy way to identify them and ensure they are moved into the slaughter group,” Dr Cummins said.

“They will marble better than steers if you have a setup that delivers that premium.”

Ivanhoe records also show twin-born females get in calf as readily as their single-born mates at 15 months of age.

“The other issue of concern has been twin-born calves have a slightly higher mortality. That means you have to manage the birth process closely.

“Once calves are up and running the system is quite bullet proof.”

Given Victorian farm monitoring projects show the average calving percentage is between 88 and 90pc, the Cummins wonder why anyone would settle for a goal of 90pc calving when 125pc has been achieved in their commercial herd.

They are grading up to a herd of full blood American twinner cows of which just under half are now pregnant with twins.

The composites were a mix of many breeds, with substantial contribution from around 12 including Simmental, Hereford, Angus, Friesian and Pinzgauer.

The Cummins started importing embryos and semen from this herd in 2004 are now breeding their own bulls.

Australia’s handful of twinner herds are all based on MARC genetics.

Evaluations from the MARC herd show single-born females were 24kg heavier at five months and 18kg heavier at 22 months but twin-born steers were only slightly lighter than their single-born counterparts at slaughter and had higher grading scores.

A cow from one of the early embryo importations at Ivanhoe produced six sets of twins in ten years.

“We turn these cattle off to commercial operations at regional Euro weaner sales in January every year, which is two months after our calves are actually weaned,” Dr Cummins said.

“Our heavy groups, which are mainly singles, match the average over the whole yarding and our light groups, mainly twins, are not far behind.”

Over the past five years, Ivanhoe cows have produced 21pc more calves weaned than a comparable beef herd, with singles averaging a 366kg calf sale weight while the cows with twins averaged 615kg.

That’s an increase of 168pc in kilograms and 162pc in dollars.

Over the same period, the weaning weight of the twins has been 86pc that of the singles.

The cows producing twins require 20pc more feed in early lactation but even allowing for this the twinner herd is currently much more efficient than a normal herd, Dr Cummins said.

He believes there is a need ongoing genetic improvement but says the hard work has been done getting to this stage and the advantages are now there for the taking.