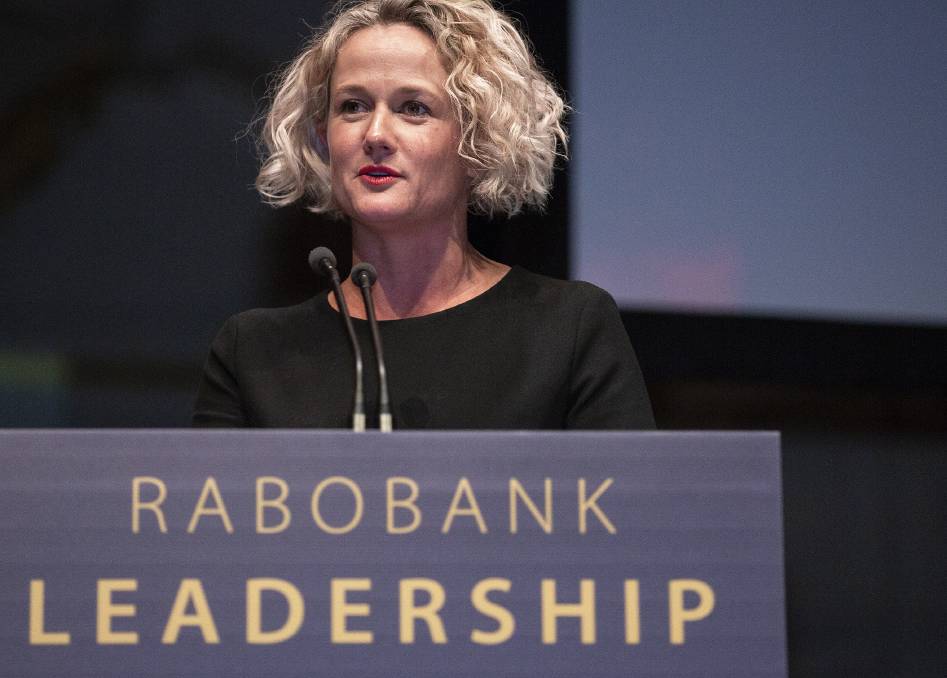 “We have done great things already, but there’s a long way to go, and we need to think big,” she told this week’s Rabobank agribusiness leadership awards dinner after being named 2018 Emerging Leader.

The 36-year-old, who headed AuctionsPlus for four years before recently being poached to become AACo’s pastoral chief operating officer, urged agribusiness bosses and farm leaders to “get out of the box and dream about where our businesses and this industry really want to go”.

Our industry needs to be willing to have the big conversations and really, really listen - Anna Speer, Rabobank's 2018 Emerging Leader

“Change is part of life and it’s naturally scary, but big challenges are changing the face of our industry,” she said.

Aside from seasonal concerns currently testing much of rural Australia, she said digital disruption, farmers’ social licence to operate and developments in biological meat were forcing agriculture to adapt to rapid change “and we need to be brave”.

Farmers and farm leaders from all corners of the industry had to be both teachers and better learners.

“Our industry needs to be willing to have the big conversations and really, really listen,” Ms Speer said.

“We must also do what the heart tells us is right.”

Ms Speer was described as a trailblazer when presented with the award recognising her up-and-coming leadership in the Australian and New Zealand food and agribusiness sectors.

Rabobank’s Australia and NZ group managing director, Peter Knoblanche, said she was a dynamic leader who had notched up a strong track record while at the helm of one of agriculture’s most disruptive marketplaces, the online marketing platform, AuctionsPlus.

AuctionsPlus facilitates the exchange of over $830 million worth of livestock a year.

She was now poised for further leadership growth and success at AACo, Australia’s largest beef producer. Backed by strong and practical knowledge of the ag industry, Ms Speer’s career had seen her work her way up from a ringer in the stock camps to now overseeing 21 pastoral stations and farms, covering one per cent of Australia’s land mass – all in just eight years.

Mr Knoblanche said her authenticity, and belief in herself and others, had seen her build strong credibility as a leader.

However, Ms Speer confided to the 200-strong audience, including many of Australia’s top agribusiness names and achievers, she was often putting on her own brave face as she embraced challenging situations, believing anything was possible –  or at least, “worth giving it a go”.

Her latest job challenge with her 200-year-old employer AACo, had its scary side, too.

“The past couple of months have been a roller coaster ride,” she said, discussing her role managing all facets of AACo’s paddock-to-plate supply chain,” she said.

“One day I’m on top and I can see where we’re meant to be going, the next I’m expecting somebody to tap me on the shoulder and ask what am I really doing here.

“I expect to have some tough conversations within AACo, and the wider industry, about how we can do things better – and we are already doing things better.”

Good leadership means you want to make people better, and take your own ego out of the equation - Anna Speer

She had learnt from her (farmer) grandfather, and a host of other farm industry mentors, good leadership was about being authentic and trusting people.

“You need to want to make people better, and take your own ego out of the equation, getting excited when people grow and achieve,” she said.

Once an “abrupt, passive aggressive” personality, she credited the Australian Rural Leadership Program as a game changer in helping her realise how to understand other people, and herself, and learn to empower and build a team of passionate players.

“I want to assist others in believing they, too, can do great things in our industry, and give them the same opportunities I’ve had,” she said.

“The people in AACo stock camps can see that someone who eight years ago was doing what they’re doing today can go anywhere with the right attitude.

“I also remind them I need them as much as they need me.

“They’re the experts on the ground and play a critical role in the long-term success of AACo.

“Change is the only constant in life, but with a collaborative and brave approach to life, you can go anywhere.”

Ms Speer said her Rabobank Emerging Leader award was a humbling accoladewhich would inspire her to “continue to be brave and do great things in our industry”.