Farm dogs are putting their paws up for climate action today, on AgDay, with the launch of a new social media campaign, #paws4climate.

Launched by Farmers for Climate Action, the campaign highlights the role played man’s best friend as farmers tackle the impacts of climate change.

Farmers and their supporters are encouraged to share pics of their four-legged helpers with the hashtag #paws4climate on Facebook, Instagram and Twitter with a description of how their dog is helping them in the fight for climate action.

The public will then have the opportunity to vote on a selection of the best on the Farmers for Climate Action website, with the top 12 to be featured in the farmer-led movement’s 2019 calendar.

“Farmers are on the frontline of climate change. This means more droughts, more wild and unpredictable weather, making it harder to live on the land,” Ms Morgan-Schmidt said.

“The good news is that they’re not alone. Beside almost every farmer is a climate-smart, ever-loyal farm dog.”

Harden farmer and FCA board member Peter Holding said his farm dogs have helped him through some tough times on farm.

“I’ve been farming for more than 40 years and during this time I have seen enormous changes in the weather. This makes it harder for farmers to plan and adapt, putting even more strain on what is already a difficult job,” Mr Holding said. 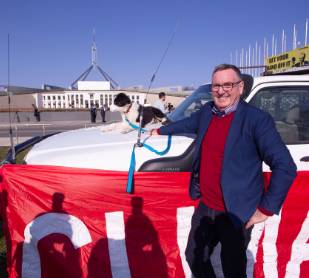 Peter Holding and Dusty at Farmers for Climate Action’s Break the Drought rally in Canberra in September.

“We are currently in the grips of one of the worst droughts I have experienced. Watching your crops fail and having to de-stock the economics of feeding them doesn’t stack up is an incredibly difficult and emotional experience for farmers.

“I know personally the important role your farm dog plays in helping get you through the hardest times. They are loyal and show unwavering companionship, even when you feel as though everything else might be falling apart.

“Dusty, my Border Collie, is quite frankly one of my best mates along with Boots and Jack, the more sensible mature kelpies whose job it is to try and train him! He is with me on farm and is always around for a chat or doing something that he knows he shouldn’t but is usually pretty funny.”

Farmers for Climate Action is a movement of farmers and rural Australian seeking to ensure that farmers, who are on the frontlines of climate change, are a part of the solution.