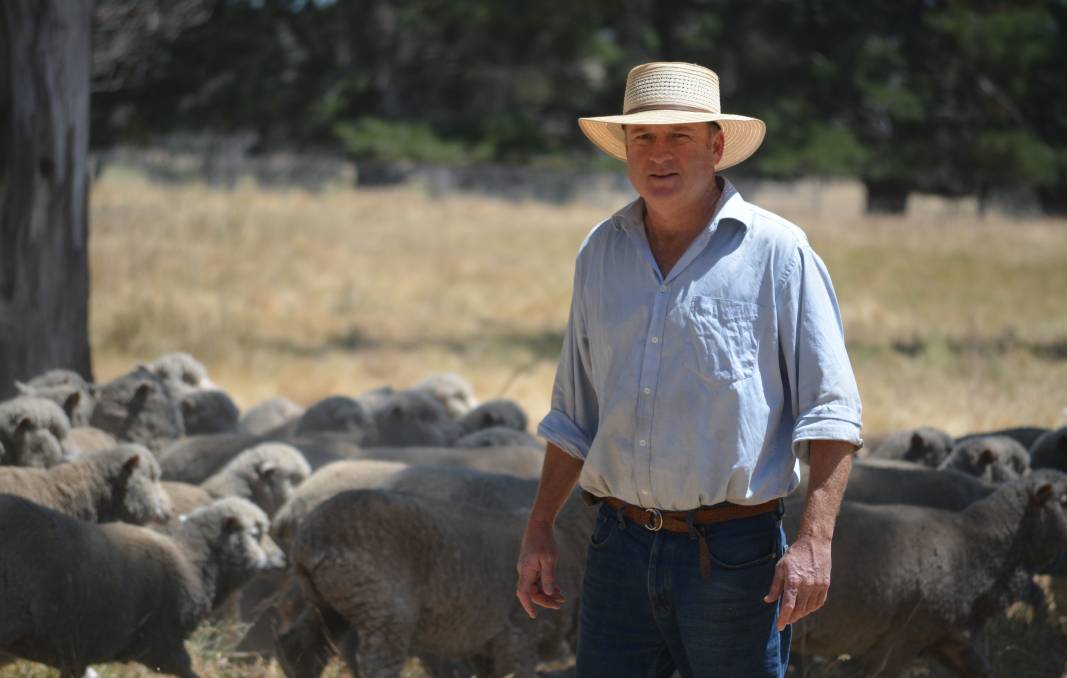 New WoolProducers president says if the industry wants to keep wool at a high value commodity, it has to be prepared to back it up.

To the new president of WoolProducers Australia, wool is one of the world’s the greatest commodities, but it is only as good as the industry says it is.

Ed Storey – sheep farmer with a degree in economics and now president of the peak wool body  – said Australian Merino wool has the best story in the world to tell.

“Wool is the world’s premier natural fibre. The Merino sheep is largely organic and it is largely free range,” Mr Storey said.

“The industry has to be transparent in the marketplace. Wool has a story that is unparalleled to any fibre on the planet and we need to not be afraid to tell it.

Wool has a story that is unparalleled to any fibre on the planet and we need to not be afraid to tell it - Ed Storey, president WoolProducers Australia

“This is why WoolProducers believes every grower selling wool should fill out the national wool declaration (NWD).

“We would also like to see every woolgrower that uses mulesing as their form of breach strike prevention, to use pain relief.”

He said the research from Australian Wool Innovation is pointing to the fact that there are two products that have outcomes over and above the use of one.

But the key piece of research, he said, was that some pain relief provides significant measured benefits for the animal.

“The industry has made big strides in the last 20 years when it comes to the health and welfare of our animals, they are well looked after,” Mr Storey said.

“If the industry wants to keep wool at a high value commodity, we have to be prepared, as woolgrowers, to back it up.”

Managing partner in his family’s self-replacing Merino enterprise just outside of Yass in NSW, Mr Storey oversees a flock of 8000 superfine Merinos.

He has had extensive experience with different institutions and organisations that underpin some of the foundations in the industry.

He sees wool as a prominent industry in Australia, well placed with an extremely bright future.

“It still plays a key role in employment and wealth creation for regional Australia,” he said.

“It underpins much of the sheepmeat market and I think as we have seen at times of drought, sheep are a tremendous low risk form of advancement of your capital in regional Australia.”

But he said sometimes, growers become frustrated with industry organisations.

“The reality is, in the wool industry most of the peak bodies and representative organisations work very well together,” Mr Storey said.

“We must ensure that where there are areas of common ground, all those organisations and institutions that underpin the wool industry, they need to work together and not oppose each other.

“It is for the benefit of the woolgrowers because at the end of the day it is woolgrowers that pretty much pay for all of them.”

He said the industry is made up of a huge number of people with incredible goodwill that are largely all working on the same page.

“It is just from time to time I think growers get frustrated that sometimes some of the decisions aren’t well explained and which leads to confusion,” he said.

According to Mr Storey, the the numbers for a self-replacing Merino flock stack up very well.

His argument consists of not having to buy expensive crossbred ewes, and the ability to breed your own replacements.

“There is a lot of innovation in the wool industry at the moment, on the ground,” Mr Storey said.

“People are getting into the habit of producing excellent Merino lambs with the wether portion of their drop.

“We are seeing consistent figures of wether lambs returning well over $150 in their first 12 months.

He predicts we may struggle to see a large numbers of wethers return to the woolgrowing flock.

“However, as it has been shown in benchmarking trials around the country, wethers still offer an excellent, low risk enterprise, depending on your type of country,” Mr Storey said.

“I think the Merino is an incredibly flexible enterprise and I see no reason, in due course once we get over these current hard times in many wool growing areas, that people won’t return and produce wool growing sheep.”

Mr Storey said WoolProducers believes that the implementation of the recommendations from the review of performance of AWI is of crucial importance to the success of this cohesive approach.

“A vast majority of the recommendations have already been implemented by the AWI board, we just hope the last five or six can be dealt with and the proposed extraordinary general meeting in March is the end of the matter,” Mr Storey said.

“WoolProducers are very firmly of the view that we want the recommendations implemented and then AWI can get on with what they do well.

He said the recent WoolPoll result didn’t reflect any discontent or lack of confidence within the industry.

“The zero vote was the lowest figure it has been in the history of WooPoll, which is incredibly pleasing,” Mr Storey said.

“It’s history now, the growers decided how much money and what gross percentage of their wool cheque they want to commit to research and development and marketing for the next three years.”

Sponsored by
Eight finalists to contest prestigious Zanda McDonald title
Test
Seven state and territory emerging beef leaders set to take careers to next level
Test
The Central Coast has lost a dedicated family man who was passionate about championing young people and helping his community.
Test
Questions are being asked about "junk" carbon credits being issued to Australian farmers for land they never intended to clear.
Test
Large cattle and cropping property, Airlie, in north-east Victoria is on the market as the well-known Sinclair family gears up for succession.
Test
Lathering your hair with sheep shampoo, even touching up your lipstick - these are just some surprise new uses being tested for wool.
Test
Australian Wool Innovation will look to commercialise the market component of its oft-criticised digital platform WoolQ.
Test
As Australia prepares for the next bushfire season, aerial imagery is being extended over more of rural Australia to help responders reach the right places faster.
Test