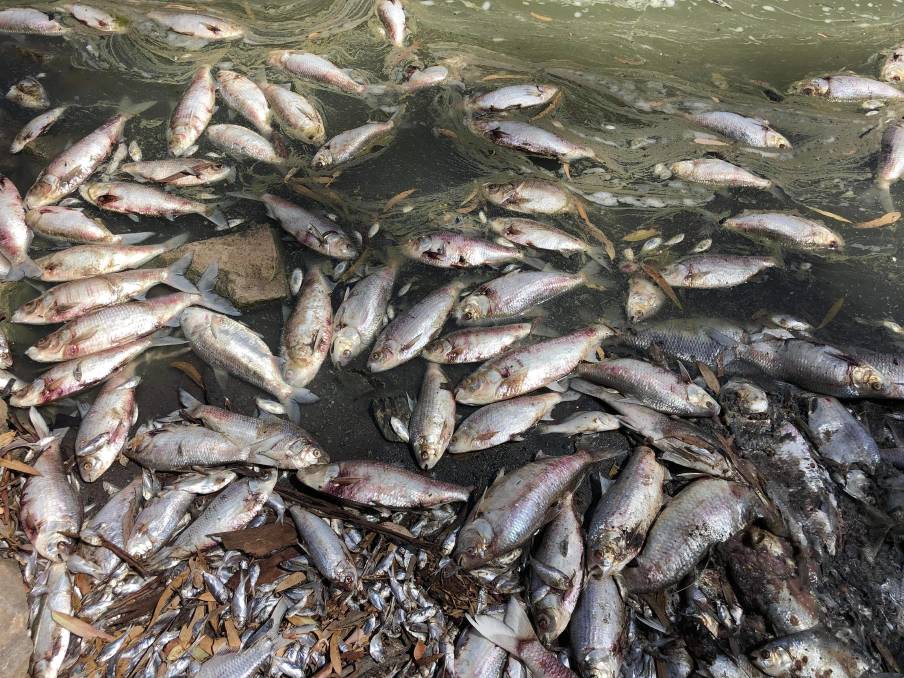 Dead fish along the Darling River near Menindee, NSW, after the second major fish kill in the region within a month. Photo: ROB GREGORY

A welcome flood event which filled Menindee Lakes 2016 is now turning into a torrent of abuse for water managers in the Murray Darling Basin.

Public outrage centers on the NSW Government and the Murray Darling Basin Authority, with pointed criticism aimed at the staged release from Menindee Lakes.

The MDBA and NSW Regional Water Minister Niall Blair are shouldering blame from all quarters for the current parlous conditions in the far-western NSW lake system.

Up to one million native fish are reported to have perished due to lack of oxygen following an hypoxic event spurred by dramatic weather. There was a previous, smaller fish kill over Christmas.

Mr Blair and the MDBA emphasise the impact of drought and the unusual weather event.

Fish kills occur naturally, but at question now is the role of water take for irrigation, almost all of which goes to cotton.

Since mid-2017, no general security water has been allocated to irrigators in the Northern Basin.

In the past 10 years, around 20 per cent of Barwon Darling water has been extracted for irrigation.

Like many reaches of the drought-hit river system in NSW and Queensland, blue-green algae flourished in the Darling River as daytime temperatures reached above 40 degrees Celsius.

Then last week a cold front came through, dropping around 15 millimetres of rain and the temperature by 15 degrees.

Then, bacteria that break down algae went to work eating the dead organic matter and in the process chewed up the oxygen in the water, creating a hypoxic environment and effectively suffocating the fish stuck in the isolated river pools.

The Menindee Lakes were engineered into a regulated water storage system in the 1960s.

At the time, interstate water sharing arrangements were put in place that mandated water sharing between NSW upstream and Victoria and SA downstream.

These arrangements are reflected in the current Basin Plan rules, which were put in place in 2012.

They state that when the volume of water in Menindee Lakes exceeds 640GL, the MDBA calls the shots on water releases, until there is less than 480GL in the lakes - which is considered a reserve amount in storage.

The MDBA, which oversaw release of the floodwaters from 2016, says the high evaporation rates from Menindee Lakes dictates the water must be released to water downstream reaches of the river, provide a catalyst for native fish-breeding and to refresh the Lower Lakes in South Australia.

However, locals say more water should have been held back in reserve for the Darling River in the Menindee Lakes after the 2016 floods, so water could be released to replenish the river.

Between July 2016 and December 2017 the volume of water in Menindee Lakes fell 1610GL, according to Water NSW figures.

The MDBA, which was in control of the water, released 680GL. And evaporation accounted for around 931GL.

Over the 18 month period, the lakes dropped below the 480GL threshold and NSW took control.

Since December 2017, NSW has managed Menindee under drought requirements, with the remaining water dedicated to local requirements.

On average, about 4000 gigalitres flows into the Barwon Darling system from its tributaries.

Over the past 57 years, the Darling River has stopped running 57 times at Bourke - which is upstream of Menindee Lakes.

“The community is up in arms about this release. The MDBA have continued to ignore the community’s significant concerns,” Ms McBride said.

“We are already at crisis management point for Menindee Lakes. We’re looking at a dry river by the end of 2018 now.

“Environmentally, we are killing off an already fragile environment. A depleted lake and dry river will stop the spawning of native fish which populate the entire river system.”

“We run the Menindee storages as part of the the Murray connected system,” Mr Glyde said.

“Unfortunately, it just makes most sense to use the water in the system that evaporates the most.

“Menindee Lakes are very large and shallow. Between 20pc and 30pc will evaporate in a year and there’s no point in losing it.

“Not everyone agrees with that, but it’s the bottom line , that’s the harsh reality of the Australian climate that drives those decisions.

Mr Glyde said the decision to release the water was the right one, at the time.

“The difficulty is we have to make the decision without knowing what the weather will be.