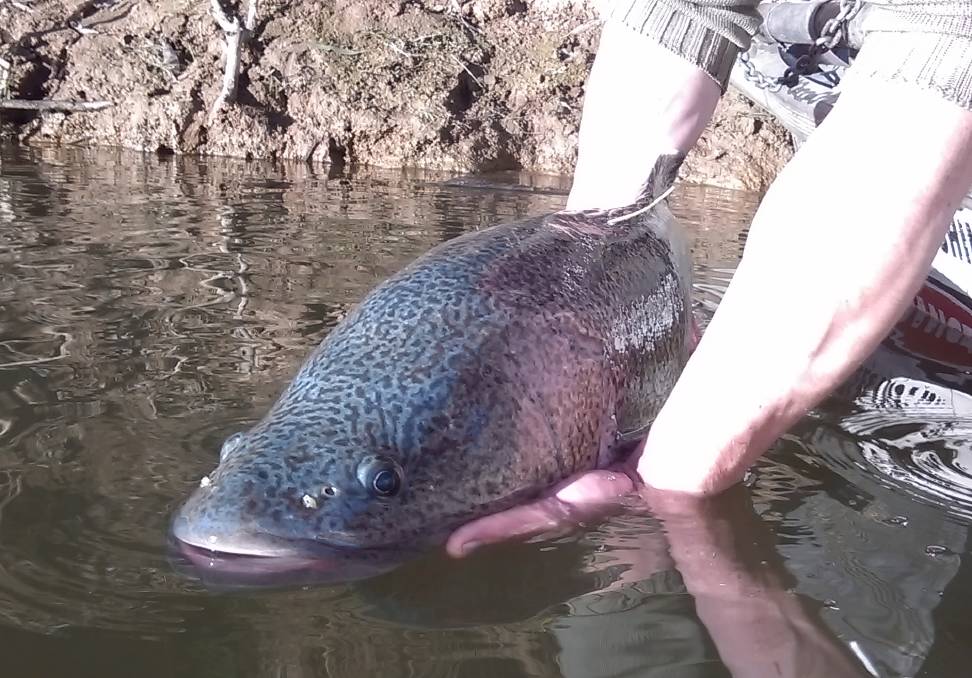 A Murray Cod is tagged and released.

Water releases from Menindee Lakes be fixed, to make sure there's no more disastrous fish kills, according to a native fish expert.

There’s a better way to revive the decimated Lower Darling River, from Menindee to Wentworth, with the volume of water currently allocated to it.

That’s according to native fish expert and Adjunct Research Professor at Charles Sturt University Martin Mallen-Cooper, who has studied fish ecology and the historical flows in the Far West NSW River for decades.

He says river operators should maintain a relatively modest amount of water in Menindee Lakes throughout the year and release low flows to create flowing water in the river channel, which is the sort of habitat that allows native fish to thrive.

That would overturn the decades old ‘use-it-or-lose-it’ strategy of river operators and force a rethink of how we manage current water allocation.

People have been left wondering how thousands and thousands of mature native fish such as Murray Cod, golden and silver perch and bony bream perished in recent weeks - less than two years after an unusual winter flood filled the Menindee Lakes in mid-2016.

Between July 2016 and December 2017 the volume of water in Menindee Lakes fell a whopping 1610 gigaltires, according to Water NSW figures.

MDBA figures show 680GL was released, while evaporation accounted for around 931GL.

“We can learn a lot from what’s happened and change how we manage Menindee Lakes,” Dr Mallen-Cooper said.

When floodwaters fill the ephemeral Menindee lake system, which was engineered into a storage with floodgates in the 1960s, the first priority for river operators from NSW and the MDBA is to ensure water is managed efficiently.

Put simply that means sending the water downstream before it evaporates from the shallow lakes in the hot, dry summer months.

But Dr Mallen-Cooper says water efficiency and evaporation should not be the only priority given recent events, and it may not be that hard to prevent catastrophic fish kills.

In fact, we may not need further water recovery from irrigation to make significant headway.

“Recreating natural habitat in the Lower Darling isn’t hard, because of the narrow channel. You might only need 500 megalitres a day for fish populations to recover and improve, compared to say 2000ML a day in a wider channel; and probably only 100ML a day in crisis periods to prevent fish kills,” Dr Mallen-Cooper said.

“The aim is to create a visible current. Native fish thrive in that. It’s about hydraulic diversity, with fast and slow flowing sections.  Adding snags and other habitat creates even more diversity” he said.

Each year Murray cod spawn in spring. A flow of around 500ML a day at this time would help them breed, while perch need a big pulse every five years or so down the Lower Darling and into the Murray to help them migrate through the system and breed.

“There would also be huge benefits to species like river mussels, snails and insects that in massive decline and are dependent on flowing water. They can tolerate short periods of no-flow, typically less than 30 days.  In those extreme 1-in-100 year events, like in 1902 when the river stopped for 11 months, they would likely recolonise from other flowing streams, but would then need near-continuous flow for years to repopulate,” Dr Mallen-Cooper said.

“But more frequent periods of no-flow makes it harder and harder for them to survive.”

Dr Mallen-Cooper said it may take at least 10 years or longer for the Lower Darling fish population to recover but “it’s definitely achievable with good management”.

The Murray Darling Basin Plan requires state governments to deliver infrastructure works to save water. NSW Government plans to re-engineer Menindee Lakes to make it smaller, and move water through them more efficiently.

At the same time, outside the Basin Plan arrangements, NSW is building a drinking water supply pipeline from the Murray River at Wentworth to Broken Hill.

It’s forecast that the Lower Darling would be dry more often when these works are operating.

Dr Mallen-Cooper said while there may be some benefits in water efficiency, plans that increase no-flow periods would seriously harm fish populations that have already taken a big hit.

“Adding weirs to the lower Darling is also not the answer; these will reduce flowing water habitat and hydraulic diversity, making conditions worse for native fish and better for blue-green algae and carp.”

Sponsored by
Mature cow body composition, immune competence and tropical adaption under the spotlight
Test
Australia's farm production has been forecast to surge past $66 billion with a bumper crop pushing forecasts $400 million higher than expected.
Test
A-UK FTA a 'quality outcome with a long-term partner', say beef, sheep leaders
Test
Urea prices have climbed steeply over the past month - what is driving the worldwide price rise?
Test
Australian Dairy Industry Council welcomes announcement on FTA with the United Kingdom.
Test
Federal Environment Minister Sussan Ley is open to legalising a new poison which could potentially decimate mice numbers along with non-target species.
Test
Dairy chiefs call for more protection for co-ops
Test
Another fall in the Global Dairy Trade auction on Tuesday night is not a concern, according to dairy market analysts.
Test