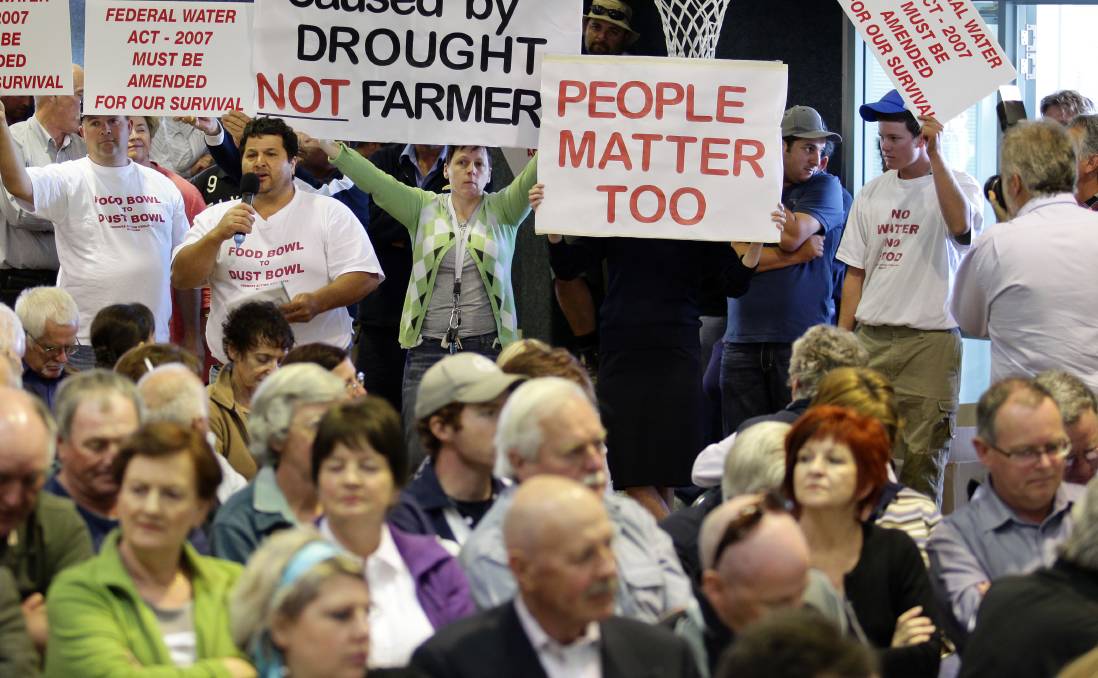 Social impacts of water water reform have always been front of mind in Murray Darling Basin Plan, like at this community consultation meeting in Mildura, Vicotria in 2010. Photo by Angela Wylie. October 2010.

When 2018 drew to a close the path to complete water recovery under the Murray Darling Basin Plan was clear. But in just one month 2019 has opened the prospect of more major ructions in water reform.

There’s a national furor over fish kills in the Darling River; scathing findings against the Murray Darling Basin Authority from the South Australian Royal Commission into the Basin Plan; and dire warnings from the Productivity Commission (PC).

Unfortunately a lack of stored water means there’s not much that can be done about the fish kills now.

But the PC and Royal Commission have raised a real prospect of change to supply measure, which are an element of the Basin Plan designed to limit water recovery from irrigation.

Both bodies said significant reform is needed which could increase both the cost to taxpayers and water recovery from irrigators.

It’s unlikely there’s enough time for legislative changes within the brief sitting time set down for federal parliament before the election, due by May 18, but the mood for change to the Basin Plan water recovery will be hard to resist.

The Murray Darling Basin Authority is under most scrutiny after Royal Commissioner Bret Walker found that the federal agency substituted a scientific determination of the volume of water recovery for a secretive, politicised outcome in an effort to be keep the states onside with the reform.

Mr Walker said water recovery must be increased under a new scientific assessment.

This, his most ambitious recommendation, is unlikely to gain the necessary bipartisan support for new legislation.

But not so the 37 state-run water-saving supply measures, which are funded to the tune of $1 billion by the Commonwealth.

Mr Walker said the MDBA did not deliver a credible scientific process.

“The habitual behaviour of the MDBA, and to a lesser but alarming extent the CSIRO, is marked by an unfathomable predilection for secrecy,” he said.

“Best available scientific knowledge is neither secret nor classified. It is available to the scientific community, and the broader public. It involves processes and actions that represent science that are capable of being reviewed, checked and replicated.”

The scathing findings and increased public scrutiny put pressure on a future government to demand a do-over.

Supply projects make up the 605 gigalitre bucket of so-called ‘downwater’ the states can implement to deliver equivalent environmental outcomes, instead of cuts to irrigation entitlement.

The large-scale projects include increasing the capacity of stretches in the river to deliver more water, changing operating rules, a drinking water pipeline to reduce Broken Hill’s reliance on Menindee Lakes, and new works to inundate floodplains more effectively.

The PC’s five year review of the Basin Plan found despite the fact the MDBA has ticked off the projects, their implementation poses “significant risks” due to a lack detail of how they will actually work and how much water they will save.

The MDBA, and to a lesser but alarming extent the CSIRO, is marked by an unfathomable predilection for secrecy - Bret Walker

The report noted that if policy changes which are wrapped up in the increased capacity available via supply projects are not delivered the overall water recovery target could increase from 3200GL to 4000GL.

“If major shortcomings in current institutional and governance arrangements are not addressed, these projects are likely to fail or be implemented poorly,” the PC report said.

Failure means more delay to the completion of the Basin Plan and the shortcoming in water savings would be made up by taxpayer funded buybacks, estimated to cost more $564 million, while the environment misses out on benefits, the PC said.

“It’s an error in law to account for water reduction on the supply measures and toolkit measures aren’t in place,” Ms Slattery said.

“You can’t make an adjustment for something that hasn’t happened yet.”

“The MDBA’s position became problematic when it started forcing numbers to work with the recommended reduction targets for supply measures and the Northern Basin Review.

“The supply measures are there purely to chase a number, rather than achieve real world outcomes.”

“We need to pause the plan and have a good look the outcomes so far.

“We should take the threat of future water recovery off the table for a while, so we can have an honest discussion about what’s not working in the plan. We need the space to be honest,” Ms Slattery said.

“What has it done to agriculture and its make up and the impact of ownership on family farms competing with institutional investors, and on communities?”

Ms Slattery any review should focus on how water is used for the environment.

“Does water delivery into SA actually add to environmental flows, or is it just a re-branding of unregulated flows as environment water?

“It’s also pretty indefensible to have the Coorong as a targeted outcome if water is just being held in there for recreational boating.”

The MDBA did not appear at the Royal Commission. Mr Walker said the agency had acted outside the Water Act by compromising on scientific calculations of water recovery.

MDBA chief executive Phillip Glyde said he rejected “any assertion” that his agency has acted unlawfully in anyway.

“The MDBA is confident that the Basin Plan has been made lawfully and is based on best available science.  There is extensive documentation in our published reports to support this,” Mr Glyde said.