A new climate tool, based on a worst case scenario, highlights average temperature rises in the coming decades. 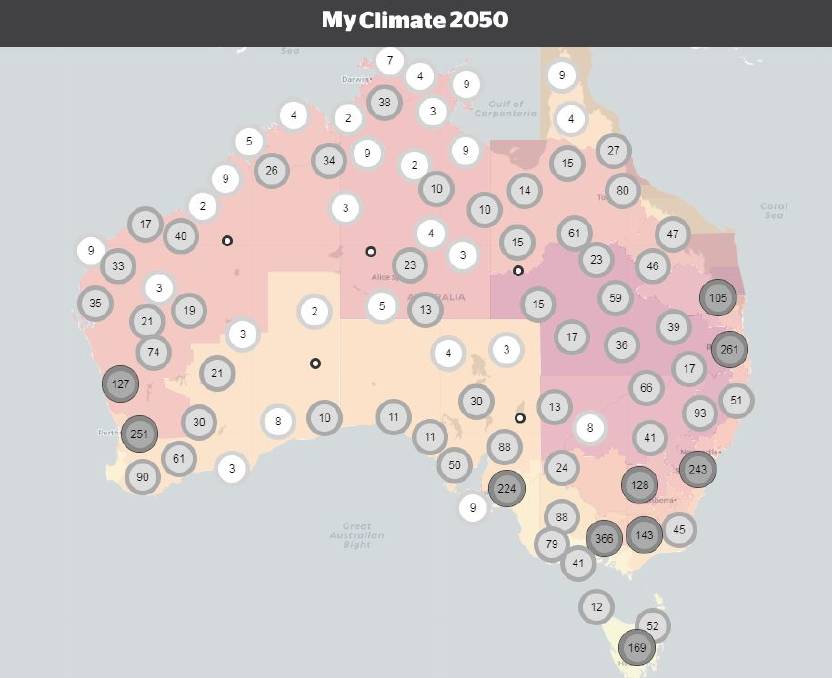 A screenshot of the MyClimate 2050 tool.

A new climate tool developed by Australian academics has forecast an end to winter as most Australians know it by 2050 and the emergence of a new season dubbed 'New Summer'.

Researchers from the Australian National University's School of Art and Design teamed up with colleagues from the ANU Climate Change Institute to develop the visual climate tool for the Australian Conservation Foundation.

Using the online tool, people can click on thousands of locations across Australia, divided into federal electorates, to see how the local weather in their home town will change by 2050. View the tool here. https://myclimate.acf.org.au/

ANU senior lecturer Geoff Hinchliffe the results show that by 2050, there would be "no period of a sustained or lasting winter".

“In 30 years’ time winter as we know it will be non-existent. It ceases to be everywhere apart from a few places in Tasmania,” he said.

The tool shows how many degrees the average temperature will rise by in each location and how many more days over 30 or 40 degrees a place will have in 2050 compared with today.

Queensland contains the most of the top 20 hottest electorates, with nine on the hot list, followed by seven in NSW.

The Queensland electorate of Groom, held by Liberals MP John McVeigh, topped the list with projections showing average temperatures could increase by 4.77C by 2050.

David Littleproud's Queensland electorate of Maranoa followed, with a projected increase of 4.64C.

ACF chief Kelly O'Shanassy said many of the electorates with the highest projected increases were represented by MPs who do little on climate change.

Of the 20 federal electorates most at risk of rising temperatures, eight are held by the Nationals, six are Labor-held and five are Liberal seats.

"With current winter conditions disappearing and much of the year dominated by traditional summer conditions, plus a new extreme summer," she said.

"It is disappointing that many of the federal electorates found to have the highest projected increases in average maximum temperatures are represented by MPs who do little to champion climate action, or worse, deny the established science."

The modelling was done by the Australian National University using data from the Queensland government's LongPaddock project.

It uses the highest global emissions pathway modelled by scientists, which assumes emissions continue to rise and accelerate.

“As well as the data, we also focused on developing the most effective visual forms for conveying how climate change is going to affect specific locations,” said Dr Hinchliffe.

“That meant using colour, shape and size around a dial composition showing a whole year’s worth of temperature values in a single snapshot.

“It makes it visually rich and interesting and gives a lot of detail in a way that connects emotionally with people by locating it in their own town,” he said.

“We concentrate on visualisation and storytelling. We don’t want to misrepresent the data or suggest things that aren’t true so the visualisation was instrumental in conveying the data in a way that can be interrogated. It’s like a graph, but more poetic,” said Associate Professor Mitchell Whitelaw.

“The research and innovation here is in the visualisation and compilation of all this data. Our innovation is in the way this existing data is communicated and presented - hopefully in a memorable, engaging way,” he said.