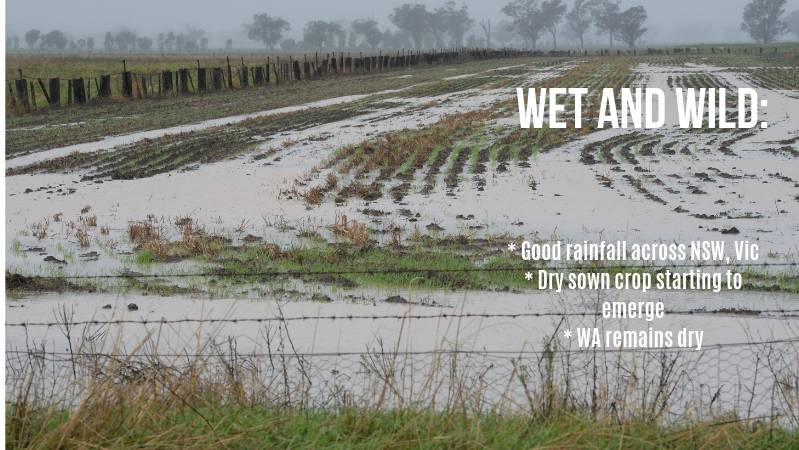 There has been excellent rain over parts of southern NSW and north-eastern Victoria.

Some parts of the country have had their best autumn break in nearly a decade - find out where the rain fell.

CONFIDENCE in the cropping sector on the east coast is slowly rebounding after good general rain across large swathes of the nation's winter cropping belt, however growers in the north caution much more is needed.

There were particularly good falls across the Riverina and the eastern two thirds of Victoria's cropping belt in the past week, with widespread falls of over 50mm.

Coastal South Australia has had a break to the season, but most of WA remains dry.

Northern NSW / southern Queensland are points of interest. There have been good falls in the past month of up to 120mm but the extended dry preceding the rain means not all farmers are fully committed to planting a winter crop.

"The old saying is that a big drought can only be ended by a big flood," said Liverpool Plains farmer Xavier Martin, who said while there were areas with high tallies in the past month there were also parts of his region that have received totals virtually negligible given the need for solid banks of pre-seeding moisture in cropping systems throughout the zone.

He said the heavy soils of the area required 50-60cm of soil moisture before farmers would be happy with the risk of planting.

"There may be some areas that have had the kind of rain necessary, but there's plenty that haven't."

At the other end of NSW, Riverina farmers are reporting one of the best and most even autumn breaks in recent years.

"We've had very heavy rain, overall it is a game-changer in terms of how it sets up the season," said Corowa district farmers and Riverina Plains chairman Ian Trevethan.

He said there was a widespread 50mm across the north-eastern Victorian and southern NSW catchment zone of research organisation Riverine Plains, with heavier falls, some in excess of 100mm, around Albury.

Mr Trevethan said there had been a lot of crop dry sown in front of the rain.

"It's a great start for the cropping but perhaps even more so from the livestock point of view.

"There's a lot of livestock in the area and people have been feeding very heavily since the stubbles finished, so it is good to know that there will be feed available from things like grazing wheats before things get too cold into the winter."

He said some crops which had begun to emerge on previous light rainfall were now up and added plants germinated by the recent rain would soon be visible.

"Apart from the far south, in areas around Albany, there really hasn't been a break.

"People are putting crop in dry, but there is certainly no rush, they aren't working huge hours to get it in, especially with no rain on the immediate outlook."

He said in spite of the short-term weather outlook confidence was strong after a good season last year.

"Overall I think people are approaching the season with a fair deal of optimism, they are certainly not worried about the rain not arriving as yet."

Andrew Weidemann, Grain Producers Australia chairman, said the rain across eastern regions was good for confidence, but added it was not a drought breaker for northern croppers.

"The tallies may look impressive but the soils up through NSW and Queensland mean there needs to be a lot of rain before there is too much confidence."

In eastern Victoria and southern NSW, he said farmers were ecstatic with the opening rain.

"I'd say it would easily be the best break for many for six or seven years."

"There was a lot of talk about a dry autumn so that was probably weighing on peoples' minds but then, out of a storm-driven front, which in south-east Australia often only delivers lighter falls, we had a good, fairly general fall.

"We certainly saw variability in terms of the totals, but there was a good, wide band that had a pretty decent drink, so that is good news."

The variability was also a feature of the rain in northern NSW.

Mr Martin said while areas such as Boggabri have had good rain, places relatively nearby, such as around Mullaley, had not.

"You can't go on the BOM tallies for the townships as it can vary markedly just nearby, not everyone has had that good rain, some places have had less than 20mm all up."

"As a rough rule, the places that have had more than 100mm will really be hooking in, less than that and people are assessing the situation.