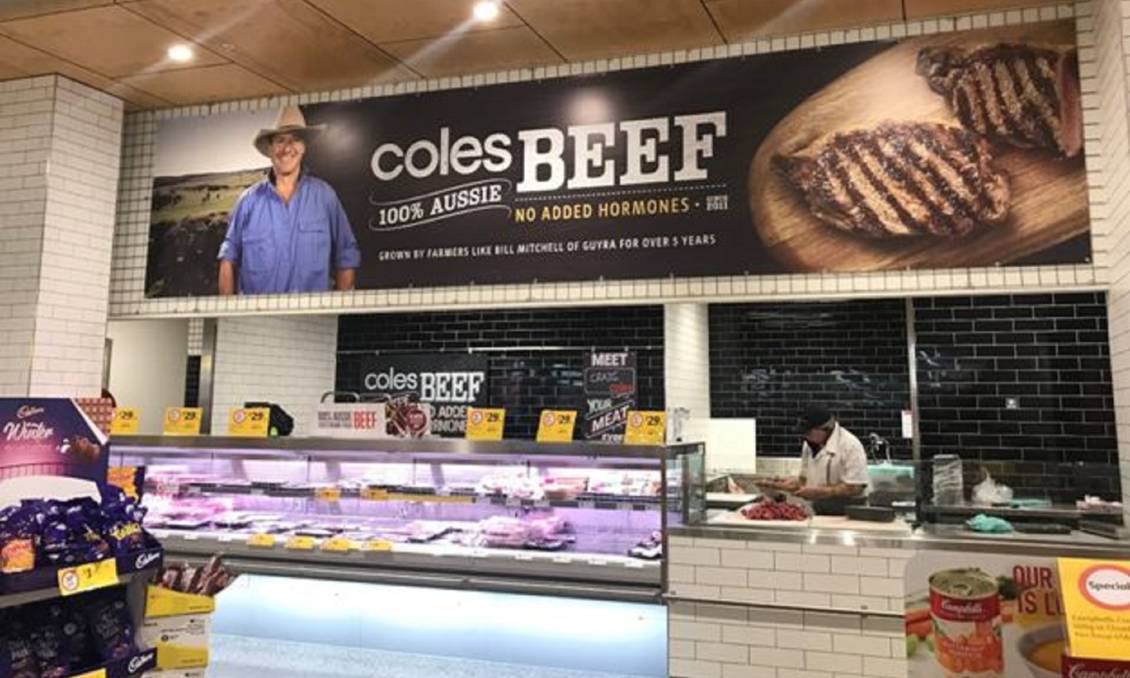 Hormone-free: While not actually saying HGPs are bad for humans, the subtle message is clear - Coles beef producers don't use HGPs so beef produced with HGP implants must be bad.

Marketing by the major supermarkets walks a fine line between claiming to deliver cheap products to customers while also giving suppliers a fair deal.

Supermarkets have positioned themselves as pivotal in providing Australian grown produce to the Australian consumer, however over time, this position has come at the demise of small traditional retailers such as butchers and green-grocers.

Due to the dominance of their market share, it has also allowed them to influence and determine the specifications of the products they sell. While this would naturally be in response to customer demand, there is evidence that the supermarkets are not passive respondents to demand, they also drive influence to suit corporate objectives.

The major supermarkets spend "obscene" budgets on marketing and market research. Their public image is carefully crafted, with seemingly two distinct and oft-repeated messages. These are best summarised as "we are socially responsible, to the point that we have great relationships with our suppliers (farmers)", and "we are constantly reducing prices to the benefit of our customers". Noble objectives but when put together they appear to be oxymorons.

Taken at face value, the strategy and value statements of the major supermarkets purport to deliver cheap products to customers while also providing suppliers with prices and supply agreements they will be delighted with. A tough tight rope to negotiate!

Adding fuel to the fire are the advertising campaigns of "down down" from Coles (now re-introduced) and "cheap cheap" from Woolworths. While cringe-worthy and basic in content, they exemplify a story of lower prices which could only translate negatively back to prices received by suppliers.

The argument that the cost of this strategy is somehow absorbed in the business so both customers and suppliers come out as winners doesn't resonate. Shareholders would expect that the cost of any price discounting is passed back to suppliers.

There are a number of examples where the impact is directed back to the farm gate. $1 milk and $5 a kilogram beef mince are particularly detested by farmers. Surely these campaigns can only be good for customers, and possibly the supermarket in attracting new customers. The loser is the farmer and the relative industry.

There is hardly a better example than Coles' high-profile campaign boasting that since January 2011, all beef sold in its stores has been free of hormone growth promotants (HGPs).

While not actually saying HGPs are bad for humans, the subtle message is clear: Coles beef producers don't use HGPs so beef produced with HGP implants must be bad.

HGPs are supplements of naturally occurring hormones that reduce farming costs because they assist cattle to produce more beef from less feed and water.

While there are some public apprehensions expressed over HGP implants, science is certain. Meat from animals implanted with HGPs is safe for human consumption.

In 1998, the World Trade Organisation found that any HGP ban was not supported by science and was inconsistent with the European Union's WTO obligations. Nonetheless, the EU ban remains in place.

There is evidence that the supermarkets are not passive respondents to demand, they also drive influence to suit corporate objectives.

Further to this, a Meat & Livestock Australia publication HGP and beef production, A best practice guide 2011 reports that daily weight gain can be increased by 10-30 per cent, feed conversion efficiency by 5-15pc and carcase leanness by 5-8pc. This can represent an economic benefit of $30-80 per head over untreated animals. The greater efficiency HGP implants can provide to the beef industry can also be translated into a "lighter footprint", that is, a HGP implant may result in less water and feed required, as well as lower carbon produced.

While these are not conclusive reasons to promote implants, and many producers choose not to use HGPs regardless, Coles' beef purchase policy has renounced this technology as an option for the beef industry to reduce costs and lower emissions.

Of course, the major supermarkets are very aware of the need to reduce emissions and are taking leading action in other practices. Despite growing store networks, carbon emissions have declined over the past five years due to a range of energy saving initiatives and a focus on reducing refrigerant gases.

Sustainability reasons aside, the beef promotion is "no added hormones" and on the bottom line, increases the cost of producing beef. But not to finish there, the Coles advertising also pitches to the customer the added rider, "no added cost!"

Anyone with an idea about economics will deduce from this equation that the producer is the net loser, with the customer unaffected, apart from perhaps the feeling that they will not be "compromised" by poor quality HGP beef. Coles has manufactured a marketing campaign conflating an issue for commercial benefit.

There is however a counter to this difficult economic equation supermarkets are attempting. While domestic markets for beef, lamb and milk are important, the major demand now and increasingly into the future is from overseas markets. Domestic supermarkets will need to compete with not only traditional export markets who have a taste for quality Aussie produce but also the emerging challenge from developing markets, where demand is on an upward curve.

The consequence of this will be higher retail prices driven by growing export demand, and for some products, it will also mean the continuation of the decline in domestic consumption, especially in the red meat market.

Is it fair game?

Many of the statements made by the major supermarkets regarding the quality of the product can be viewed as disingenuous. While there is nothing wrong with promoting the benefits of shopping in their store, it is the consequences on producers that are of concern.

Inadvertently, the promotion of dubious quality claims like "HGP-free", reduce the beef industry's capacity to lower costs. The curious fact is that reducing costs is a key plank in the supermarket's promotional activity.

The relationship of producers and suppliers with major supermarkets is a difficult one. On the one hand, they are the major pathway to domestic customers, providing an efficient supply chain. It cannot be ignored however, that as businesses aiming to generate shareholder value, they will place their commercial interests at the forefront, sometimes at the expense of producers.